If there is an archetypical racing dad, it is Earl Hayden, father of Nicky, Tommy and Roger Lee, all racing riders. The Hayden patriarch has also told the story of his family in a book, The First Family of Racing, and he is a well-known and beloved figure in the racing world.

Earl sat down in front of the camera to talk about his most famous son, Nicky’s career from behind the scenes. You can watch the video above, but for your convenience, we have extracted the more significant excerpts.

AN EARLY PASSION - “Before he was three years old, we would tell him bedtime stories about racing and he would want to go out to the barn, standing in the cold in his diapers waiting by the door, wanting to pull the door up so that he could just sit on a motorcyle. We started practicing certain things at about 2 and that’s about where it started. Even as a little kid, the first one at the track and the last one to leave. At home he was like that too with his training and work habits.”

THE EXAMPLE OF CHAMPIONS - “When he was young I would tell him stories about Wayne Rainey, Freddie Spencer, Ken Kenny and I would always tell the story and if he didn’t win the race, I would have to tell it all over again. At that age he was already starting to talk about being ‘world champion’ even without me telling him. By the time he started school, people would tell me that the odds were probably something like 10 million to 1, so we knew it was not going to be easy, but that was always his goal, to be world champion”.

FROM AMERICA TO THE WORLD CHAMPIONSHIP - “My thinking was, let’s conquer America before we try to go conquer the world. As soon as we knew that it looked like he would be AMA champion, he started thinking about the world championship and MotoGP and then Honda. In 2016 he was able to achieve his goal.”

FAMILY ABOVE ALL - “I see in his interviews,  he always says ‘my family was there”. All three of my sons, when they win races, if we’re there, they always say ' the most important thing is that my family was here'. I tried to teach him that there is another life after racing”.

SBK - “You can’t look back on ‘could have’ or ‘should have’. I knew he was not happy racing for 15th and nobody has ever won the WSBK championship and the MotoGP world championship. I have really supported that and now he’s on a good factory bike and wants to win the championship.”

THE IMPORTANCE OF HARD WORK - “Nicky is hard worker, a family guy and he never forgets where he came from. He is just a good kid and that means more than being a world champion. That is what makes me the most poud. He has great work habits and I have never seen many like that in my life. He never took any shortcuts. He doesn’t want any special treatment and he has not changed, not even with his family.” 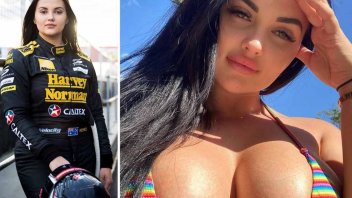