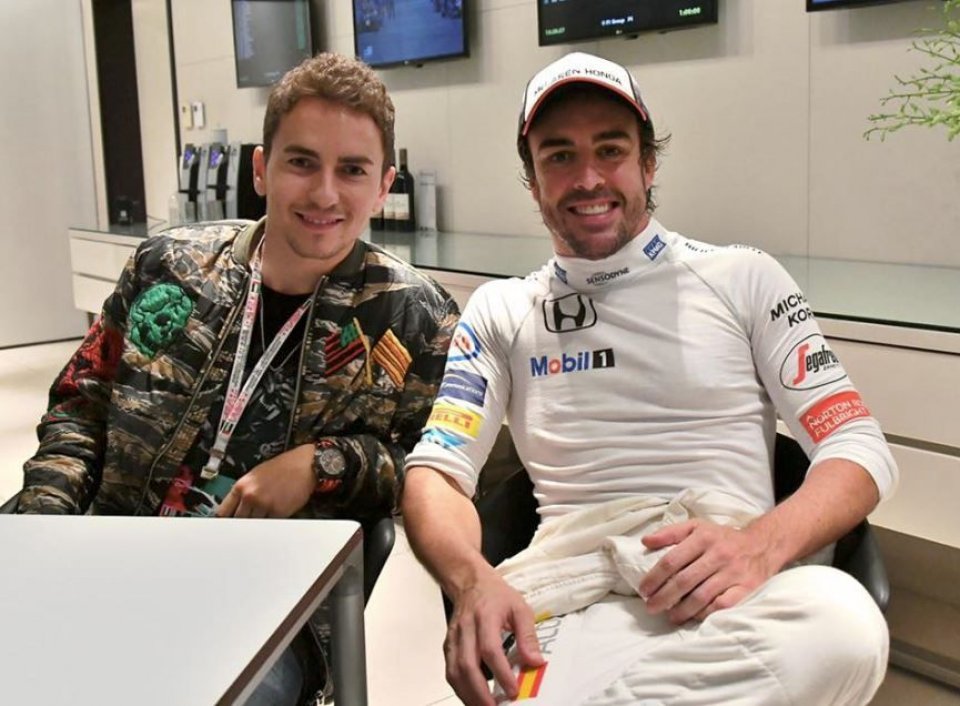 The season has only just ended and, before dedicating himself to the holidays, Jorge Lorenzo made a stop in Andorra to open the doors of his World Champions Museum. More than one hundred pieces on display from past and present champions. Even his Yamaha M1 is there, with a special inscription in honour of the last race in Valencia. Perhaps he will enrich the collection in the future with the Ducati GP17… who knows?

Over the past four years, you have collected memorabilia from various racers. Of all the items, is there one that holds special value for you?

“Senna’s helmet is without a doubt a particular piece, because Ayrton is a unique Champion. Obviously, my Yamaha M1 also, the bike that I rode to win the MotoGP title three times.”

Last weekend you were in Abu Dhabi for the last F1 race. If you were to make a comparison with MotoGP, who would Rosberg, Hamilton, Verstappen and Vettel be?

“It’s hard to say. Hamilton could be Marquez, fast and explosive. Given the young age, I could compare Viñales to Verstappen. I think I am most similar to Alonso, both cold and determined. We do not make many mistakes. Valentino, on the other hand, could have been Schumacher.”

You tested the F1 car too. Did you have the same sensations as the first time you got on a MotoGP bike?

“It was a fantastic day. I feel privileged to have tried both an F1 car and a MotoGP bike in my career. The Mercedes is something rather impressive, truly extreme, especially on a flowing track. It even gets to the point where the underbody touches the asphalt.”

Were you more surprised by the first test with Ducati or the one with Yamaha?

“You can’t really compare. They are different bikes and sensations. The Ducati is an Italian bike, a special brand with fans all over the world, like the Ferrari in F1. It is something unique.”

What was your first thought when you got off the GP16?

“I can’t say too much. I can only reveal that I had a big smile on my face under the helmet.”

Do you think that it is a Ducati worthy of the World Title?

“I accepted this challenge to win and I will do everything I can to achieve that. The bike will change a lot. There could be negative and positive aspects, so we will see what happens in the future.”

Viñales astonished everyone at the first test in Valencia. Do you think that it will be more complicated for Valentino than when he shared the Yamaha garage with you?

“I don’t know what kind of relationship they have, nor do I know how difficult it will be to beat Maverick. In 2017 Rossi will definitely be a year older. When I arrived at Yamaha, Vale was at the top of his game. He is certainly competitive and it will not be simple for Maverick to stay ahead of him.”

Marquez remains the favourite. Will Viñales be his true rival in the battle for the title, or will you and Rossi also be contenders?

“Marc has what it takes to be the champion and he remains the favourite. With the Suzuki, Viñales showed that he can win and now Yamaha awaits him. It’s one thing to be fast on the flying lap and another to be fast in the race. I am sure that Valentino will also be competitive, as will we on the Ducati.”

You recently posted a photo of your Porsche and then the Ferrari. Which do you prefer?

“I like to collect them. Besides the Ferrari, I also have a Lamborghini. My daily driver is the BMW or the Audi though.”

Who is your hero on four wheels?

“Senna and Schumacher, but also Hakkinen in the years of the Ferrari rivalry. In bikes, on the other hand, I have always liked Biaggi, since I was a small boy, but also Doohan.”

The best F1 and MotoGP race that you remember?

“I think Jerez, with the contact between Villeneuve and Schumacher. For the bikes, I couldn’t say… there are really so many.”