This season there have many injuries in MotoGP and teams are forced to find a last-minute substitute rider. This was the case in Ducati, for Iannone and in Honda, for Pedrosa, for example, no mean feat because it's complicated to have a stand-in who is at the level of a factory rider.

Very few riders with MotoGP experience are available to fill any 'gaps'. In this season, the most fortunate team is Ducati that, with Michele Pirro, can count on an excellent back-up solution, but this is a unique situation.

It is not a simple problem to solve, Honda team principal Livio Suppo explained that “in the past, we tried to offer the test rider role to a young rider, but it's unlikely they'll accept because they want to be racing. Looking for a substitute in Moto2 is impossible, as they'd have to renounce racing in their own class. Nicky Hayden was perfect at Phillip Island in place of Pedrosa but he had to fit that in between his SBK commitments”.

The third rider, along the lines of what happens in Formula 1, is not feasible in MotoGP.

Yamaha's managing director Lin Jarvis agrees: “It's difficult to plan anything like that. At the end of the day, in order to be competitive a rider needs to race every weekend".

Davide Brivio, Suzuki team manager, underlines that this is one of the differences between cars and bikes. “This is the spirit of our sport: the best riders race, we're different from Formula 1”.

While the three Japanese manufacturers are not structured in such a way as to allow it, Aprilia has an ace up its sleeve for 2017.

“Eugene Laverty will race with our bike in SBK and we also have some tests scheduled for him with the MotoGP. It we need a substitute, he would be our first choice”, explained Romano Albesiano. 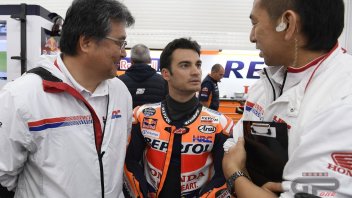 Pedrosa: "Honda considers me too small to be test rider"

After winning the first instance of the trial brought by the two former custodians of the villa in Tavullia, the outcome has been reversed on appeal
13 hours 37 min ago

Spaniard, Italian and New Zealander set for induction into the Hall of Fame in 2020 Jorge in Jerez, Maz at Mugello and Hugh later in the year
1 day 12 hours ago

Last week a member of the MotoGP family lost his life.Here are the details of his funeral and a link to a memorial fundraising page in honour of Gary
3 days 6 hours ago

The riders had complained about too many holes: new asphalt for Turns 1, 2, 9, and from 16 to 19, including the return straight.
4 days 11 hours ago