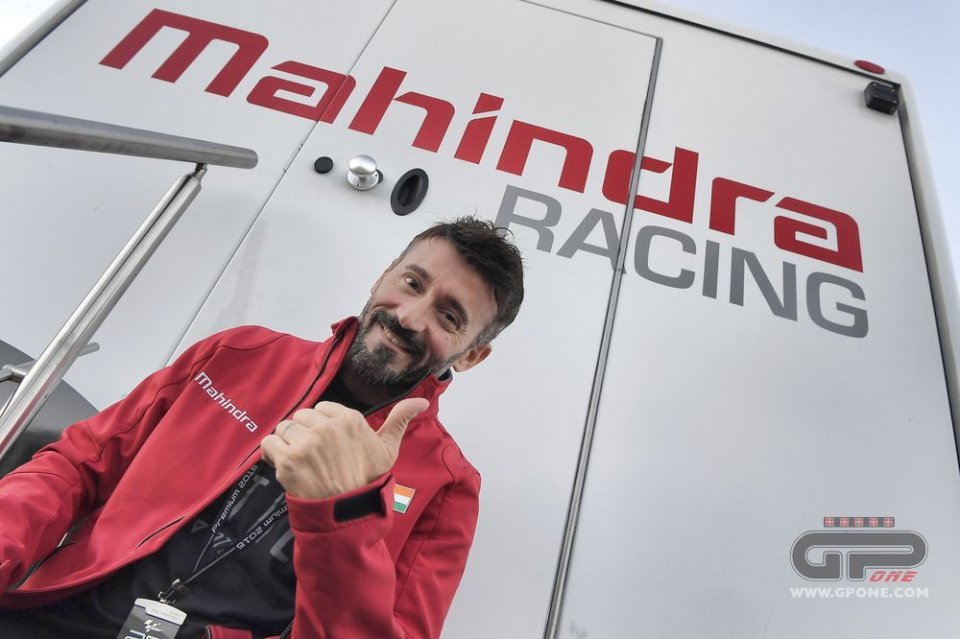 The paths of former rivals Max Biaggi and Valentino Rossi may soon cross, with one once again in front of the other, but this time as team managers. Biaggi today confirmed his collaboration with Mahindra and will manage a CIV team, with the aim of moving to the Moto3 championship in the not too distant future.

Will it be Max against Valentino once again?
“Maybe one day my riders will battle his, but we're just at the start. First we need to build an identity, before reaching the world championship”.

Will you only be a team manager to your riders or also a maestro?
“I already have a training programme in mind for the winter, with specific preparation. Perhaps they won't need it right away but it's a way to lay down a base”.

Like with Rossi's Riders Academy…
“I don't want to compete on that level, I will have just two riders, I don't want a school but a team. I want to turn young guys into professional riders”.

Do you want to give them what you never had?
“I started in a way I wouldn't wish on anyone. I didn't even have a mechanic, me and my dad didn't even know how to change the gear ratios. In the national championships, if you have a good bike you're already 85% there but many don't even have that”.

Why have you chosen Mahindra for this adventure?
“Because many people work there who were with me in Aprilia, it's like going back to my 250 days. There's a lot of Italy in Mahindra and they want for nothing. The Besozzo base is well structured, for example they have a test bench that Aprilia has only had since this year and Ducati has a couple. The aim is to win”.

You've just begun, what are your next moves?
"I've always been on the side of the fence, there are many things for me to learn and organise. The team will be composed of 5 people, to of whom have won world titles”.

A good starting point…
“It will be a group of people with whom I've already worked, perhaps a little wasted in a national series. But the aim is to create a structure with which we can move to the world championship in a year or two”.

Why the CIV championship and not the CEV?
“The CEV is better in many ways, but an Italian can't go to a championship that's not his. The team is mine and we need to find sponsors. In my team, nothing will be lacking and we need to aim for good results, even though I know how hard a fight it will be”.

Have you already decided on bike colours?
“Dark, but you'll see them soon. We'll present the team in mid December in Val Gardena”.

One day, your son Leon might ride for his dad's team…
“For now he's playing football and I'm keeping him away from bikes (he laughs). He says he wants to be a footballers or MX rider, but I don't know where this idea came from”.