Particularly since signing with Ducati, with the certainty of a place in the 2017 game, Marco Melandri has been following the final phase of the 2016 SBK very closely, a finale that saw Johnny Rea secure his second consecutive title but also the total domination of Chaz Davies and his highly evolved Panigale R.

The Ravenna rider has races at tracks around the world for many years and his opinions on recent races are interesting: “it's been quite a distorted end to the season with Rea racing with his head, particularly in the last three or four races, we didn't see a true picture. For Johnny it was important to secure his second title, keeping out of trouble and so we only saw him race to 100% of his ability in the second race in Qatar”.

Do you think Davies would have won anyway?

“I can't know for sure, but I've watched Chaz carefully and I can say at the top of his game right now. Davies, in recent rounds, has ridden his bike... impeccably! I think it would have been difficult for anyone to be able to beat him, really”.

Watching the Panigale R have you noted any improvement in its dynamic performance?

“I have to admit that at the start of the year I was only really watching the races 'superficially'. From mid-season on I paid a lot more attention because I wanted to understand the riders' characteristics, their riding styles and the bikes on track. With regard to Davies, I've noted that he's also gone well at tracks that are theoretically more difficult, like Jerez, where you need to carry a of speed through the corners. With his riding style, Chaz has found something to make his riding more smooth, but I don't know exactly how this was done”.

What do you think of the Kawasakis? Has their performance plateaued or did they just adopt a conservative strategy?

“Considering the weather conditions, often unstable, I think Rea and Sykes were just racing to win the title; for them, particularly for Rea, it was important to avoid mistakes, this is why we haven't seen the true value of the Kawasaki. But, I repeat, a Davies like the one we've seen would have been difficult to match, even for the Kawasaki pair”.

When is your next test?

“My first test together with the other riders will be on 16 and 17 November at Aragon. I'm very interested to understand whether the sensations I had at Misano and Valencia will be the same or not. I also need to see whether my difficulties are in the areas that I think they are”.

On what areas do you need to work most?

“I think that braking is my limit right now. That used to be my strong point but, if I compare the way I brake with how Davies does it, I know I need to improve. But Chaz is also very tall... Something else I'll work on is the general balance of the bike, so that I can have good pace, without have to really force it. I'll work on finding a fast, consistent race pace in January”. 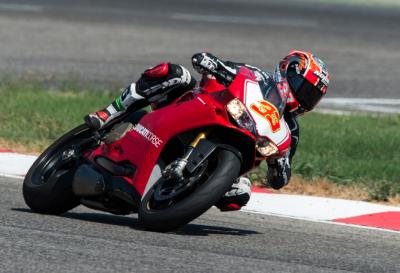 Do Davies' great results worry you or spur you on?

“I think it's always better to have a fast team-mate, for two reasons. Firstly, you have confirmation that the bike you're riding is capable of winning, and every rider likes to know this. Secondly, a fast team-mate is, for me, further motivation to do well. If you think about it, I don't have anything to lose. Until a short while ago, I was at home watching the races on TV. Now I'm back to being a rider, and so will have a positive attitude about trying to do well, the whole experience for me is a positive”.

Did you appreciate Rea's gesture towards Sykes in the final race? Do you think they were in agreement or did Rea allows Sykes to pass as an “investment” ahead of next year?

“I don't know if they were in agreement or not. I have experienced this situation in different ways... I lost a 125 title in l 1999 to Alzamora because his team-mate (Nieto)  stops on the finish line and I came home second in the championship.

Also when I helped Guintoli in 2014 I didn't really like it. It all depends on what's come before that decisive act... this determines whether you are happy to accept helping your team-mate or don't accept it at all. For me, as a rider, you should always try to win a race and the title fight should only involve the interested riders, with no team orders. But I understand that racing is not only sport and fun but also business”.

As well as Kawasaki and Ducati, who will be the third front-runner in 2017?

“The upcoming SBK championship will be very interesting because it starts with many new elements, like the new Honda in Bradl's hands, the Yamaha is growing too, something we've seen in the last races... then Eugene Laverty is back with Aprilia: I know him well and know he's not coming back to SBK to mess around, Eugene has surely received some guarantees from Noale and will be trying to win. Having more manufacturers fighting for success is a good thing”.

What do you think about the races being split between Saturday and Sunday?

“I've only experienced this in Laguna Seca in 2013, but I think it all depends on the weather conditions and other unpredictable factors, as we've seen this year. With the old format, and both races on Sunday, the riders who were more physically fit were able to make the difference and I always trained a great deal to be able to cope with the double physical and mental effort of having two races one after the other”.

Is the Panigale a more 'physical' bike than others you've ridden?

“When you feel good with the bike, the effort is minimal, when on the other hand, you have less confidence in the bike, the difficulties arise and you have to fight with the bike. It's a combination of things. But, at this level, all the bikes are demanding from a physical point of view- there's a lot of horsepower, the weight can be felt… basically they're all tough. I've tested the Pirelli tyres for the first time in a long while and I like their character, when they're new, they can help you make up for any gaps you have with the bike, but once they're used, everything becomes more difficult. This is the same as the situation I left two years ago, the tyres are nothing new to me”.