We watched a beautiful night show where Kyle Smith managed to get the upper hand against reigning champion, Kenan Sofuoglu, after 15 laps of riding at the limit in which the English rider successfully beat the Turkish rider at the finish line, making this his second win here after last year.

Smith has the typical English surname, rides a Honda CBR for team CIA Landlord and drifts all over the place, going into corners, coming out, always; his win today was well-deserved because he demonstrated just how far he was pushing the envelope from at least the mid-race point: “I am very happy, because we worked very hard throughout the weekend - smiled the bearded Kyle – I did not know if I would be able to do it, but I managed. The bike has improved in recent races and this is a fair result for the entire team.”

Sofuoglu wanted to win this evening as well. He was unsuccessful, but in any case, he wore a big smile in the Parc Fermé: the champion gave out compliments and handshakes to all, even to his “enemy” Julies Cluzel, third today with his MV Agusta 675 and second in the overall championship standings.

Just off the podium was the American rider Jacobsen, never a contender for the win this evening; behind the Ten Kate rider was the Swiss, Krummenacher who, with this fifth place, loses the second position in the final championship overall standings. Badovini rode his CBR to sixth place, Malaysian rider, Khairuddin finished seventh ahead of the Swede, Bergman, Roccoli took ninth place and Baldolini finished tenth.

It was a pity for pole man, Luke Stapleford: off the line badly when the lights went out, the Brit wound up in the gravel after contact with Spaniard, Pinsach. To win races, besides speed, it also takes a pinch of good luck. 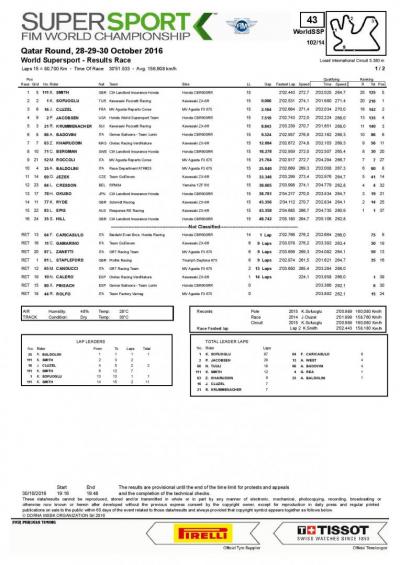