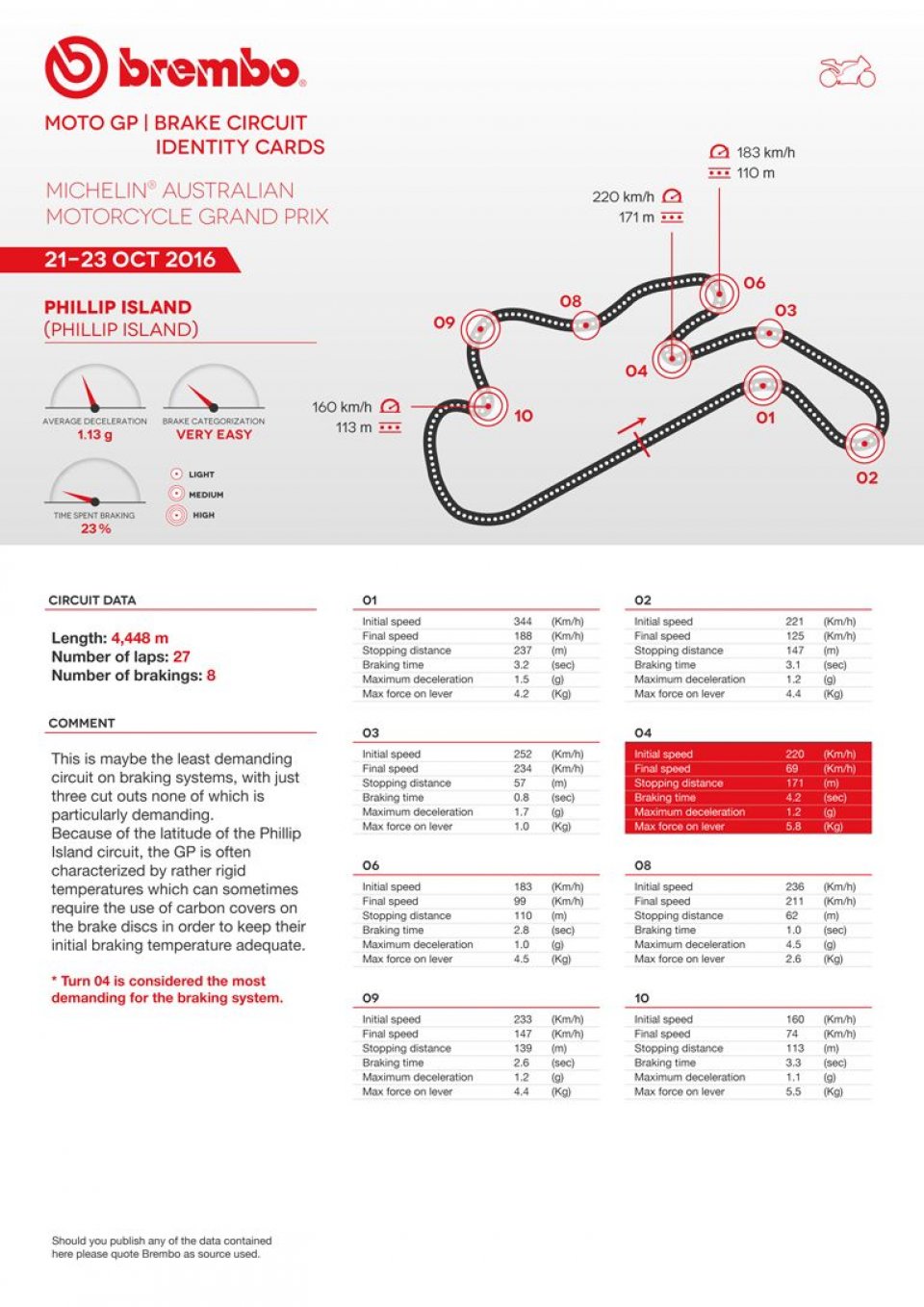 The Phillip Island Circuit will host the 16th round of the 2016 MotoGP World Championship from 21 to 23 October. Inaugurated December 1956, the circuit first hosted the World Championship for the 500 cc in 1989, thanks to the push by promoter Bob Barnard. Located on Phillip Island, some 140 km from Melbourne, it is the circuit closest to the South Pole: the track is at 38 South – 11 farther south than the Termas de Rio Hondo circuit in Argentina.

The circuit’s latitude makes for fairly harsh temperatures and brake discs sometimes require carbon covers to maintain a suitable starting temperature when braking. Air temperature remained below 15 during the race last year; in 2014 air temperature was 16 and the temperature of the tarmac was only 29.

According to Brembo experts, who deal with all MotoGP riders (Brembo supplies 100% of riders in the premium class), the Phillip Island Circuit is absolutely the least demanding for the brakes. It earned a 1 on a scale of 1 to 5; the slightly more demanding Assen racetrack earned a 2.

Brake use during the GP - The 4,448 metre track includes 12 turns, half of which are located in the section closest to the frigid waters of the Pacific Ocean. Even though the brakes are used 8 times in each lap, for a total 21 seconds per lap (it takes a little less than 10 minutes to run a lap), the cold temperatures mean there’s no risk of overheating the brakes.

Average deceleration is also limited: only 1.12 g. The sum of all the forces the pilot exerts on the brake lever, some 900 kg, is equivalent to the weight of 550 bottles of Australian wine.

Turn 4 (Honda Corner) in first gear is the most demanding for the brake system (the pressure gets up to 10.1 bar) and for the rider, who has to put 5.8 kg on the brake lever: MotoGP bikes get to the corner at 220 km/h and drop two thirds of their speed after braking for 171 metres, the length of two dozen Australian salt water crocodiles. Braking lasts 4.2 seconds, but deceleration only gets to 1.2 g.

Turn 1 is 237 metres long and offers the most room for braking, despite bikes coming in at 188 km/h; the riders get up to 344 km/h over the 900 metre straight before the corner. Deceleration gets up to 1.5 g, but braking lasts a mere 3.2 seconds and the load on the brake lever only gets up to 4.2 kg.

Turn 3, named after Casey Stoner, only requires limited use of the brakes: barely 0.8 seconds with a 1 kg load on the brake lever while the bike covers 57 metres, half the width of an Australian football pitch.

Brembo Victories - Bikes with Brembo brakes have won a full 24 of past 27 editions of the Australian GP in the premium class. The first Italian bike to win in Australia was the Caviga, with John Kocinski in 1994, but races were held at Eastern Creek at the time. Ducati’s 4 victories on Phillip Island were all earned by Casey Stoner. The record for victories on the track is shared by Casey Stoner and Valentino Rossi, who have each won 6 times on this track. Jorge Lorenzo and Marc Marquez have earned one victory each on the track, while Dani Pedrosa has never won.