The Japanese Moto2 race was characterised by the many crashes suffered by some of the title contenders with those who were able to stay upright scoring fundamental championship points.

Thomas Luthi won his third race of the season and did so with apparent ease. Having made a great start, the Swiss rider with team Garage Plus Interwetten set a pace that no-one could match and, despite Zarco's timid reaction in the final laps, #12 was able to cross the line undisturbed.

Johann Zarco, championship leader, had to settle for second place but considering the crashes suffered by Alex Rins and Sam Lowes, this podium is almost like a win for the Frenchman. His advantage over the Catalan team Pons rider is now 21 points, not a lot but enough, and he will be careful to manage them in the final races.

The podium was rounded out by a strong Franco Morbidelli who got the best of local rider Takaaki Nakagami on the very last lap, adding this result to the four podiums he's achieved in recent races.

Closing behind Sandro Cortese, in fifth, were Italians Simone Corsi and Mattia Pasini, both of whom completed a good race. Julian Simon, Marcel Schrotter and Xavier Simeon made up the central group, rounding out the top ten. 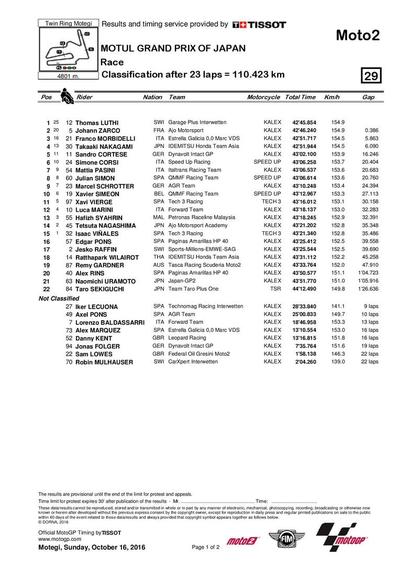