A difficult weekend, up until now, for the Althea BMW team at Magny-Cours with its two riders Jordi Torres and Markus Reiterberger completing a disappointing race, heavily conditioned by the uncertain weather.

Right from Superpole 1 and 2, the slippery track caused problems for both the Spaniard and the German, who qualified in twelfth and nineteenth position respectively.

In the race things became more difficult. The sun began to dry the track but the two Althea men started the race on rain tyres, meaning they had to come in one third of the way through the race to change them, after which the gap from the front was just too great.

Jordi Torres didn't make a bad start, making up a couple of positions before coming into the pits: “We had a tough race today. During the wet Superpole we were able to understand certain aspects that proved useful for the race, seeing as that also started on a wet track. During the sighting lap we could see the track was probably going to dry out, but we decided to go out on rain tyres anyway, thinking it would be too risky to use intermediates. We did our best, and then came in to change tyres when the track had dried a little. It was just a shame that a technical problem made it difficult for me to ride. Anyway, tomorrow we hope for dry conditions so that we can make a better race.”

Things went no better for German Reiterberger, out of the points zone in 17th position:“Today was again difficult. We took a small step in FP3 but we weren’t able to go as fast as the others in the wet and only qualified 20th. I made a good start to the race and made up quite a few positions, but when the track started to dry out I had to come in and change the tyres, after which I totally lost the good feeling I’d had at the start. I’m not pleased with this and will try to work harder to find a solution that allows me to be faster.” 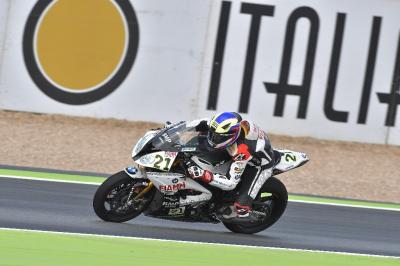 It was decided by the Board of Directors via video conference call. Previously the FIM-Dorna contract provided for a minimum of 13 Grand Prix. In F.1...
1 day 2 hours ago

An embarrassing moment for Audi Formula E driver Daniel Abt who, during the virtual race in Berlin, had an eSports professional race in his place:...
1 day 20 hours ago

Rainey: "With the way things are in California right now, there is no way we can race with spectators at Laguna Seca in July ". The series is set to...
4 days 5 hours ago

The round scheduled for the Circuito do Estoril from the 4th-5th July would go ahead as planned and become the season opener, to be followed by the...
1 week 9 hours ago