A great day for team Gresini today at Aragón: after Bastianini’s pole position in Moto3, after Stefan Bradl’s great qualifiers in MotoGP, the first place time arrived for Sam Lowes in Moto2 as well.

And yet, despite his time of 1’53”207, the English rider was not fully satisfied with the way his Honda CBR600 powered Kalex performed and that could mean that Sam feels like he can do even more in the race tomorrow, possibly riding more smoothly and maintaining a fast and consistent pace with his usual criss-cross and drifting style.

Second best time went to Alex Marquez just 54 thousandths behind Lowes, a tight gap, but we should also mention that on his best lap, Marc’s brother went off track in the downhill ‘S’ on the Spanish track. Rounding out the front row, with the third best time, is Japanese rider, Nakagami, just three tenths behind Lowes.

The second row went to German Jonas Folger, Johann Zarco and Baldassarri, who also crashed without any serious consequences. Their gap behind Lowes ranges from three tenths to a bit more than half a second.

Franco Morbidelli took seventh time at 1’53”844, just ahead of Thom Luthi and Axel Pons. Tenth and eleventh went respectively to Mattia Pasini and Simone Corsi… for the Italtrans rider from Emilia Romagna the gap behind Lowes was 820 thousandths, whereas for the Roman team Speed Up rider, the gap was almost nine tenths.

Alex Rins did not do too well, finishing thirteenth, and Luca Marini did not do well at all in twenty-seventh, finishing between Frenchman Alan Techer and Brit Danny Kent with a time that places him almost two seconds behind Sam Lowes. 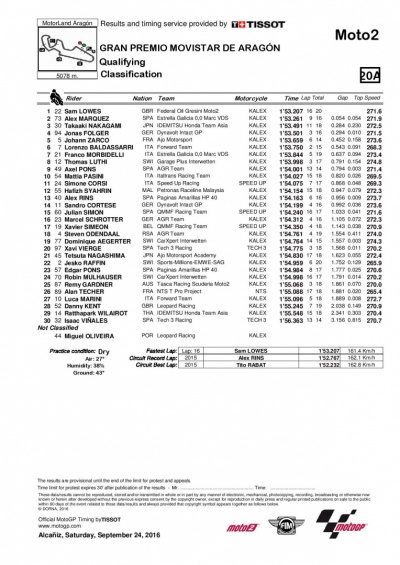 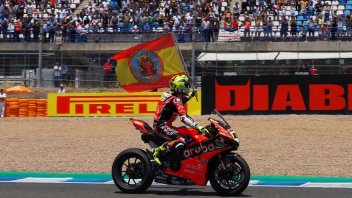