The list of rivals with whom Pierfrancesco Chili has battled and duelled on the track, not to mention arguments in pit lane, is hair raising, taking us back to a world of motorcycling which, in certain aspects, has lost its spontaneity, leaving us a format that, especially to purist fans, seems pre-packaged and “tailor” made.

A true character, Pierfrancesco. One of those who does not worry about being nice or not, one of those who said and says what he is really thinking, without filters, without masks, conveying his emotions with his spontaneous passion. It is not by chance that, although he never won a world title, he was and still is one of the most beloved riders, so much that he was inducted into the SBK "Hall of Fame" and on various occasions, Chili had the skill to win many races, beating those rivals that we had the pleasure of listing above.

Speaking with “Frankie”, which became his nom de guerre over the years, you know not to expect answers from a muzzled footballer, nor from a corrupt politician: “Currently I am not connected very much with the racing world. I tried to have my own team in the Italian championship but, after I saw the way things worked, I got a whiff of foul air and I preferred not to be a burden to anyone because, in any environment, I want to feel at ease, without having to pretend or anything like that. My son Kevin races, but I do other things. I have two seaside bathing establishments and I am involved in real estate.”

“Yes, I can confirm what you are saying. I noticed it especially at the end of my career. But even now they invite me to events and TV broadcasts. At the end of August I was on the Isle of Man where I opened up the TT Classic and I also rode Schwantz's Suzuki. I had a lot of fun and I felt at home... I have always been an outspoken and direct person. I do not like our political system that is dragging us down and I detest those who say something and then twist it around.”

“Yes, those were fantastic and fascinating years.”

“Yes, but that wasn't all that great. It is not a race that I remember fondly, not so much for the win as for the other riders striking. Just think, I had told them two months before the race at Misano. I had told them that if it rained, the track conditions would be critical and treacherous, but I was not taken into consideration since I wasn't part of the “group of Americans”. And then, wouldn't you know it, the Sunday morning of the Grand Prix it rained. They met in Mamola's truck and decided not to race. But I, like others, assumed my responsibilities and competed in the race, winning it. Sure, the best riders did not participate in the race and I was very disappointed about that, because later I proved that I could still win in the rain. Who knows. Maybe that day at Misano I would have beaten the Americans anyway.”

But Chili had his greatest rivalries in the other categories, beginning with 250 where, more than rivals, Pierfrancesco had true enemies: “In 1992 I rode an Aprilia and I shared a garage with Max Biaggi… I remember that in the Italian race at Mugello I spoke with Max, telling him to be careful, especially in the final laps, because it was important for us to bring home a good result. Well, despite what I said, at the end of the last lap, Max went long at San Donato and, when he brought it back in line to take on the first “S”, he hit me, knocking out my front end and making me crash. When I got back to the garage I expected his apology, but instead I got nothing. Biaggi simply asked the guys on the team where I had ended up. I was extremely pissed off.”

In fact, Chili and Biaggi never communicated much, except through clashing fairings. His relationship with Luca Cadalora was different, and Pierfrancesco remembers it like this: “I was always fast at Assen. The design of the Dutch track enhanced my riding characteristics (high speed through the corners and accurate trajectories), so in 1991 in the 250 class I beat Zeelemberg and Cadalora right in the last lap, winning the race. Luca still admits it: on certain tracks I was hard to beat. In fact, it was better just to leave me alone.”

“Many people have talked about it and still do. That season I was competing for the SBK title. I was riding a factory Ducati 996 and my rivals were Fogarty, Corser and Slight. In the Dutch race, the duel with Foggy was ferocious and, I'll admit it, I made a mistake. In the last lap Carl had an aggressive attitude, it's true, but if I had been less tense and more lucid, I would not have made a mistake braking and I would not have ended up in the sand. He won and all I took home was gravel and a lot of anger.” 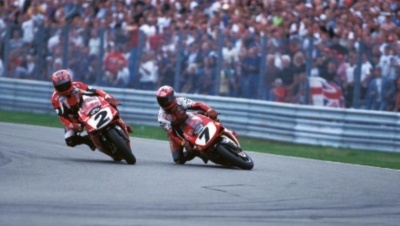 Well, there is an episode missing from this story...

“Well yes, after the race I went to Foggy and, let's just say I smacked him... it just slipped out. It was a spontaneous reaction and, you know, the world championship was on the line, there was the adrenaline from the race... Certain episodes in the heat of the moment can happen. A lot was said about that episode, but I can say that Carl and I patched things up and when I go to England, he hosts me at his house and I return the gesture when he comes here to Italy. All because we spoke to one another directly, without intermediaries or a spokesperson.”

In short, you hate political manoeuvring?!

You, along with the others, had fun on the track and entertained the fans. Do you think the riders today still have fun?

“Hmmmm, yes and no. Sometimes it doesn't seem to me that they are having fun. For example, the last MotoGP races last season disgusted me. This year, after the sad event at Barcelona where a young man lost his life, two of the Grand Prix Motorcycle Racing protagonists (Rossi and Marquez) shook hands as a sign of peace. But I have to say, did it take that kind of accident to get them to reconcile? The way I am, and the way racing was in my day, I would have preferred for the two of them, in other situations, to have come together. In my day, slaps and a handshake were completely spontaneous.”

Okay, so times have changed and you don't like them. What is the cause?

“There is a lot of money in modern professional racing and money has the kind of power that prevails over everything else. Today the business aspect is so strong that it annihilates the moral and sporting values that should be at the heart of racing. Whoever puts up the money wants to have a say and all of that creates a big mess.”

On the track, however, there is no lack of overtaking.

“Yes, especially in Moto3 and Moto2, the show is entertaining. In MotoGP we have seen 8 different winners up to the last race and that is a great thing for our sport.”

But in MotoGP there is a lot of controversy after every type of manoeuvre.

“That happens because people are reaping what they have sown: Valentino Rossi was the first to toy with his adversaries psychologically, making gestures, saying phrases and playing jokes that infuriated his rivals and destabilized them. It is not easy to get Valentino riled up, but he was the one who created everything that is coming back to him now. And then we need to be careful. Motorcycle racing fans are becoming like football ultras and that is not a good thing.”

In short, Pierfrancesco Chili, the man who saw everything in black and white, without strategies or any sort of tactics, the man who, when he raced in SBK, said: “If my name were Chilinski and I came from overseas instead of from Castenaso, I would have a factory Ducati 916 and not a privateer bike”, is still one of the most hot-blooded and genuine characters in motorcycling and the SBK audience would probably benefit from him immediately.

Dorna signed from 2022 to 2026. The Ricardo Tormo circuit will alternate with the others on the Iberian peninsula but will remain the last race of...
6 days 18 hours ago