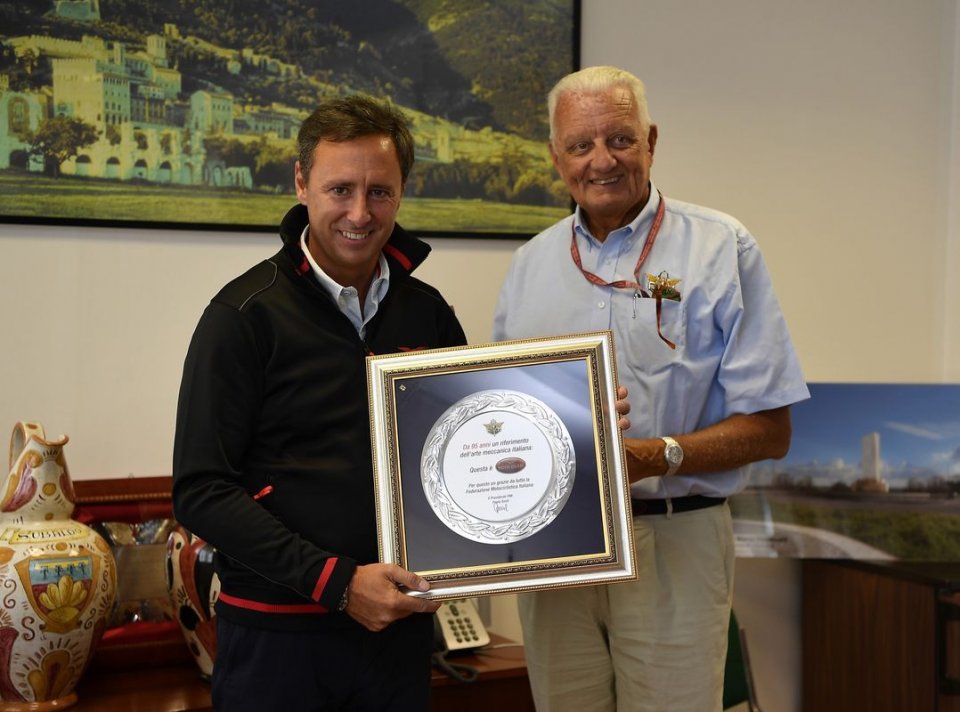 This is an important weekend for Moto Guzzi, which is celebrating its 95th anniversary, having been founded on 15 March 1921.

And while a three-day event for 20,000 Guzzi enthusiasts is underway in Mandello del Lario, home to Guzzi, at Misano the FMI, represented by president Paolo Sesti himself, has chosen to pay homage to the manufacturer with a celebrative plate.

On site to receive this award is Davide Zanolini, marketing and communication director for the Piaggio group.

“I thank the FIM very much for this award, and am pleased that the ceremony is taking place at Misano and not at Mandello. This is because – explains Zanolini – Misano is a temple to bikes and so is in keeping with the Guzzi spirit, while it would have perhaps been rather commonplace if held at our base. Moto Guzzi was the first manufacturer to consider creating and using the wind tunnel, and this tells you something about the prestige of this brand that, right now, is experiencing a second youth. In the next five years leading up to our centenary, we have many important projects planned, with one eye on the younger audience that is returning to our brand”.

So a manufacturer that needs no introduction and that boasts 15 world titles (7 riders' and 8 manufacturers' titles). Moto Guzzi has not competed in racing since 1957, but this lengthy absence might soon come to an end.

“As we celebrate 95 years, we are also beginning a five-year period that will lead up to the centenary of this glorious brand. We will have some extraordinary new products that will extend a range that is already giving us great satisfaction, while also attracting a new, young generation of fans to the Moto Guzzi brand and to motorcycling- said Zanolini -  But Moto Guzzi also boasts an extremely significant racing history, an extraordinary legacy that is pushing us to consider a return to racing. Aprilia Racing is at the pinnacle of technological research within the Piaggio Group and there is nothing preventing us from transferring, as already occurs with the production bikes, this technology also to the Moto Guzzi brand with a view to racing. It might not happen right now, but we definitely don't want to exclude this exciting possibility”.

Are we dreaming or actually awake? Guzzi back on the track, perhaps in the Endurance championship?

“As I've said, a return to racing is always possible, never say never. Where would we return? Of course it's difficult to go straight into MotoGP; at the moment all doors are open, even the world of reliability trials. We need to remember that Moto Guzzi is already involved in racing to a certain extent in the sense that it is absorbed in Aprilia Racing”.

Speaking of winning brands that are currently not involved in racing, our thoughts also turn to Gilera, which won its last title with Marco Simoncelli in 250 in 2008.

“Gilera's return is closely linked to the budget of the Piaggio group. Right now the priority is to relaunch the Aprilia and Moto Guzzi lines; once that is done, everybody, from president Colaninno down, hopes to be able make Gilera great once more”.

Stoner: "I’ve missed Valentino at the front, the racing could have been...