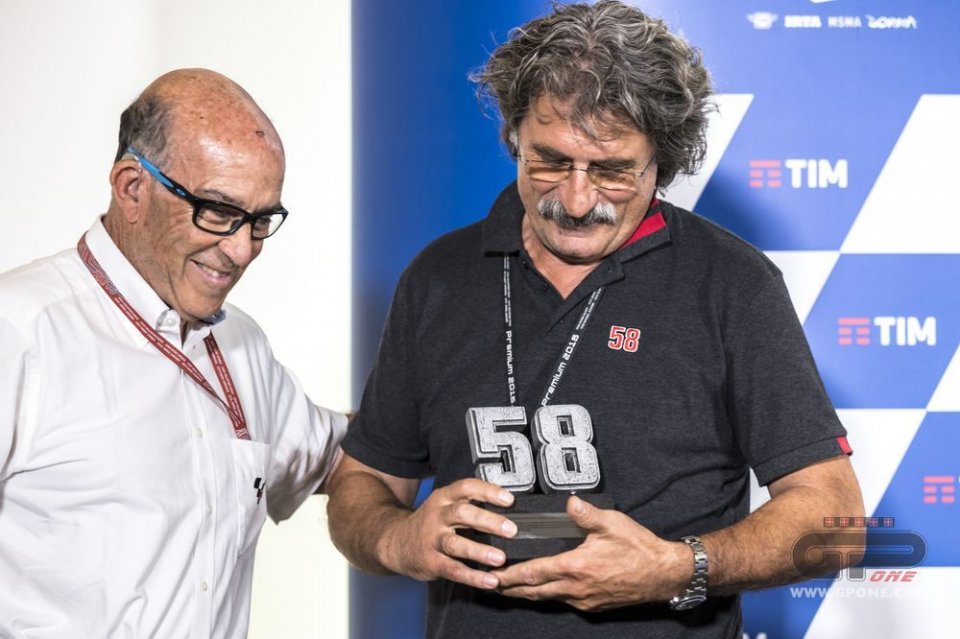 No rider will be able to use the number 58 in MotoGP. Dorna has decided to retire what is the symbol of Marco Simoncelli and it has been entrusted to his family who, if they so desire in the future, will be able to assign it to another rider. His dad Paolo received a plaque from Carmelo Ezpeleta at Misano.

All the riders at the press conference applauded the news and Valentino Rossi particularly stated that he was happy about the news.

“What Paolo and Sic’s entire family have done over the years is something special and I have tried to give them my help - he said - Paolo often spoke to me about this idea for the hospital and I am happy that construction begins on it today. To be honest, I thought that the number 58 had already been retired, but it is nice that it was done here at Misano, at the circuit that bears Marco’s name.”

At 6:30 pm, in Coriano, the first stone was laid for the centre for the disabled named for Sic. The former Casa Santa Marta will soon provide continuing and stable hospitality for the guys from Montetauro who will be joined daily by others, thanks to the agreement with Cooperativa Arcobaleno of Rimini. It will take three years to finish the work and make the equipped structure usable that, designed by Polistudio A.E.S. of Riccione, will include a pool, creative areas and a large green area for the guests. The required financial commitment for the project is €2.2 million, a goal that was achieved thanks to a long list of initiatives in support of the Simoncelli Foundation in recent years.