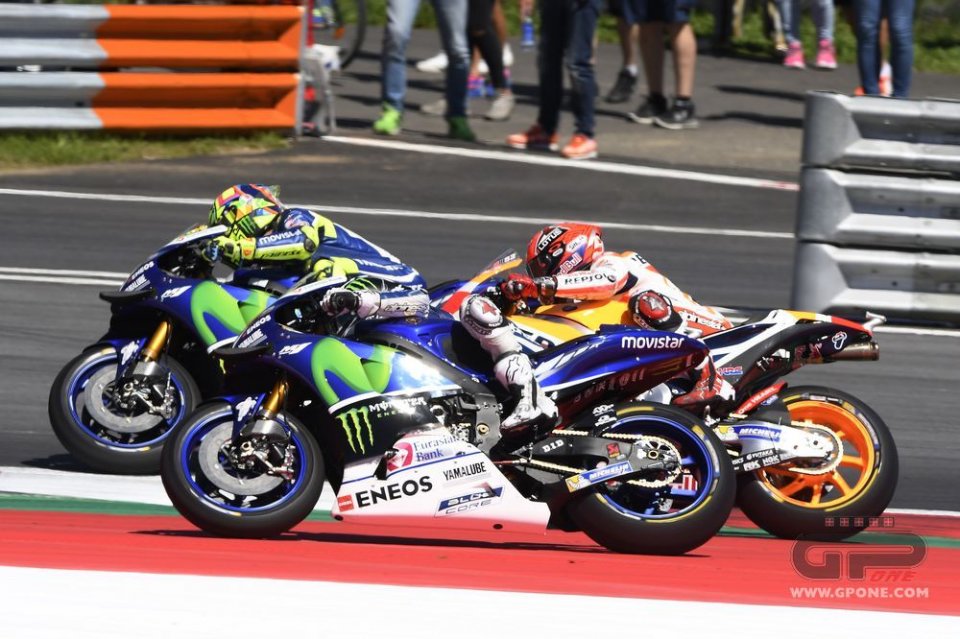 Perhaps it won't rain at Silverstone, and the forecast will prove correct. This week, it's become the norm to check the sky before taking a look at the track, as the weather is playing an important role in the championship and in the UK it's best to prepare yourself for... the worst.

As was the case last year, when Italy celebrated with Rossi, Petrucci and Dovizioso on the podium. Twelve months have passed since that triumph and the championship situation is very different. Valentino and Lorenzo are still head to head, but this time they're fighting for second place.

There have been many thrills and spills, but one constant: Marc Marquez. While his rivals have made mistakes, been plagued by bad luck, or suffered due to the weather, the Spaniard has stayed on course and now has a 53-point lead over Rossi (who is 6 ahead of Lorenzo), with 7 races to go, a significant advantage.

Credit where credit is due though, because Marc's Honda, as he himself admits, "isn't perfect", but this year the key has been to use one's head, with Marquez clearly proving to be a rider who reasons when the situation requires.

And in recent races this has been necessary, because Crutchlow was the sixth different winner in as many races. From Mugello onwards, Marquez has been on the podium five times, winning one race. Over the same period of time, both Rossi and Lorenzo have won one race each, but only one podium. Valentino has also suffered two 'zeros', as has Jorge, as well as a lowly 15th and 10th place finish.

So has Marquez already won? Mathematically-speaking, no, but, as Rossi pointed out: “after Misano we'll see if we are still able to keep up with the train”. A train that's travelling flat out...

It's useless to make calculations in the hope they might help. It's true that the Ducatis are strong and could take points from Marquez, but they can also do the same to the Yamaha pair. Not to mention all of the outsiders who are ready to snatch at any opportunity they might get.

Rossi and Lorenzo would do best to leave the calculator at home and try to do just one thing, or rather two: win, and hope. Hope that something unexpected slows Marquez down, though at Silverstone the Spaniard is very strong, like Jorge in particular. For Valentino, the English track has always been something of a bête noire, until last year when he won, albeit in the rain.

Statistics count for little, the #93 train continues to travel steadily along the lines, he needs to be stopped and time is running out.