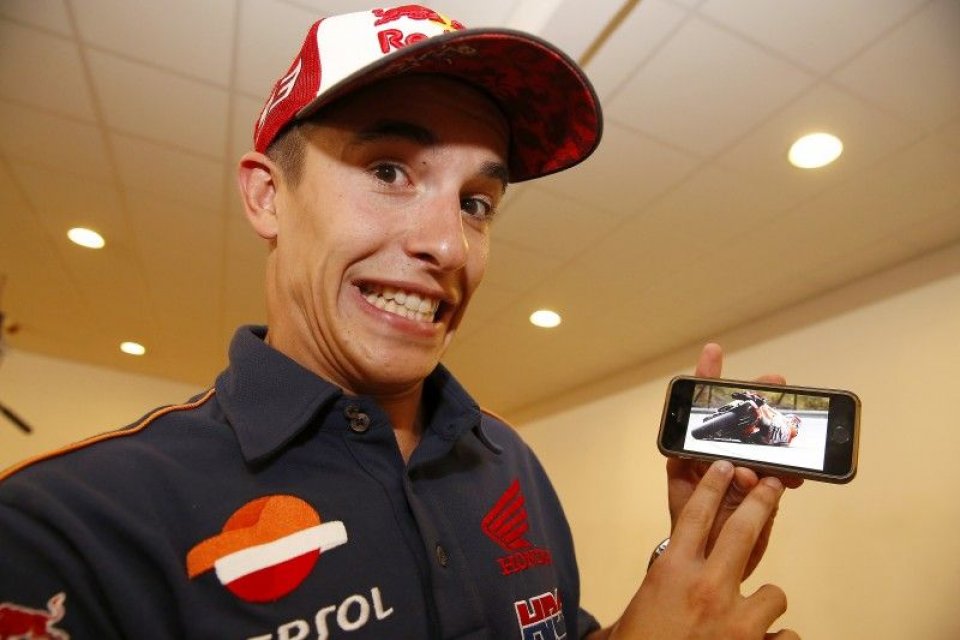 Riding on the limit is undoubtedly his most distinctive trait. Over the years, Marc Marquez has thrilled us with manoeuvres that leave the fans open-mouthed. It had already happened in 2014, right here at Brno, and now it's happened two years later, in FP2 at turn 13.

The Spaniard lost the front of his Honda, but he had no intention of letting it go, executing an incredible move to get back in the seat. Hats off to him. Marc's masterful manoeuvre stole the show in the second session, so much so that it overshadowed his fastest time, which put him ahead of Ducati and Yamaha. 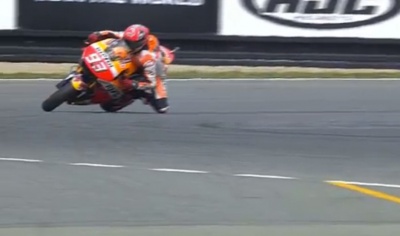 “It was 2014 if I'm not mistaken, but that time my lean angle was about 68 degrees, while this time it was 67-67.5. I lost the front and had to do what I did to hold it. When I got back to the box I was pretty revved up. This means I was on the limit. We have to work to do more, trying to push to the limit to take a step forward. Brno isn't one of the best tracks, but we have to try”.

Did you think you'd end up on the ground?

“When I lost the front, I thought I'd hit the ground, but tried to hold the bike, seeing as I never let it go. I was quite lucky, because the front was practically in contact with the asphalt. I don't want to repeat that during the race”.

What are you still missing after day one?

“In Austria I was tenth on Friday. Today I'm first but it's not my true position. We have to improve with the used tyres to have quicker pace, seeing as Iannone and Vinales are also competitive. We're losing in acceleration, so must take a step forward in certain sections, particularly in braking.”

“I think it only became clear in the afternoon. I have to ask the safety commission for more information so that I can understand where to take the turn”.

A disappointing day at Honda for Daniel Pedrosa, further back in both of the day's sessions. The Spaniard closed tenth in FP2, behind Vinales.

“This morning I worked on the chassis, in the afternoon I focused on another. Tomorrow we'll try to decide which of the two is best. It's not the result I wanted but we're not so far from those ahead of me”.

What do you need for tomorrow?

“We need to work on setting, seeing as there are two possibilities, trying to improve. The last lap was my fastest and we need to start from there”.

How are you finding the tyres brought by Michelin?

“My sensations are positive, with the other tyres the situation was more critical, particularly in the centre. Now it's different”.

You didn't consider using the wings?

“I don't like them, I only used them in Austria”.

What changes from one week ago?

“I think that things are better here at Brno compared to Austria, but we need to work to be closer to the fastest guys”.

The FS-3 Racing Kawasaki team continues to focus on young riders in the British Superbike. With Rory Skinner in the Moto2 World Championship, 19-year...
9 hours 21 min ago

His wife posted about his condition: “He is okay and in the best place possible. They will keep him in for a few days to monitor him.”
18 hours 32 min ago

Peter Oettl merges with Intact GP. The Swedish brand Husqvarna will race in Moto2 with Darryn Binder and Lukas Tulovic and in Moto3 with Ayumu Sasaki...
1 day 22 hours ago