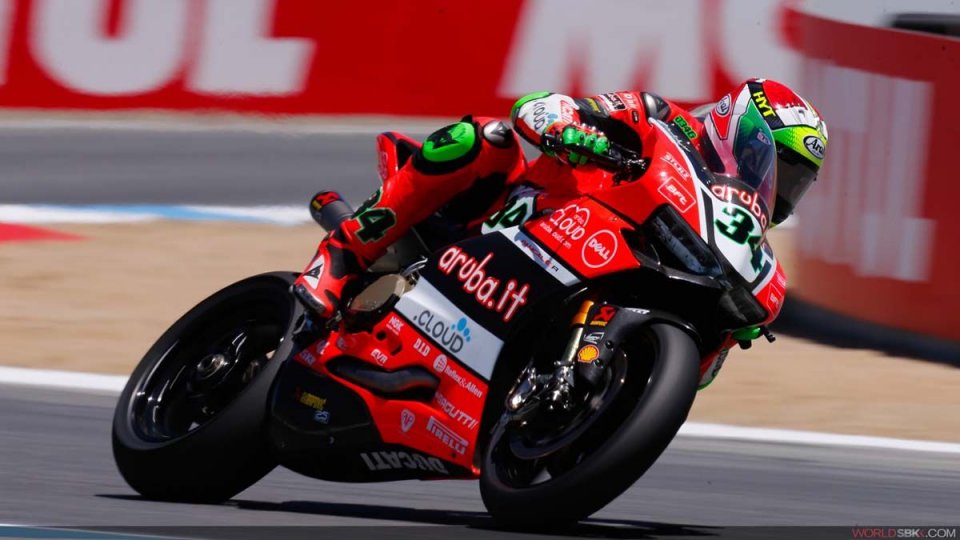 No official announcement has been made as yet, but Davide Giugliano does not feature in Ducati's plans for 2017.
And it is strange that this comes in the season that - despite no actual race win - is proving to be the Italian's best so far in Superbike.

Giugliano is currently fourth in the standings, 75 points behind his team-mate Chaz Davies. Not such an enormous gap in a championship that offers 50 points per round.

Five podiums - two second places and three thirds - are clearly not deemed to be sufficient.
But is this the real reason or is it, as rumours suggest, that Ducati is looking for a big name, someone who can help to heighten interest in the series?

Ciabatti, at the Sachsenring, confessed that there is pressure from sponsor Aruba to have another Italian, which could only mean Marco Melandri.
Davide Giugliano doesn't want to get involved in the discussion.

"It's not up to me to decide who will ride the Ducati next season - he admits - I wanted to stay with them of course, but if that's not possible then... so be it! I'll move forward. I've grown in Ducati, I have many friends and I went to a lot of trouble, together with Chaz, to develop the Panigale".

"Well let's say I didn't take it too well! The market started moving between Aragon and Assen, right when I was having my most difficult time, but then I recovered and since Malaysia I've scored more points than Davies. The reality is that in 2015 I practically didn't ride, due to two bad accidents... many would not have returned to racing... This year I started out with a brand new team, which basically meant starting over from scratch".

Some would blame Davide for not having scored a win, but this does not upset the former Superstock 1000 champ.

"The Superbike is a very competitive championship. It's not easy to win. Nicky Hayden has come here, a former MotoGP champion and has scored three podiums in total, with one win, in Malaysia".

It is precisely this competition, and new arrivals - Honda is talking to Stefan Bradl with a view to replacing Van Der Mark - that makes looking for a new ride so problematic.

"I don't like to talk until I've got something concrete. I'm speaking with some top teams in Superbike, but I also wouldn't mind moving to Moto2, a championship that I think is very interesting. It wouldn't be easy of course. A change of category never is, and the Superbike paddock is my home, but I hope to have more to say within a couple of weeks".

The difficulty, in addition to the championship's incredibly long summer break, comes down to an apparent time of crisis for SBK.

"I would like it if Superbike was viewed in a different way - explains Giugliano - People shouldn't say that MotoGP riders come to SBK when they're at the end of their careers, but should instead say that those riders are coming because they won't settle for finishing 15th or less due to a less than competitive bike. That's the great thing about SBK: if you have a strong team and a good bike you can aim for the podium. It's a healthy championship. In MotoGP,  if you're not on one of the three or four factory bikes, you have no chance of winning, or even reaching the front".