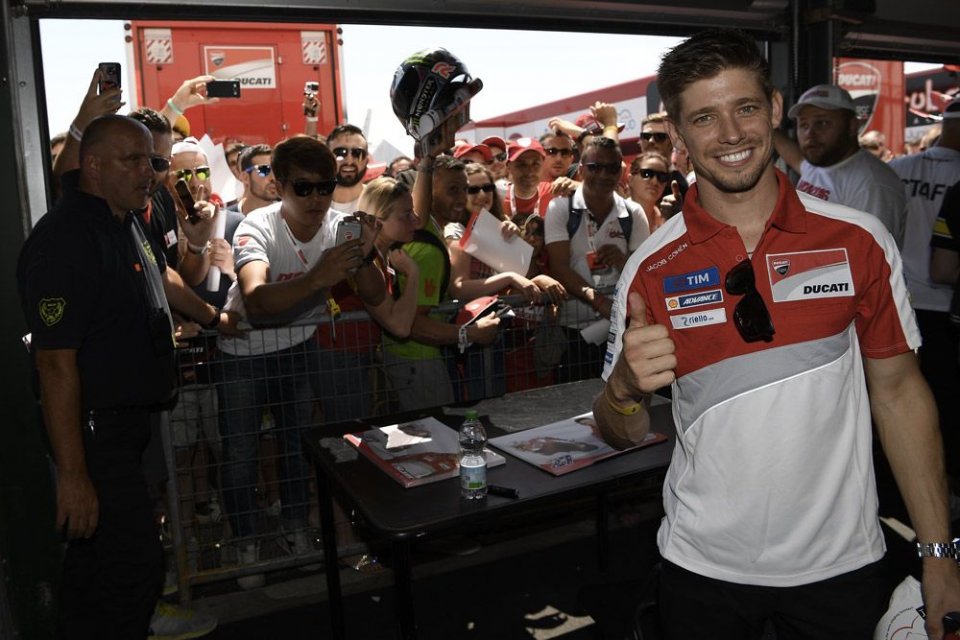 The question is quick to arrive and Stoner reacts with a smile: will you wild card? “It's not in my plans right now, we only have the test in Austria scheduled for August. After that, we'll discuss the future and further tests”.

So Casey hasn't excluded the possibility that we'll see him race, but this doesn't mean it will happen. The years spent away from the racetrack have had an effect and to deal with a full GP one needs to be not just quick but also physically prepared.

Dall’Igna doesn't give anything away either: “we've talked on many occasions. Wildcarding isn't our aim with Casey, if anything his role is to help us to win a world championship. Stoner can help us both in terms of development and in terms of our riders. A wild card I'll leave to fate”.

And so it's best to talk to Casey about the tests.

“It was really hot but we've made the steps forward that we wanted to make. For example, the Ducati has struggled recently when there's little grip on track and we've improved in that respect”.

What is the Desmosedici still missing?
“All the bikes have weak points, I think that the results haven't reflected our potential until now. Just consider how Iannone at Mugello made the fastest lap of the race on the last lap”.

Where does it need improvement?
“It works well in braking and has a fantastic engine, it doesn't run badly. In reality, there were limitations through part of the turn but we've managed to improve that during these tests. We just need to put all of the pieces together and then we'll be able to achieve the results that we want. I'm not just talking about improving championship positions, but also the riders' sensations”.

So the overall position is positive…
“We're not far off, the bike goes well, at least in terms of the pace I'm able to keep up right now (he laughs). Aside from that, you'll need to ask the factory riders”.

What do you think about the Michelins?
“I raced with Michelins during my first year in MotoGP and it didn't go too well (he laughs). It's a case of getting used to them, because Bridgestone had a great front tyre but struggled with the rear, while with Michelin it's the opposite. In recent months though, I've been surprised by their progress, but you can't ride betting everything on the front tyre”.

Many ask whether Lorenzo's style will suit the Ducati…
“I don't think a bike necessarily suits only one style. Look at Valentino and Lorenzo, they are fast but ride differently, as do our two Andreas. I know what Jorge wants in a bike, perhaps he'll need to find the right set-up or perhaps he'll get on the Ducati and be immediately comfortable. Right now we can only speculate”.

Who will win the championship?
“That's a good question (he laughs)”.

Forcada: "The fastest of all? Without a doubt, Casey Stoner"