Sam Lowes tested the Aprilia RS-GP for the first time in view of his début in MotoGP for the 2017 season. He got the chance at Misano, during a two-day test conducted by the Aprilia test team on the Romagnolo circuit.

Sam came to grips with the RS-GP straight away on Wednesday morning. The very first outing lasted two laps, just long enough to have his first taste of a MotoGP bike's power, the carbon brakes, the electronics package that manages the V4 and naturally the Michelin tyres. Then the excursions got longer and, by the end of the day Sam had logged 60 laps.

On the second day he continued getting to know a bike that is very different from the Team Gresini Kalex he rides in the battle for the Moto2 title this season. At the end of the day, with 69 laps on the sheets for the second day, everyone was satisfied and it was farewell until the next tests. 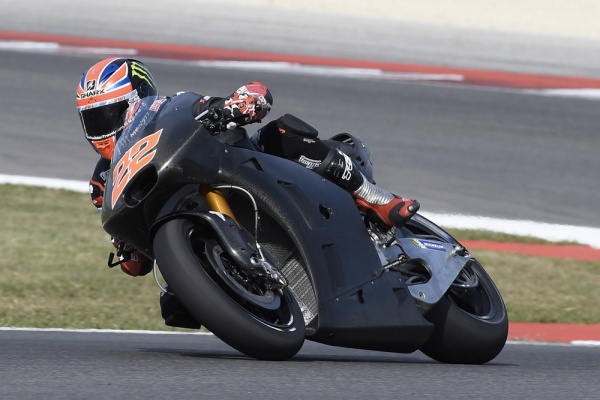 “My first laps on the Aprilia RS-GP were an experience that I'll never forget - Sam Lowes recounts - When I twisted the throttle the speed I could feel was incredible. It was a brilliant feeling. On the second run I had already begun to manage the power better and I tried to understand how to take the best advantage of it. There were a lot of new things to discover and they all astonished me. The first ones were definitely the power and speed, and then the carbon brakes. The third is the seamless gearbox which is really incredible and the fourth is obviously the electronics which I felt comfortable with straight away. And then the RS-GP surprised me with an agility that I hadn't expected, so much that the night before the test I was quite nervous because I was imagining a much harder bike to ride, but that's not at all the way it was, although nothing is easy on a MotoGP bike. Last, but not least, I want to emphasise how comfortable I felt working with the entire team. In short, it just went really well.”

Aprilia Racing Manager, Romano Albesiano, was also pleased: “It went well. I'd say that we could not have had a better start. Sam got on a bike that he had never seen before, having to deal with a series of new features that range from the available power to the carbon brakes. He was at ease straight away and he also proved to be very analytical and precise in the indications he gave the team, as well as with his work method. Naturally, we were not looking at times, but even from this point of view we are quite pleased with these two days. We continued the RS-GP development programme with Mike, focusing specifically on the new chassis parts and working on the electronics, especially in terms of torque output. Obviously we'll be taking every solution that proved to be effective to the races straight away.”

Defending champion wins ahead of Scholtz and Gagne. 5th and 7th, Wyman's and Jacobsen's two best Ducatis. Elias stopped by a problem.
4 days 15 min ago

The reigning champion started has started 2020 in the best possible way, heading his teammate Jake Gagne. Race 1 at 22:00 on Eurosport
4 days 22 hours ago

Despite the four-year deal for Marquez, Honda is moving on the Spanish market, so Borgo Panigale has blocked the 22-year-old Jorge Martin. A ‘leap in the dark’ as we have only seen one GP. Here is...