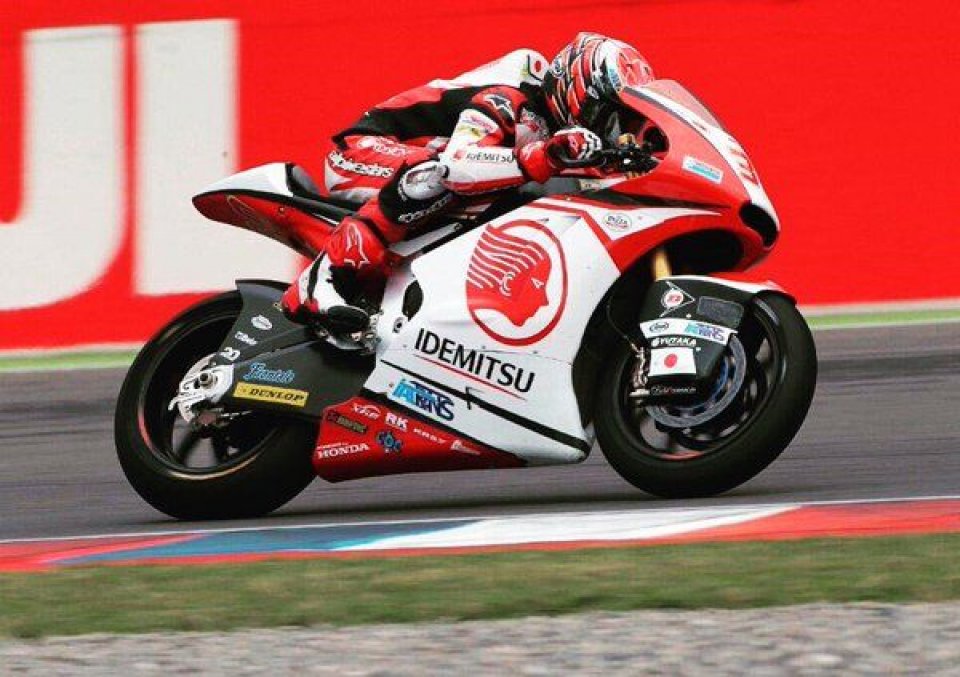 “I enjoyed the race at the beginning, battling with the other guys. After passing them and moving into the lead, I led without any problems and I rode relaxed, keeping a firm grip on the situation... I am very happy about my first victory and it was easy enough to win.”

Nakagami did it: after many Grand Prix Motorcycle Races, an astonishing 111, the Japanese from team Asia, promising talent from the land of the Rising Sun, managed to take a win that he has been chasing for some time and that, for one reason or another, had never arrived.

The Japanese rider won the Dutch Grand Prix overtaking his rivals at the beginning and, once he had the open track before him, he pulled the pin and opened up the gap ahead of his adversaries, managing to stay upright after the first drops of rain fell from the sky and taking the win after the red flag came out to halt the action.

Zarco finished second ahead of Franco Morbidelli, who is back on the podium after Indianapolis 2015, and now the Frenchman has moved into the championship lead, because Alex Rins has never been in the running with the protagonists and finished sixth. The two are now tied with 126 points each. Sam Lowes and Lorenzo Baldassarri arrived ahead of him, battling throughout the race.

THE RACE CHRONICLE - The group was off toward the first right-hander and Thomas Luthi was the first to dive in, taking compatriot Aegerter with him, who started well, Zarco is in third, overtaken straight away by Sam Lowes, aggressive and crosswise.

It is the second of the scheduled 24 laps and Lowes is already in second place, with the number 12 Swiss rider in his sights. Franco Morbidelli is locked in battle with Zarco and Cortese for fifth place. Japanese rider Nakagami is in fourth with the same pace as Luthi.

The third lap and Luthi is in the lead, Aegerter second and Lowes third in a compact group. Morbidelli overtakes Nakagami for fourth, Zarco is sixth ahead of Baldassarri who has managed to recover various positions. Lorenzo also overtakes the Frenchman whereas at the front Morbidelli moves into second place, after overtaking Aegerter. Baldassarri also overtakes again, with Lowes the victim this time, yielding a position to Lorenzo.

Twenty laps from the end, Morbidelli moves into the lead overtaking Luthi on the last chicane at Assen. The battle for the win is wide open, whereas Lowes appears to be struggling the most, falling back all the way to sixth place, but Zarco is also having trouble in seventh. Rins did not start well and limits the damage in ninth place.

Morbidelli continues to lead ahead of Japanese rider Nakagami, who tries to close the gap. Swiss rider, Luthi is in third ahead of Aegerter. Lowes and Zarco have gotten the better of Baldassarri, so the group tightens up again. On the seventh lap Baldassarri gets past Aegerter, dragging Zarco with him, with the two riders coming back on the leading trio.

Sixteen laps from the end and the Japanese rider attacks and overtakes Morbidelli. Franco is unable to resist and must also defend against Luthi, who tries to disrupt the Italian going into every turn. Zarco is fourth, but look out: at the last chicane Morbidelli moves into the lead but the Japanese rider is having none of it and takes it back straight away... Nakagami is not the only one who wants the win. In fact, Luthi and Zarco overtake Morbidelli, making this race as exciting as the Moto3 race.

Alex Rins is still struggling the most: the Catalan is in eighth place and suffers an attack by Simone Corsi, coming back after some difficult trials. Aegerter has lost positions, falling all the way back to ninth place, with Sandro Cortese on his pipes in tenth place.

In the lead with the open track ahead of him, Nakagami pulls the pin and attempts an escape which, 13 laps from the end, seems possible. The battle is now for second place where Luthi, Zarco and Morbidelli are exchanging blows, overtaking and elbowing. Baldassarri is fifth with Lowes close behind.

Eleven laps from the end and the Japanese rider is still in first. He sets the provisional fast lap and leads with authority, showing the excellent form demonstrated on Friday. The team Asia rider is dominating the race and he leaves the number two and three spots on the podium for Zarco, Morbidelli and Luthi to battle out.

In the background, Luca Marini is on turn 5, but Valentino Rossi's younger brother manages to get back into the race, although quite far back. Luthi is the one with problems, losing various positions and runs long, taking an off track excursion. The Swiss rider is struggling with tyre wear and his wide lines betray what is happening on his Dunlop shod Kalex.

Seven laps from the chequered flag and the race is no longer as exciting as the Moto3 race. Nakagami is still in the lead, riding toward victory undisturbed. Zarco and Morbidelli battle for second place. Baldassarri is fourth and Lowes is in fifth place. Rins is still struggling, unable to get his chin back up toward the podium positions.

There is no lack of mistakes. Lowes loses control of the rear, coming close to a crash and Thomas Luthi makes a mistake, going down softly on turn 8. Just after the Swiss rider's crash, the marshals wave the white flag with a red cross that indicates rainfall.

The pace drops and the positions blur. With four laps to go, Nakagami continues to lead, Zarco is second with a gap ahead of Morbidelli, in third, and out of the running for the victory.

Three laps from the end the white and red flag is still out. The riders begin to “row” vigorously and it is the Frenchman Zarco who refuses to give in… all in vain: red flag and race suspended, with the win going to the Japanese rider, Nakagami, his first and well-earned in Moto2. Second place for Zarco and Morbidelli third.

Second place for Zarco and a very nice third place for Morbidelli, who rode a great race. Sam Lowes finishes fourth ahead of Lorenzo Baldassarri and Alex Rins. 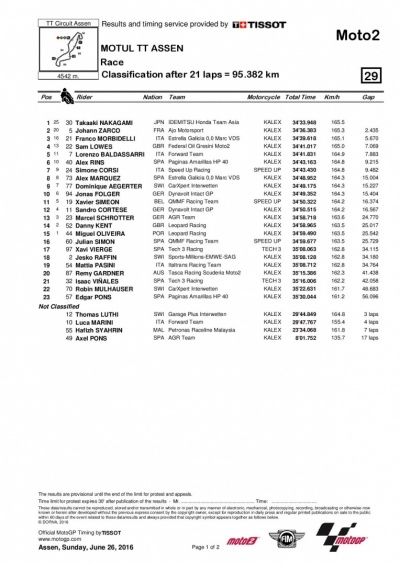