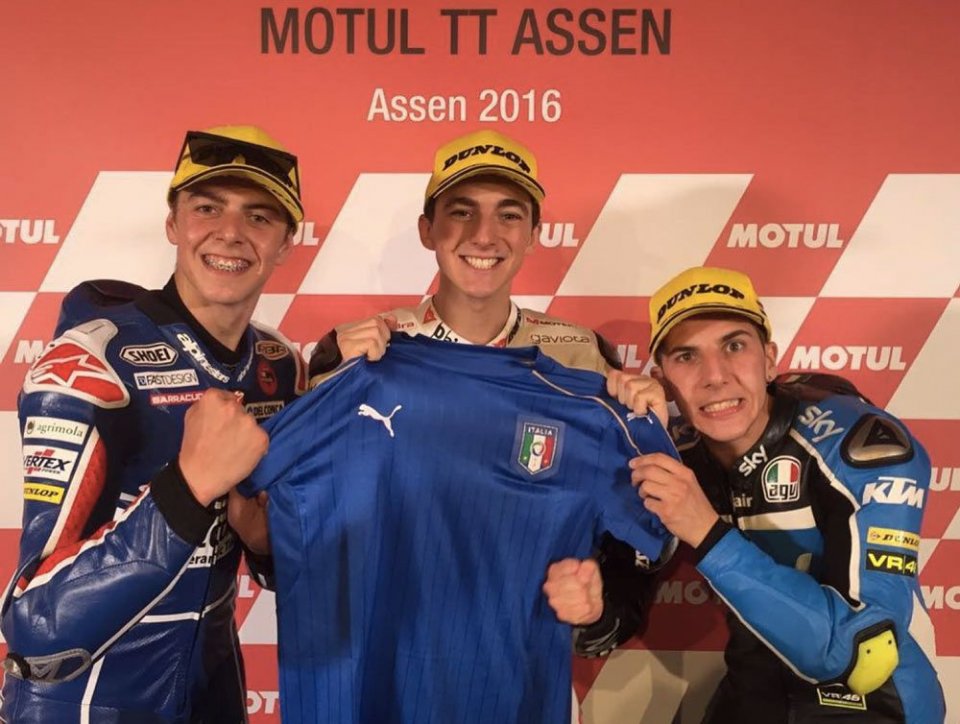 Bagnaia, Di Giannantonio and Migno embrace, clutching the Italian national football team jersey, then sing the national anthem. The Moto3 Italians dominated the Assen match. Not only did they monopolise the podium, but also the top 5 positions and, looking at the top 10, there were no less than 7.

It could not have gone any better. After struggling for years with the generational turnover, Italy has finally found a group of talented youth. A school, as we call it in these cases, that gave lessons on the Dutch asphalt.

BAGNAIA: IN THE FINAL TURNS I DID THE IMPOSSIBLE - Francesco Bagnaia is incredulous: it is his first win in the championship as well as the first for Mahindra.

“I knew I was fast, but I didn't know that I would finish first. In the final turns I tried to do the impossible and I succeeded - recounts Pecco - It was a very difficult race. As soon as you left a little space, somebody would dive in. In the last sector I had been losing ground the entire weekend, but in the race it went better.”

The masterpiece came in the last turn.

“Not even I could believe that I had finished first. I had to look at the monitor - he laughs - I won by just 18 thousandths and winning like that, in a sprint, is really cool. And then there are 7 Italians in the top 10. It's incredible.”

Not many would have bet on the Mahindra.

“We are doing a great job with the team. To go fast with this bike you have to give 110% all the time, but we have had the potential to do well for a few races now.”

Francesco celebrated his first podiums with a tattoo...

“Enough now, or I'll fill myself up! Maybe I'll think of something smaller”, he jokes. 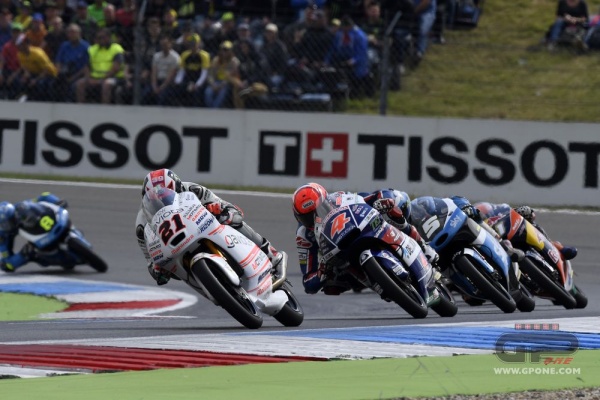 DIGGIA: THE MOST DIFFICULT RACE OF MY LIFE - It is Fabio Di Giannantonio's second time this season finishing in second place after his podium at Mugello. The Gresini rider is riding a great rookie championship season.

“I the last two laps not even I know where I passed - he recounts his race - At the beginning I pushed hard, but it was the most difficult race of my life. After making a few mistakes I was unable to recover. I would move up one position and lose five. Then I calmed down and managed to move forward.”

“In the last lap the light always goes out - he jokes - I thought about the win, a bit less when I got to the last turn and closer to the finish a bit more.”

His homework with crew chief Cecchini is working.

“At the beginning I had taken the championship lightly - he admits - Instead, I need to stay focused every day, from morning to evening. After Le Mans I decided to move close to Fabrizio. I'm in a house with some friends. It's important to have someone who helps you. I go to the gym and I ride motorcycles and I also have a new trainer.” 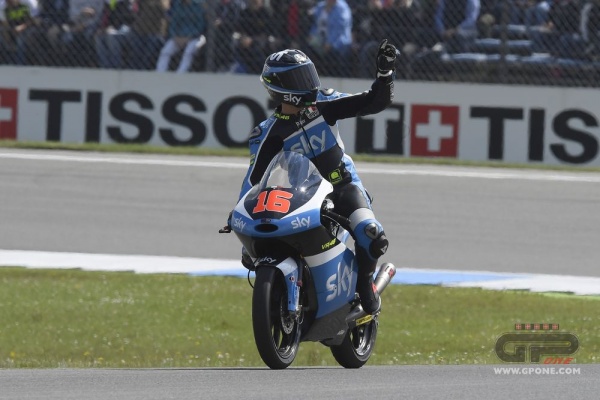 MIGNO: I COULD SEE VICTORY UP TO 5 METRES FROM THE FINISH LINE - Speaking of first times, this is Andrea Migno’s first time on the podium. The VR46 rider struggled to show his talent, but now the winds have changed.

“Up to 5 metres from the finish line I could see victory - he says - I took some risks but I am very happy. This week I felt fast and the team got a very fast bike ready for me. In recent months I never gave up; I never stopped believing. I dedicate this podium to the team, to VR46 and to my family.”

“I realised that I had gone over the green section, but I was in other riders’ slipstreams and I couldn’t do anything else, or I would have hit them - he explains - In the end it was fair. There are rules and they must be obeyed.”

For him the podium is a starting point.

“In the first three races of the year I had struggled, but from Jerez on things went better.This is a base that I can build the rest of the season on.”

LISTEN TO THE THREE RIDERS SING THE NATIONAL ANTHEM