A huge risk in the morning and a crash in qualifying. It was a rather eventful day for Marc Marquez at Assen, but in the end he managed to finish it with a good fourth time.

"In FP3 I ran a big risk - the Spanish rider recounts - the front wheel locked up in a braking section and my Honda went sideways. Fortunately I managed to stay in the saddle!"
The reason for the incident was clarified shortly thereafter by looking at the telemetry. 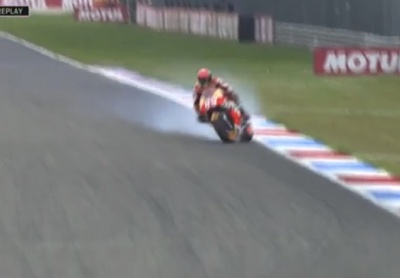 "We noticed that in acceleration the front wheel was practically brushing the tarmac, so with such little grip, when I squeezed the brake it locked up."

"In free practice this morning we were able to do a good job in dry conditions. We managed to maintain a good pace and try out several things with the bike. We went back to the previous setup and it worked well. Later we had to deal with Assen’s typical ‘surprise factor’—we all know that it can rain at any time here—although FP4 went well for me. I made a mistake in qualifying and crashed on the second lap. The marshals were a bit far away, and I saw a scooter with key in it and nobody around. When I took it, I saw that it belonged to Tino Martino, an Italian photographer, but he let me go. I wanted to get back to the pit as soon as possible, so honestly I would’ve taken it even if he said no! I risked more in those few hundred metres than on the track. Thanks to the great work done by the team, I was able to get back out on track for two laps and we managed to finish fourth. The important thing is that I feel comfortable in the dry, not superior to the others but at ease enough to fight. In case of rain it will be kind of a lottery, as always."

After a request from broadcasters, riders will have more time on the grid to allow for better coverage of all the teams.
9 hours 46 min ago

Dorna signed from 2022 to 2026. The Ricardo Tormo circuit will alternate with the others on the Iberian peninsula but will remain the last race of...
1 week 1 day ago

KTM's sports manager at the gates of 2020: "This is the highest point of engineering applied to motorcycling and has taught us to go beyond our...
1 week 3 days ago