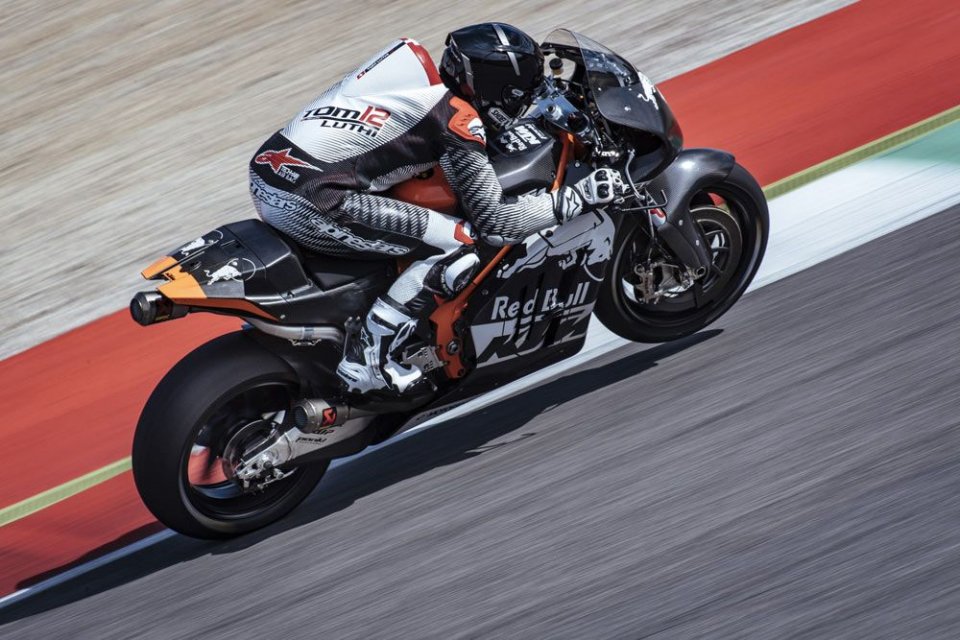 As already announced, KTM stopped off at Mugello for another two-day test. Riding the RC16 at the Tuscan track were both Mika Kallio and Tom Luthi, for the Swiss rider it was his first time riding the Austrian MotoGP bike. Good weather conditions allowed the Test Team to collect a great deal of data.

KTM will next take to the track in July at the Red Bull Ring where they will be able to make direct comparisons with their rivals.

“Over the past four weeks the team did again an excellent job and was at three different circuits in the same rhythm as in the Grand Prix -explains Mike Leitner. We were able to make good progress with the further development of the RC16 because of the different character of the circuits. This time, we had a different second test rider in Tom (Lüthi) and he was surprisingly good and quick to adjust to our MotoGP bike. Despite the intensive test work, Mika Kallio rode well and with stability and is doing a very good job. In Mugello we were on a high-speed circuit for the first time and another brand was also testing. We now have to apply what we have learned to the bike in the coming weeks."

Sebastian Risse, the technical director, adds: "Mugello is a very special circuit that tested the bike in completely different ways. Naturally we had an eye on things like the straight and the top speed, which have a big influence. Some of what we previously tried at other circuits worked, on the other hand, many things did not".

Mika Kallio comments: “It was good that we tested different setups on three very different circuits, especially here in Mugello we were able to gather more information about the chassis. This is very important for the factory engineers for the bike’s further development. The feeling was best for me in Jerez, but here we again needed a different setup. We know where we have to improve and the data and information we collect helps us to move onto the next step. The short breaks between the last three tests made it easier for me as a rider to find my rhythm. The next test will again have a new character and it’ll be cool to measure our progress compared to the others and to see where they are faster.”

Tom Luthi was also enthusiastic: “After I won the 125 World Championship title in 2005 I was able to do a few laps on a MotoGP bike on a half dry circuit, but this was for me the first real tests on such a bike. And despite the power, which you immediately feel, it was unbelievable how ride-able the KTM RC16 was from the first lap. Even though the long straights and the hills and corners of this circuit are probably not the easiest for a MotoGP rookie, I was quickly able to be in Mika's range and learn a lot. My clear priority still lies with Moto2 but after these two days I’ll be less nervous, and I’ll look forward to the next tests side-by-side with the top guys in the premiere class.”

Di Giannantonio: "It was a party at Mugello. We’ve been progressing ever...

The Soft front will be a good solution for the less aggressive riders who need good feedback and high grip levels at maximum lean angle. The Hard...
7 hours 19 min ago

“I don't know when he'll be back. When he feels ready, he’ll come back, not before. Then he’ll have to work on his muscles, see if his shoulder is...
18 hours 57 min ago

"In the morning I was closer, but in the afternoon Fabio made another step, or rather a ‘big step’ in braking. And I was already at the limit. That’s...
22 hours 3 min ago