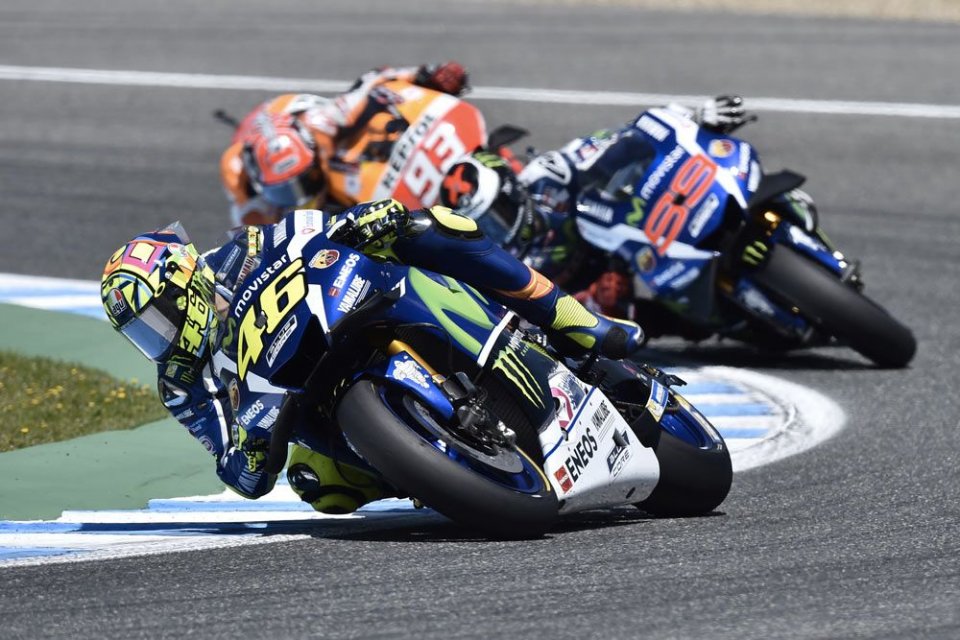 Which is the most engaging championship? The current one, with three riders fighting for the title, divided by 22 points after 7 races, or was last year better when, at this point of the season, there was only one point separating Rossi and Lorenzo? The question is clearly rhetorical, but this season is definitely exceeding our expectations.

There's a three-way fight at last, with Marquez who hasn't ruled himself out as he did in 2015, having won less and crashed more. Now the 3 (the perfect number according to Pythagoras) are fully fit and promising to remain so until Valencia.

Whether better or worse, the 2016 season is clearly very different to the previous one and there are several reasons for this, from the regulations, to luck, to the riders' mentality.  One year ago, after 7 GPs, Marquez had 56 points less, a huge amount, while Lorenzo had 22 more and Rossi 35. In terms of wins, Valentino has won the same number of races (2), Marc one more (2 for him too) while Lorenzo is one down (3 compared to 4 consecutive wins).

All of these elements make for a more unpredictable championship than last year, with continuous changes despite there still being two thirds of the championship to run. This can be clearly seen in the table here below, Jorge started out in the lead, was passed by both his rivals at Austin then recovered to get back in front of Marquez at Le Mans, before coming to Barcelona, where the group closed up after Valentino lost ground at Mugello. 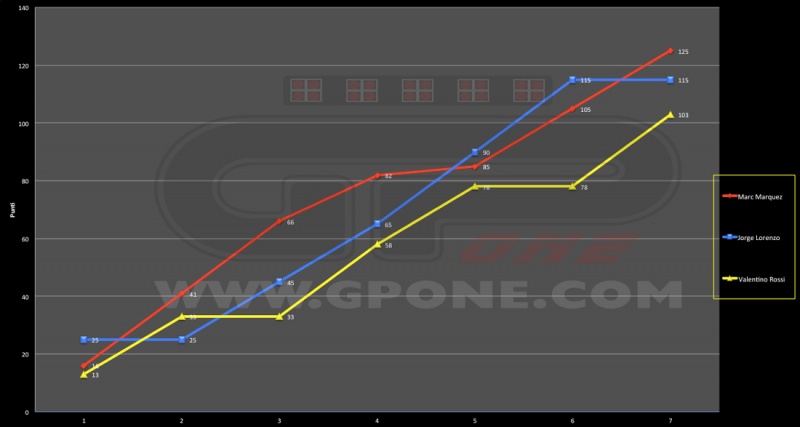 What's changed compared to 2015? Many things, the first being that Marquez has learned from his mistakes and has realised that titles are not only won by being quick but also by using your head, especially when the bike doesn't do as you'd like. The Spaniard has admitted this, which doesn't mean he's not taking risks (remember the last lap at Mugello?) but any risks he does take are calculated ones. The result is that Marc is the rider who's reached the podium most often (6 out of 7 races) and hasn't scored even one 'zero', having even completed the French race inside the points zone after suffering a crash.

Lorenzo and Rossi have also made mistakes (in Argentina and in Texas) but the Yamaha pair have also had to deal with bad luck. Valentino suffered an engine problem in Italy, while Jorge suffered at the hands of Iannone at Barcelona.

Despite it all, Jorge is the rider who has won the most and is the most consistent, at least until Montmelò where he was struggling a great deal in the race, even before the incident with Andrea.

Valentino's results also serve to prove that the Yamaha is the strongest bike right now. He says he feels stronger than he did in 2015, despite being further back in the standings and he has shown to be able to fight at almost every track, without having to resort to a calculator.

A necessary quality in a season in which the tyres are playing an important role and errors are easily made. This is proved by the fact that the three riders leading the championship have only been on the podium together on one occasion, with one of them missing from the group in each of the other races.

We're still at the start of the championship, but all the elements to keep us on the edge of our seats until the end are evidently in place.