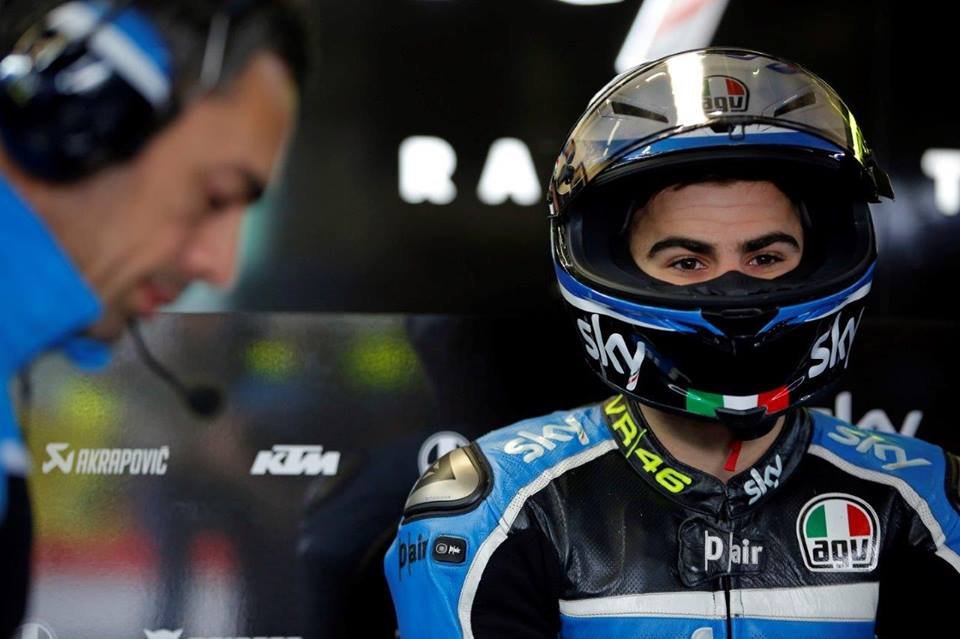 It is his last year in Moto3 and before he goes he wants to leave his mark. However, Romano Fenati has some catching up to do at this season start, because Brad Binder is looking down on the rest from the top of the standings in the smallest displacement class. For the Sky Racing Team VR46 standard-bearer, the games are not closed. to the contrary, there is still plenty of time to recover, starting from the next round, scheduled in two weeks' time at the University of Assen.

Were you hoping for a different start to the Championship?

“Maybe in a few cases a bit of luck was missing, but I don't think we are too far from the top. Binder is in the lead with a good advantage, but there were quite a few episodes in his favour, like during the last race at Montmelò. The season is still long and nothing is certain.”

At Barcelona you and Bastianini stepped on one another's toes a bit instead of staying up with the leaders.

“We both wanted to win, but we were not successful. I am satisfied with the fourth place finish, because we struggled all weekend and the podium was practically a mirage. In the race, on the other hand, we were competitive. More than Spain, I'm disappointed about Mugello, where we could have finished in the top three, but instead the engine left us stranded.”

What are you lacking to take that extra leap?

“To be honest, I don't know, because otherwise the team would already have figured it out. I think that in many of the episodes we were truly unlucky, whereas everything went right for Brad. I don't want to take anything away from Binder, since he is having a brilliant year.”

The next round is Assen, a track where you have often struggled.

“Let's just say that I've never managed to bring home important results. This year, however, I think I can be more competitive and I'm confident that things will go differently than the last edition.”

For the Championship will it be a three-way challenge with Binder and Navarro?

“I don't think so. This championship is wide open and literally anything could happen. I think Bastianini and Antonelli can also fight down to the end to win it.”

Bulega has proven to be a tough customer.

“He is having a good season. In Qatar there was a small misunderstanding between us, but the issue was resolved immediately. There is a good atmosphere within the team.”

Is having a rider like Bulega on the team added pressure?

“Absolutely not. The only pressure is what I can put on myself.”

Two weeks ago you tested the SpeedUP at Misano. Are you close to the big jump?

“It was a three-hour test that paid back all the efforts made over these years. MotoGP is my dream and racing in Moto2 means taking another important step toward the top class.”

Boscoscuro said that you made some interesting times.

“The SpeedUP is a completely different bike, specifically in terms of the riding setup. I will have to try to improve it as soon as possible when we begin the tests.”

You tested the SpeedUp. Now it's time for the Kalex?

“Exactly. I have a day scheduled with the Kalex in order to understand the differences between the two bikes. It will probably be next month, before the break, but I still do not know specifically.”

What scares you about Moto2?

“Nothing. It seems strange, but that's the way it is. I'll need to work hard in the tests so I can be ready straight away. I am well aware that there will be a lot to do. There will be a lot of riders from Moto3 that I can take suggestions from, like Rins, for example. In these two years Alex has shown big steps forward, enough to always be close to the top.”

There has also been talk of a break with VR46. Is there any truth to that?

“I think the break is only in the media. At the moment there is an excellent relationship that binds me to VR46, plus next year there will be the Moto2 project. On my part, and I believe on their part as well, there is only the desire to continue on the same path.”

This is the first time there have been two or more rookies on pole position in a single premier class season since 2006 with Dani Pedrosa, Chris...
4 hours 30 min ago