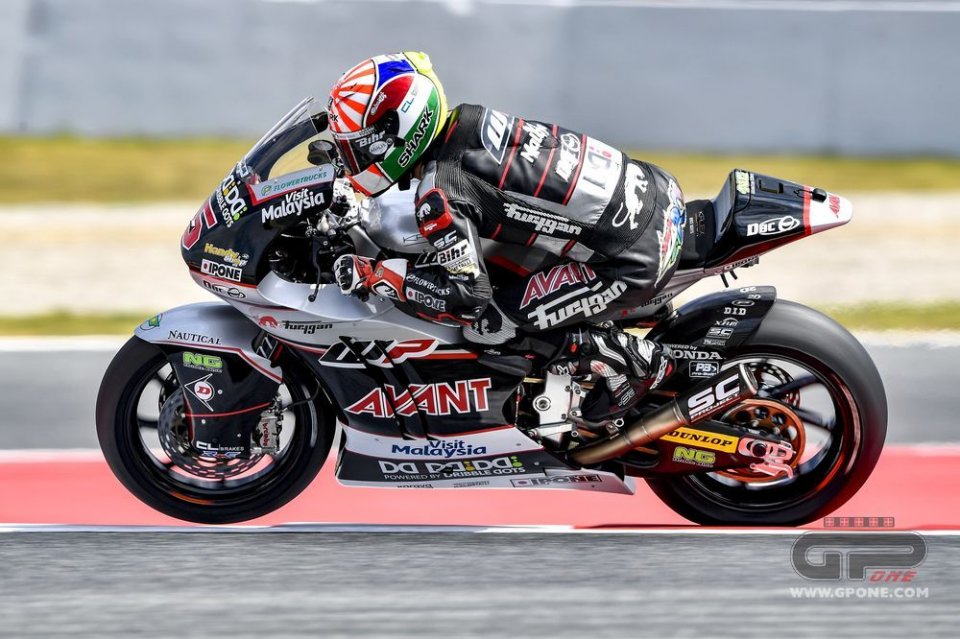 There was a palpable tension in the air before the start. It is difficult to accept what happened on Friday, but in the end everything went well: the seventh Middle Class race of the season was heated and professional, and reigning world champion Johann Zarco's experience was rewarded with the third win of the season that puts him back in the race for the title.

After finishing ahead of Rins, Nakagami and the rest of the pack, Johann went to the grandstand on turn 12, Salom's final turn, and dedicated the race win and a liberating burnout that chased away fears and phantoms to his late friend: “I decided to study Rins for quite a few laps. Then I attacked and once I found my pace I pulled the pin. This win is for Luis and the entire podium will celebrate for him.”

THE RACE CHRONICLE - Between the starting line and the first "S", the straight stretch is long and the group arrives fast and compact, and it's Swiss rider Thomas Luthi first into the right-left-right, followed by Nakagami and Zarco third, with Alex Rins close behind. In just a few turns the Spaniard on the yellow number 40 bike is already breathing down the German's pipes with the number 12 grey/black bike and he overtakes him on the slow chicane inherited from Formula 1.

Simone Corsi, making a comeback, is in fourth position, hunting down the first three: Rins, Zarco and Luthi. The first to fall is the Belgian, Simeon, who loses the front end and bids the rest of the group farewell.

In the third lap, Rins is still in the lead, whereas Alex Marquez and Syahrin overtake Corsi who makes contact with Baldassarri in the slow corner, sending both into the gravel… the Roman is forced to retire and Lorenzo gets back into the race, significantly set back behind twentieth place.

In the lead, during the fifth lap Rins makes an attempt to pull away and only Zarco tries to keep pace with the Catalan who, with nothing but track in front of him, is free to express all of his riding skills. Championship leader Sam Lowes is lying in sixth and locked in a battle with Alex Marquez and Japanese rider Nakagami. It is the umpteenth withdrawal for Sandro Cortese, in the garage with his bike broken down. Another withdrawal for Danny Kent, having problems with his bike.

Twelve laps from the end Nakagami shakes free of Lowes, relegating the Brit to seventh place. Sam doesn't appear to be having the best of days today and he is forced to limit the damage. On the ground suddenly, Alex Marquez falls on turn 10 to ruin a race that he could have finished on the podium.

Mattia Pasini is in eleventh place with eleven laps until the chequered flag comes out, ahead of Franco Morbidelli in twelfth. The two skilled Italian riders race well, but today the top spots are out of reach for them.

At the front the race is in a complete state of stasis: Rins leads and Zarco studies his every move, neither forcing the pace, nor risking an attack. Nakagami is in fourth place, trying to chase down Swiss rider Luthi, whereas Luca Marini crashes farther back, fortunately without hurting himself.

Seven laps from the end and Zarco finally attacks Rins at the first "S" turn, overtaking him for the lead. Nakagami gets by Luthi to move into third… the battle for the podium finally comes alive and the race begins to heat up, just like the Dunlops that begin to slide visibly, especially on the right shoulder of the tyre.

The battle for third place is the most heated with three riders involved, Nakagami, Luthi and Syahrin give it all they've got, on every braking section and every turn of the Montmelò circuit.

On the twentieth lap the Frenchman is still in command, leading the race authoritatively. His riding style is fast and clean, and Johann is not making any mistakes. Rins has to settle for admiring him from second place.

The final lap, and Zarco has by now shaken loose of Rins to cross the finish line for a solitary win, with Rins finishing second and the podium completed by Nakagami. Syahrin is fourth ahead of Luthi, Sam Lowes in sixth and Italians Morbidelli and Pasini in the points, finishing eleventh and twelfth respectively. Baldassarri does well to come back to finish the race in fourteenth place.

In the championship standings, Alex Rins now has 116 points, followed by Alex Lowes with 108 and Zarco lying third with 106. 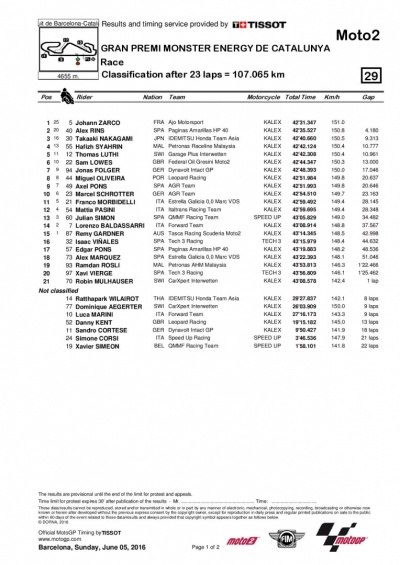