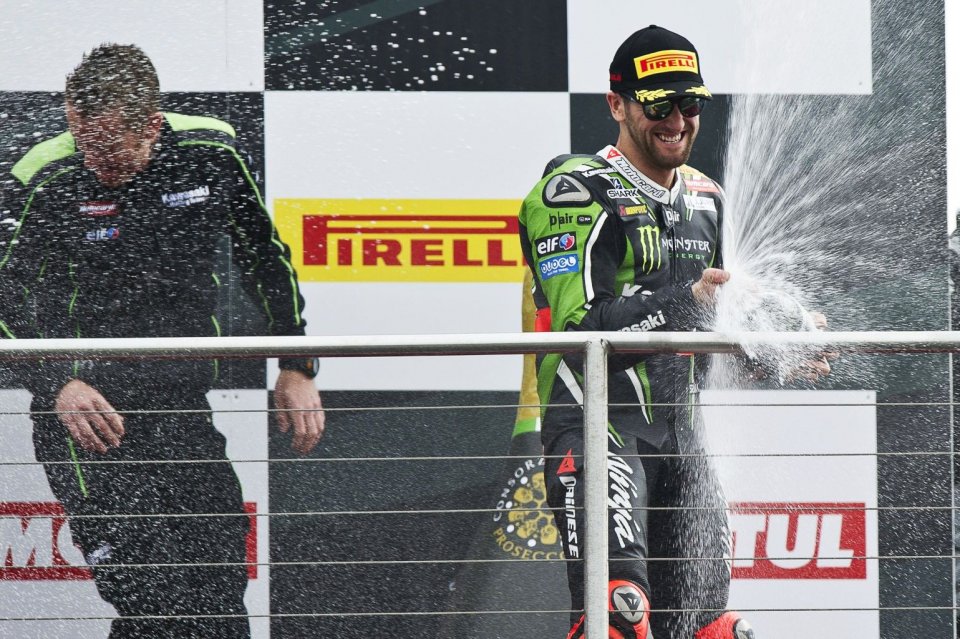 Happy is perhaps an understatement. Tom Sykes's mood at the end of race 1 at Donington is one of elation. Fast right from the practices and having smashed the lap record during Superpole, Tom scored a win that also secures his title as the best interpreter of the English track, with seven race win meaning he has beaten Fogarty's record.

At a track where Sykes, remember, is unbeaten since 2013:"There is no one reason why I've won so much at Donington Park, but what makes it more satisfying today is that I had to fight for it.." Tom goes on to analyse the race, one in which he had his doubts at the start :"I made a good start but those up front had a really strong pace." He adds:"I had some problems with the bike that I wasn't expecting, but despite that I tried to give it my all to take those 25 points. After six laps I thought it would be difficult to win today, perhaps impossible, but we held on, compensating for the problems we had in certain parts of the track with my riding. I'm really pleased to have won and the plan for tomorrow is to be stronger, more decisive and more coherent" concluded Sykes.

Jonathan Rea's mood is very different, though, despite the many problems in the race, he was nevertheless able to reach the podium and gain another 16 points over Chaz Davies, who crashed out today: "I reached the podium so I'm pleased about that, but I'm frustrated that we weren't able to fight with Tom and Davide at the end." He then added: "The bike was working really well at the start, but towards the end I started to lose grip at the rear and struggled particularly in the slow corners. Also my gears gave my problems five times and twice at the last corner, and this caused me to go long." Despite this however, Rea has regrets about this result: "In certain phases I could see that my pace was faster than the leading guys (Sykes and Giugliano), I'm disappointed I couldn't fight with them at the end".