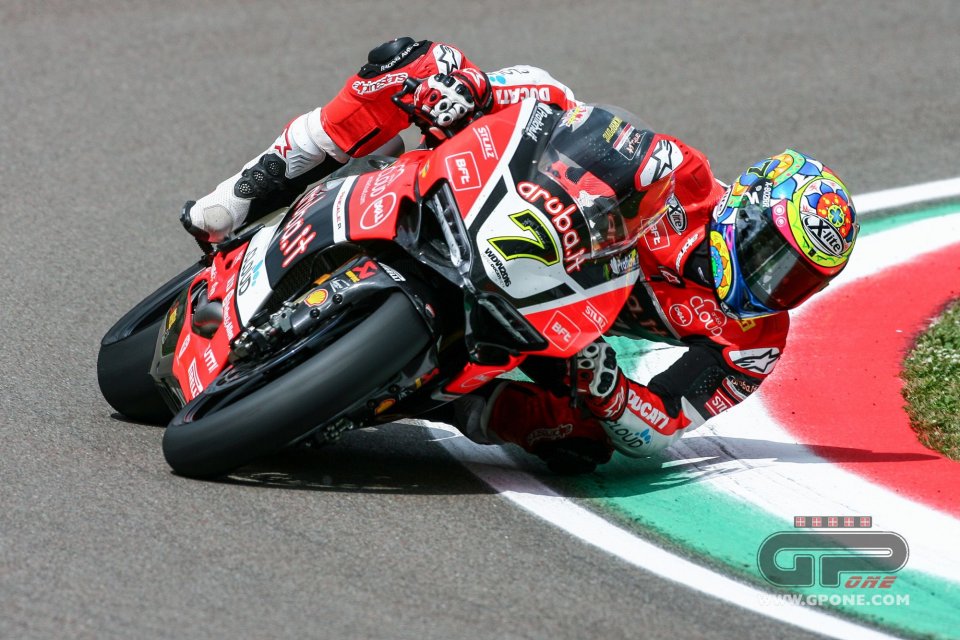 After a cold morning, the second practice saw the 24 SBK riders battling it out to set the fastest time.

The second free practice session was once again dominated by Chaz Davies on his factory Ducati Panigale, with Johnny Rea on the Kawasaki and Leon Camier on the MV Agusta and Lorenzo Savadori riding the Aprilia RSV4 all doing their best to keep up with the Welshman.

Tom Sykes made several attempts at setting the fastest lap but his Kawasaki continued to slide around, forcing the Brit to return to the garage on several occasions, between fast laps, as he tried to find the ideal setting, with his technicians working hard on the factory ZX10-R

Davide Giuliano was lapping around seventh place while Matteo Baiocco, subsituting for Fabio Menghi on the Ducati, closed in ninth position.

We noted something particular Kawasaki garage. Despite Johnny leading the way in terms of the championship, his teammate and rival Tom Sykes, who it is presumed will leave at the end of the year, was seen in intense talks with his crew chief Marcel Duinker (with whom he won a very well-deserved title in 2013) and, who knows, maybe Tom wants the Dutch technician to move with him….

There was also a lot of activity in the Honda Ten Kate camp, particularly around Nicky Hayden’s CBR. He’s further down the timesheets, but Imola is brand new for the Kentucky rider and 2006 MotoGP title winner.

Other stand-outs were a strong Jordi Torres with the BMW of Team Althea, close to the frontrunners, and, on the other hand, a struggling Karel Abraham also hindered by technical problems with Team Milwaukee’s BMW,.

15 minutes from the end of the session Tom Sykes was forced to leave his bike at the side of the track and walk back to the garage, shaking his head as he did so, despite having set the second fastest time overall.

German rider Reiterberger did very well to ride the Althea BMW into fifth place, a demonstration of the great work that Genesio Bevilacqua’s team have been doing since the start of the season, with De Rosa’s Stock 1000 win at Assen another example of this.

The session ended with Chaz Davies still on top, with a best of 1’47”04, followed by Sykes and Rea, proving that the British Empire still rules in SBK. 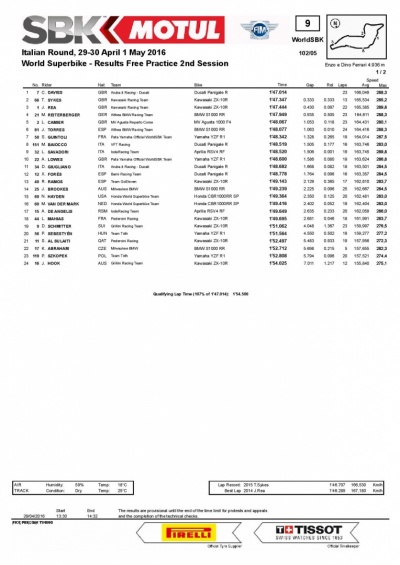