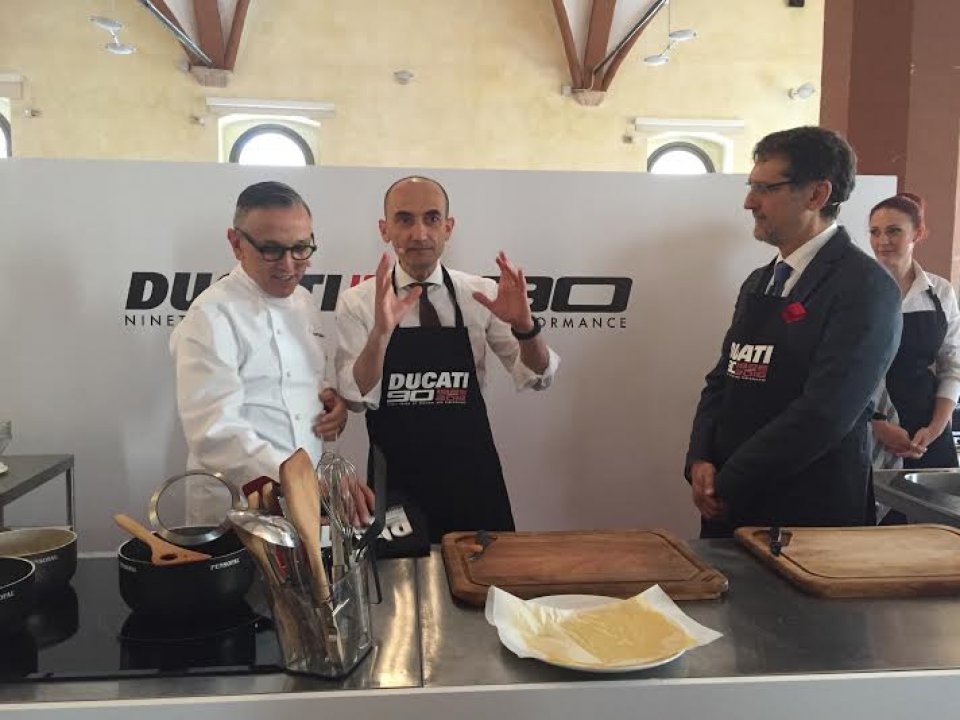 It's the ninetieth anniversary party and they couldn't wish for a better gift. Ducati's dreams of victory will hinge on Jorge Lorenzo next year. The very rider that there has been so much talk about, and with regard to whom the official announcement was made yesterday.

Ducati celebrates a story that began on 4 July 1926, with the birth of the Cucciolo coming twenty years later. The first race win arrived thanks to Paul Smart at Imola, in 1972, on board the 750SS. Eight years later the debut in Superbike, a series in which Ducati has achieved the greatest number of wins of all the brands.

Then MotoGP in 2003, and a promising start, with Capirossi's podium at the third race and his win at Catalonia. Then the Stoner years, the World title, the Rossi era and into the present with the two Andreas.

Telling this story was Claudio Domenicali, with the company since 1991, during the press conference held in the Sala Rossa of the Bologna City Hall in the presence of mayor of Bologna, Virginio Merola. As well as racing activities, the CEO also summarised the balance sheet in terms of production.

“It was an incredible year, with a production record of 54,800 bike and a turnover of 700 million euros. We also hired 200 new people, while entering the Enduro market with the Multistrada and the Cruiser sector with the XDiavel. As far as the Scrambler's concerned, I want to point out that there are 16,000 new customers."

On the racing side, the first rounds have shown that the Ducati is competitive.

“As we didn’t even win one race in 2015, I’ve told Gigi Dall’Igna that this year we should win two. So far this season we’ve proved to be consistent podium fighters, but still need to reach the highest step of the rostrum. On some occasions, we've thrown results away, causing fans watching at home to jump on their sofas no doubt. Now we come to the European rounds and we're aware that it will be more difficult, but that’s racing."

How will you choose the rider to flank Jorge Lorenzo?

“It will be a transparent process, in which we’ll make careful evaluation. Both our riders have interesting cards, and have proved to be competitive. It will be a complicated decision, and one not without remorse, because both Dovi and Iannone have contributed to the development work. It's a pity there aren't three bikes."

With regard to 2016, what impact will Lorenzo's arrival have?

“Little impact, I think. Sport has its rules and in order to aim for a better 2017, this decision had to be taken at the right time. It’s the nature of the game. With the agreement made, we'll focus on debating what the future will bring”.

On track there are eight Ducati. It's not perhaps better, considering the satellite teams, to avoid strengthening direct rivals?

“I don’t exclude the possibility of a satellite team, though they have their own reasoning when it comes to selection. It would be great if both our riders could stay in the family, this would be really satisfying.”

Lorenzo is a cert for the future. Stoner on the other hand?

“Despite his absence from the world of racing, he’s happy. So I’d exclude the possibility of him returning to racing.

World Ducati Week will return in July. What should the fans expect?

“It will be a great event. We will also launch the Multistrada Enduro’s Round the World Trip, along a route made up of seven stages”