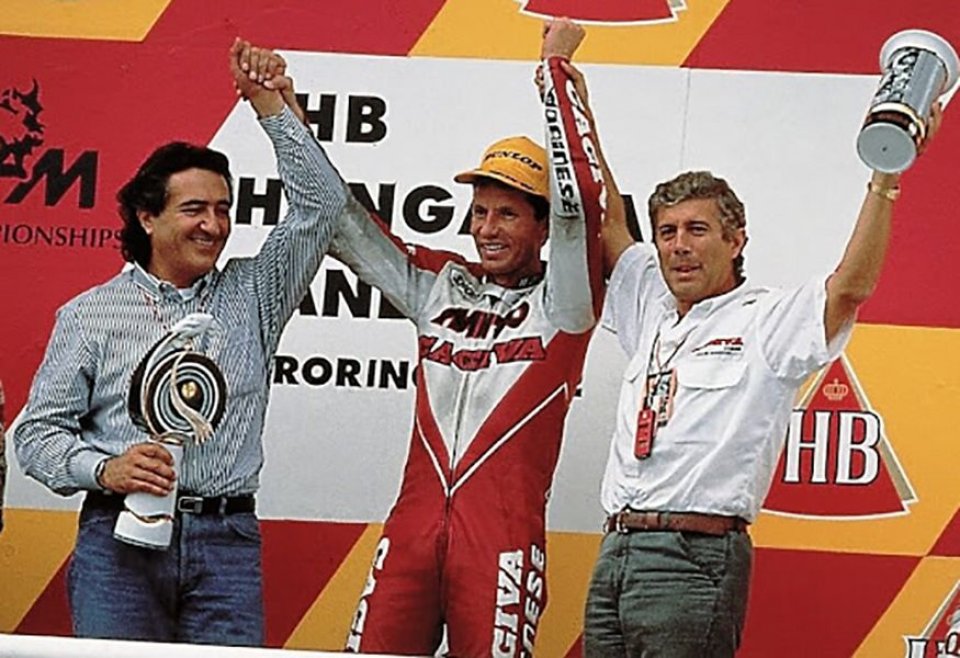 Receiving a phone call from Giacomo Agostini at the beginning of the new year is very gratifying, but even before saying hello I already know, putting aside all the best wishes, what he wanted to talk to me about: the interview given by Eddie Lawson to MotoStarr.

It was a relaxed interview, in pure Eddie Lawson style, during which the four-time world champion confirmed, if ever there was any need, that the relationship with the 15-time world champion, in the years of winning his first three titles, never exactly went as smooth as oil.

I hadn't written a line about the phone call, nor would I have written it. I let Mino listen to Eddie's words, so that there was no misunderstanding, but of course we all know how things go in the days of social media. Creating a bit of controversy between two characters of this calibre, especially in times when there is nothing to write about, is always tempting, as the constant bickering via Twitter between Jorge Lorenzo and Andrea Dovizioso has shown us. But we have too much respect for Ago and Eddie to limit ourselves to reporting Giacomo's (fair) recrimination.

Basically Agostini had something to say about the two points in which Lawson criticized him: a supposed cut in salary after his third title, and the choice of the tyre in that fateful Hungaroring victory, the first for Cagiva.

Eddie said it was his decision, Giacomo claims the birthright… So, let's summarize things: it was raining, the track was wet, but it's true Eddie and Cagiva also had nothing to lose.

"I knew that track was drying out quickly," recalls Ago.

Lawson, hastily, hinted that he told Giacomo to piss off before the start.

These are not necessarily conflicting versions: starting in the wet with a cut slick with the 500s of the time was not an easy thing to do. The decision, or if you like the proposal, whoever made it, was a gamble. A gamble that, in the end, Eddie Lawson had to make. But few, or none at the time, had the clean riding style he had. If there was anyone who could succeed in that hand of poker in the dark it was him.

A small detail that a lot of people don’t remember is that before Eddie took the lead, as the track dried out, there was another rider who, with a private Yamaha Roc, was in front: Corrado Catalano, who also started with a cut slick. The rider from Rome broke down, otherwise it would have been a good battle. Ah, yes… we forgot, Corrado was making his debut in 500…

In short, it’s acceptable that after so many years, both Eddie and Giacomo claim the decision was theirs. There must have been uncertainty, but also fear. Because sending a rider out on the track in those conditions is always dangerous. And Ago remembers: “in the first laps Eddie was dropping 10 seconds per lap…”.

The second point on which the memories of King Mino and Steady Eddie do not coincide is that relating to his proposed retainer for 1989. It was halved for Lawson, but identical to that of the previous year for Giacomo, despite the fact that 1988 ended with the world title .

"No way Eddie went to Lausanne to talk to Marlboro ...", commented Giacomo.

Who knows. Maybe he phoned Leo De Graffenried, the then plenipotentiary of Philip Morris. There were no cell phones at the time, but the phones worked. However, even here, it is a piddling question. Today the American remembers a cut in his salary: it might be the case. But Ago, who has an iron memory, could also be right. Of course, both are decidedly tough nuts and for the newly-crowned world champion to feel unappreciated it must have been hard to swallow.

I conclude with a personal memory that even today, after many years, brings a smile to my face. With a premise, a revelation made by Eddie during the same interview.

"I had already realised, at the time, and I think I was one of the first to understand the importance of training and nutrition. I was doing everything possible to be one hundred percent ready for the race. I was very careful  about what I ate ”.

So careful that he realized that the Marlboro-Yamaha team's pasta-based nutrition was better than that of the Rothmans-Honda team, which might have been excellently managed on the technical side by Erv Kanemoto, but left a lot less to be desired from a culinary point of view.

For this reason - the relationships between riders and journalists at the time were very different - I personally brought Eddie a plate of pasta from the Marlboro hospitality. The cooks knew, of course, but Eddie had left great memories in that team, to the sound of stacks of finishing prize-money left on the arrival counter. Until one day, I don't remember which circuit we were on, Ago nabbed me on the spot, that is, with a steaming plate of pasta headed for Lawson's motorhome. I'm not saying that he got angry, who knows maybe deep down he also took it as a compliment, but he clearly said to his guys that it should never happen again.

From that day on it was more difficult to fulfil my role as cellarman, but the supply of pasta did not cease...