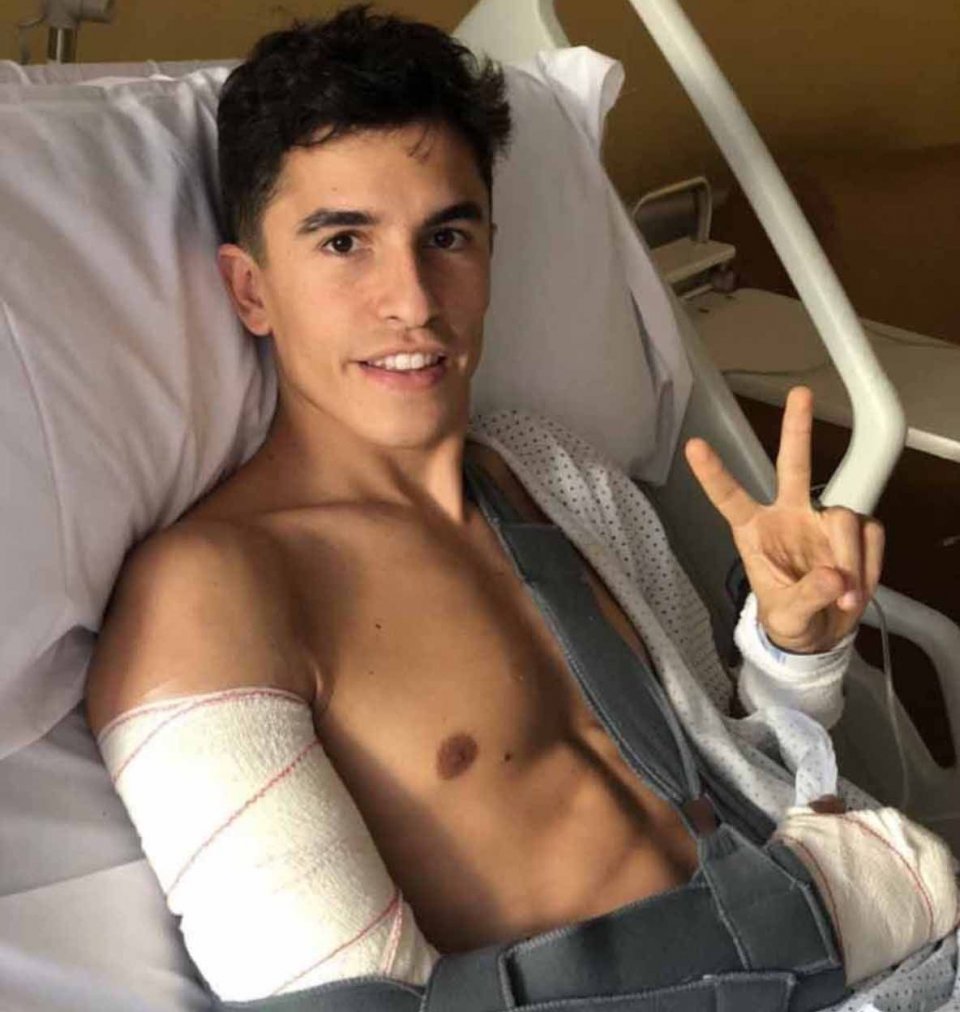 It lasted more than eight hours, the amount of time necessary for the various specialists to deal with each one of the issues related to a fracture that refused to heal due to various problems, including infection.

Three operations, in just over 4 months, are no laughing matter, even for a trained sportsman like Marc Marquez and undoubtedly now the best rider in the world is wondering who bears the responsibility for this ordeal.

As far as he is concerned, Marc has already said who he thinks are responsible in an interview with DAZN: “a rider always wants to get back on track as soon as possible, but it's up to the specialists to give him the right information”.

Emilio Alzamora, his manager, reinforced the message: "Marc trusted the doctors and followed their advice, he's not stupid".

Apparently, a few days ago, Marquez drew a line under the whole affair with a tweet that says all his determination: “Little by little I feel better, but the most important thing in this race is to reach the finish line, and we will achieve it!”.

The 'Marquez case': a bad story of wrong decisions

This bad story of wrong decisions would seem to end here, but is that really the case? Probably not.

The fact that Marc Marquez abandoned the team led by Dr. Xavier Mir and the Dexeus University Hospital in Barcelona for the third operation says it all. Obviously, little is leaked out from the clan of the eight times world champion, but every now and then a sentence is made public.

Once again Alzamora, shortly before the third intervention, made it clear: "The recovery is going slower than usual, because right from the beginning things were not done well", he said.

The 'Marquez case': shadow of medical negligence hangs over the assessment of fitness

There is therefore the shadow of medical negligence on the whole matter, starting with an incorrect assessment of physical fitness that allowed Marc Marquez to return to the track at Jerez just four days after the accident.

Now we need to understand with whom the blame must lie in the chain of responsibilities, and if we rule out the rider himself, who obviously gave his assent, but trusting the words of the illustrious primary physicians, we need to question the evaluations of those who, around him, had the task and experience of restraining him. There are three names: Dr. Mir, Angel Charte, who is the head of Dorna's medical service and Alberto Puig.

His predecessor in HRC, Livio Suppo, spoke about Alberto, team manager of the team, recalling the case of Jack Miller who, despite his contrary opinion, competed in two Grands Prix before stopping. A team manager has the power not to let a rider race, but he must also adapt to the opinion of the luminaries of science. He has the last word, but if the rider wants to race and two doctors authorize him, his decision is political, and has nothing to do with medicine.

The 'Marquez case': Puig had the last word, but he is the least responsible

For this reason we feel confident enough to say that, among the three individuals involved in this bad story, Alberto Puig is the one who has the least responsibility.

Furthermore, as an ex-rider, Alberto was probably the last one to want to stop Marc, whose greatness he recognizes.

Probably even Mir, due to his closeness to the Marquez family, must have had some difficulty making the right decision, and the fact that Charte is a colleague of his at Dexeus University Hospital, which belongs to the Quiron Salud group, can’t have helped. We would like to believe that none of the doctors involved in this case wanted to publicly exploit the miraculous return of a national idol just four days after a serious accident, but certainly a greater distance between the protagonists would have helped.

So in this collusion of interests, of fellowship and friendship, Marc Marquez was given authorization to race. A chain of events that we now know have caused a serious misjudgement that could even have consequences on the champion's career. And we're not just talking about the fact that the third intervention will probably force him to miss more Grands Prix.

At this point, we enter the very intricate terrain of the responsibility of the surgeon, who also must respond for any errors made by subordinates as he is guarantor of the entire operation. From this one could deduce Mir's lack of responsibility, assuming that the first operation was perfect. But it was still his job to advise Marquez against subjecting a plate to the effort of controlling a MotoGP bike.

The 'Marquez case': inexperience, negligence or imprudence of doctors?

As Dr. Charte moreover could have done, but he would have had to disavow a colleague. At this point one must distinguish between incompetence, negligence and imprudence.

We can speak of imprudence when the doctor acts recklessly, with excessive haste, with unjustified haste, without adopting the precautions indicated by common experience or by precise rules dictated by medical science.

Negligence, on the other hand, occurs when, due to lack of attention or superficiality, the common rules of diligence that it is legitimate to expect from a person authorized to practice the medical profession are not respected, since they are observed by most doctors.

Therefore, while imprudence consists of active conduct, contrary to the fundamental rules that common experience recommends for safeguarding the health of the patient, negligence consists of omissive conduct, in the sense that what medical science advises to do is not done in the specific case.

On the other hand, incompetence occurs when the conduct of the doctor is incompatible with that minimum level of technical knowledge, culture, experience and professional capacity, which constitute the prerequisite for the exercise of the medical profession.

But here we are on the outskirts of a minefield, in which it will have to be decided whether Marc Marquez, or even Honda, can be considered as the injured party. And maybe it might not be a decision made solely by Marc. Usually in these cases expensive insurance companies are involved and Lloyds of London, or whoever for them, will have to ascertain responsibility before covering the premiums.

“It’s happened to me a few times in the past. My arm is fine, but I left something on the table in qualifying. It’ll be important not to make...
19 hours 31 min ago

Paolo Scalera
Dovi explained that he needs to adapt the Aprilia to himself before he can go fast, but after being questioned on the subject of Lorenzo's manias in Ducati, he denied that the competitive level...

Paolo Scalera
From 12 to 14 Dovizioso will be at Jerez for the test with the Aprilia RS-GP. Stefan Bradl will also be on the track, again in the role of test rider. What if Marquez decides to take a ride with the...