There are those observers who said, jokingly, that everything was planned: Rossi’s signature with Petronas for 2021 has arrived and also the return to the front row that he has missed out on since Silverstone last year.

Maybe, but when Valentino, albeit on one of his favourite tracks, joins two wild and fighting youngsters like Morbidelli and Quartararo on the front row just three-tenths behind them, at the age of 41, all you have to do is take off your hat.

You might not be a fan of his, but on occasions like this it is impossible, in the name of the god of speed, not to take a respectful bow.

Because to set those times you have to take risks, even if it’s only for a single ‘hell-for-leather’ lap, decide to cross the Styx after 9 world championships… and that is not for everyone.

After all, we can see it in the attitude of some riders: Jack Miller never backs down, and it is no coincidence that he is fourth overall and first Ducati rider in the BMW M Award which will be given to the best poleman at the end of the year.

While we might have expected this sort of performance by the Yamaha riders, if we include the fourth fastest time of Vinales, both Jack and Johann Zarco on the second row deserve our praise. In fact, if it is true that the Michelins do not adapt to the Desmosedici, this means that to set the times you need to put in something extra … and that something extra is courage. And therefore Danilo Petrucci also deserves a mention for having grabbed the third row with ninth fastest time behind Pol Espargarò and Joan Mir.

It can’t have been easy, so it must have been a ‘hell-for-leather’ lap, which maybe tomorrow will lead to nothing but it does, in a certain sense, honour the fighting spirit that the fans of the Rossa respect.

That said there are five considerations to make on this strange world championship that still seems to be in search of a true protagonist.

Rossi: Did he do the right thing in agreeing to join a satellite team?

At Barcelona we understood that, in all likelihood, 2021 will be Valentino's last season. An annual contract, without an option, as confirmed by the man from Pesaro, is a clear signal. Although it is (partially) true that beyond 2021 no manufacturer has a signed contract with Dorna. However, as long as Vale can start from the front row or do satisfying Grands Prix, he has every right not to quit. Even though of course Rossi would have expected to finish his career in the factory team. His signature came at the end of a long negotiation, but Yamaha did not yield to an option in Rossi’s favour. With three youngsters in the team, it could even have done it…

Dovizioso: Can a rider win the world championship without occupying the centre of the ring?

We have no doubt that Andrea will climb the slope from the Bronx of the penultimate row tomorrow like a salmon swimming upstream but starting so far back certainly does not reflect his position in the standings. Also because, if we exclude Rabat, he is the last Ducati on the starting grid. And while it is true that the world championship is won by the total amount of points scored, it is also undeniable that if the centre of the ring is not permanently occupied, it is not much of a fight. A global challenge deserves a global fight.

KTM: Is this really one of the most complete MotoGP bikes today?

The Mattighofen manufacturer has conquered a place among the greats this year and given that in 2019 it finished the world championship in just eleventh position with a 6th place by Pol Espargarò at Le Mans as best result, we must recognize that the Austrians have done an incredible job. Better than anyone else. Pol is fast, but with a little more consistency the KTM would be ready for the title.

Suzuki & Mir: Are these two MotoGP outsiders ready for the title?

If we were to say who, this year, among all the riders has made the biggest step forward, probably the name to emerge would be that of Joan Mir. It is he who has scored the most points in the last four Grands Prix. The Suzuki has also taken a big step forward, from a competitive point of view. It fights for this position with the KTM. It is absolutely to be taken into consideration for the world championship.

Could Marquez have won the world championship with a bit more patience?

We honestly don't understand those observers who are surprised by Honda's position, with the absence of Marc Marquez. Last year, Lorenzo’s dramatic season aside, Cal Crutchlow only finished ninth, with three podiums. Obviously, there is no way of knowing, but if Magic Marc had been more patient he could have won the title even if he had returned at Brno.

What is Aprilia missing to be among the protagonists?

The Noale manufacturer has long been among the most successful in history and as far as we Italians are concerned, it has in a certain sense inherited the greatness that first belonged to MV Agusta and then Morbidelli. Its recent past in Superbike also confirms the good things that the Venetian manufacturer can do. In MotoGP, however, it must make up its mind whether or not it wants to cross the Rubicon. Already penalized for having only two bikes on the track - but Suzuki is in the same position - this year having decided to wait for Iannone, it is basically on track with only one rider, Aleix Espargarò, fast yes, but not very consistent. Now that Andrea Dovizioso is on the market, should the other Andrea really run into that feared disqualification for doping which has already partially compromised his career, we think that Aprilia shouldn't think twice… 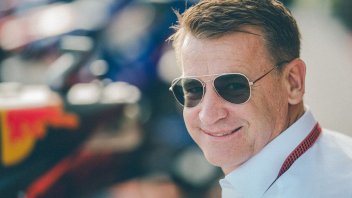 Beirer: "Pedrosa, a turning point in the KTM project, we never copied"

“I wasted too much time with Zarco, but Johann wasn’t smart because he let Mir break away and slowed me down.”
12 hours 52 min ago

PHOTOS - The KTM rider will have to serve a Long Lap Penalty in the next race, same penalty for Daniel in Moto2
15 hours 15 min ago

"The second tyre had no grip in qualifying. I didn't help Dovizioso, there was nothing planned, he was just behind me”
1 day 17 hours ago

“If he keeps the same pace of the FP1, he’ll win with eleven seconds of an advantage, but nobody asked me anything, and I wouldn’t do it either way....
1 day 19 hours ago

On the day of the announcement of his move to Moto2, the 2020 Champion obtained yet another pole of the season, distancing his rivals by more than a...
1 day 22 hours ago

“We have to really risk it to overtake them. Obviously, having them behind would allow you to break away. At this point, Nakagami is also fighting...
2 days 50 min ago