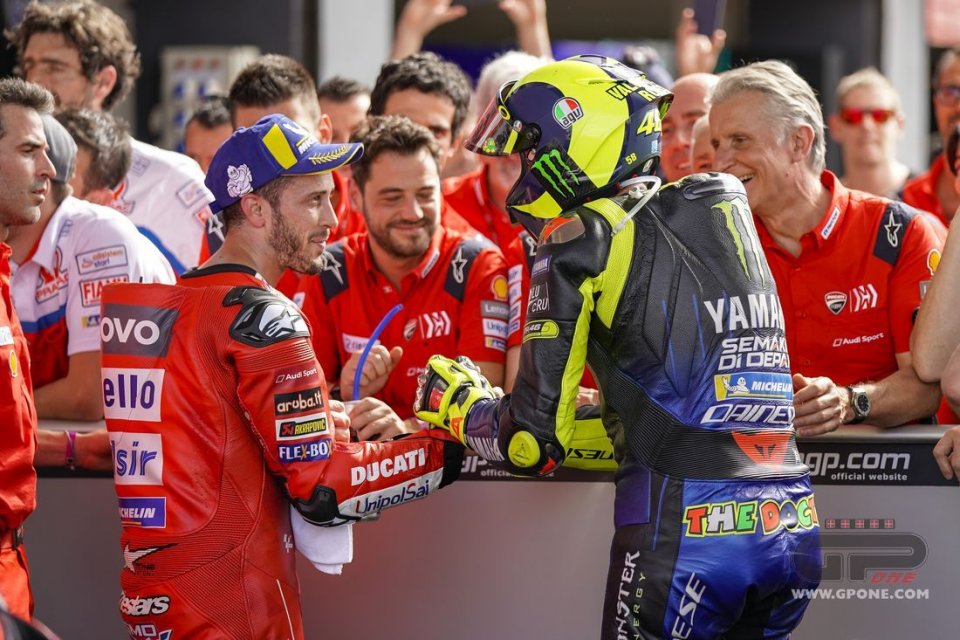 Rossi is no longer a thing. Lorenzo is the shadow of himself. The one we see on the track with the name Aprilia is just a pale stand-in for the bikes that made the team from Venice famous in the world of two wheels. And Ducati is also in danger of not being the second force in the championship. Even if, at the end of 2019, this doesn't guarantee the rankings.

Why is this happening? This is the question we ask ourselves at the end of this championship that, besides the battle for the Moto2 and Moto3 title, seems to have exhausted reasons of interest, partly because of Marc Marquez's super power.

Actually, the entire two-wheel world is changing. And if this is obvious, as far as the riders are concerned, with young ones advancing and starting to overshadow the myths of the past, it's also undeniable that both the constructors and the old champions are called to adopt new strategies to continue to excel... or survive.

Two riders in a crisis: Jorge Lorenzo and Valentino Rossi

Let's take the mystery of Jorge Lorenzo. It intrigues us because we saw him win and, today, we don't recognize him, but we don't even recognize Valentino Rossi, busy with numerous transformations without knowing this time if, from the chrysalis in which he is cocooned - fourth man for Yamaha - a butterfly will break free.

Let's face reality: 2020 doesn't look good for the big losers of 2019. If, in fact, the rider from Mallorca has to hope that Honda will make a miracle happen by creating a bike just for him, Valentino must pray that his new chief mechanic, Davide Munoz, will manage to get him out of the quick sand he's stuck in because, if Yamaha is second and fourth with Quartararo and Vinales, it makes no sense for Rossi to fall at the 20th lap after having already accumulated an almost 15 second delay.

Ducati: We need a new bike and also new riders, but that'll be in 2021

Jorge's and Vale's is a real endevour. This also involves Ducati that, in 2020, will be fighting it out with Honda, Yamaha, and Suzuki, and their young and arduous riders, with a team that can only count on the 33-year-old Andrea Dovizioso - the best of the rest.
At his best season ever, at least when it comes to points, he still left the title in Marquez's hands in four Grand Prix races from the end.

Which makes us think that, unless Gigi Dall'Igna lets a super bike ride out of the Borgo Panigale gates, the next one will be a year of litanies. During which Claudio Domenicali, if all goes well, will have to replace two out of four riders. Without holding any high card.

Of course, there are those who are worse off. Aprilia for example.
In its fifth year of participation in the MotoGP, in fact, the team from Noale is again at year zero.
Over the years, Bautista, Melandri, Laverty, Bradl, Aleix Espargaro, Sam Lowes, Scott Redding, and Andrea Iannone took turns at the helm of the RS-GP and, if we eliminate several good performances in qualifying, we can't make head or tails of it.

After the umpteenth debacle at Motegi, like a true team man, Massimo Rivola, Aprilia Racing's CEO, with a past in Ferrari, exposed himself by talking to us instead of his riders because "we have to protect them."

The former number one of the Academy, which Charles Leclerc came from, exposed himself quite a bit.

The new RS-GP is being built in Noale, with reinforcements from the F.1

A completely new bike is on its way: engine, electronics, frame, aerodynamics. And also new human resources: along with Marco De Luca, from McLaren, Paolo Biasio will also be added, who we remember alongside Max Biaggi.

But the point is moot. We have to roll up our sleeves because Luca Marini's and Lorenzo Dalla Porta's victories at Motegi can't be enough.

Even if Leopard's rider could bring back the title of the minimum displacement that Italy hasn't seen since 2004. Thanks to a certain Andrea Dovizioso.

"We tried the wet track last year; we need to be careful about the closeness of the barriers. We need to talk to Michelin to avoid the mistakes with...
47 min 12 sec ago

For the Austrian and Styrian Grand Prix, a new medical service for the riders is scheduled for the next two weeks
1 day 1 hour ago

Team manager Jansess: "it's still not exactly clear what's wrong with Jesko." Maybe he'll be able to race back to Misano
1 day 4 hours ago

The Covid-19 pandemic remains a source of concern in Japan. As a result of stronger restrictions on entry in Japan, international teams and riders...
1 day 8 hours ago

The former 350 world champion, official Yamaha and Honda rider, will take part in the 'Motegi Endurance Race' on 23 August riding a CBR250RR. '...
2 days 2 hours ago

After having made contact with Josh Brookes, the Race Direction decided to disqualify the Honda rider from Race 3. He'll be starting last at...
2 days 6 hours ago

The venue for the last Grand Prix of the 2020 season has been unveiled, and it'll take place on one of the most spectacular tracks in Europe. The...
2 days 8 hours ago