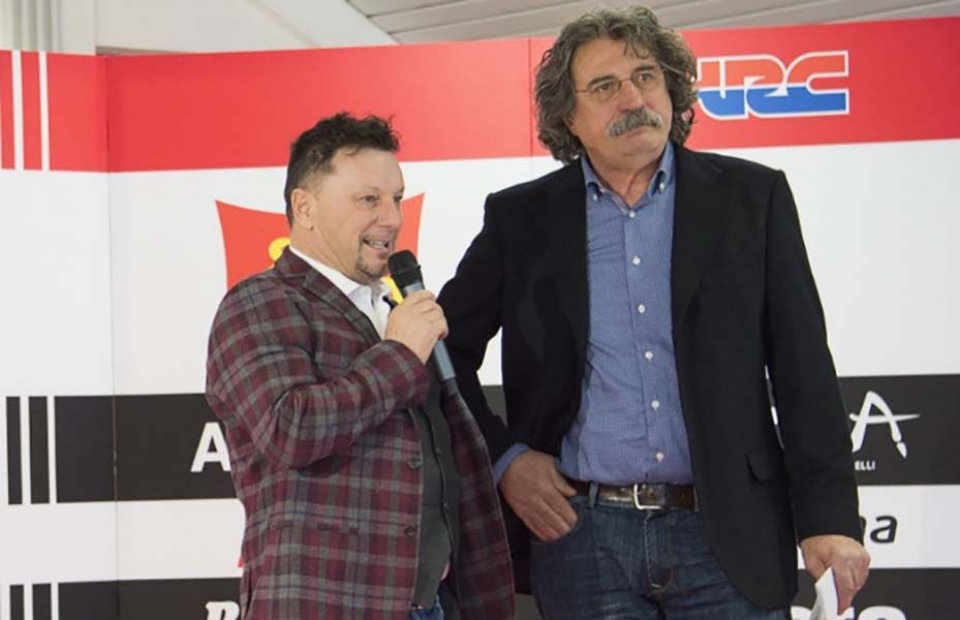 There are certain men who can feel life. It can be a great privilege, but also an incomparable grief. Men like Paolo Simoncelli have felt life in their hands, on their skin, in their hearts. In their soul. "Moving on? My strength and that of my family is to have no regrets. This gives us exaggerated strength. On bad days the only way is to say ‘fuck off’, say it with all the passion you have inside, ‘fuck off’, and move on. Otherwise this thing kills you. But above all we must not have any regrets ”. He has learned to only look ahead, since he saw his son Marco's life vanish before his very eyes. But life never stops tormenting us. And we turn to those who have already been able to show us the way.

You and Gresini were friends. Do you have a first memory of Fausto?

“When I wanted to make up the team to leave. He knew it and told me I want to be there, even at one percent. He behaved like a perfect partner, he always told me: 'Paolo, the team is yours'. But he wanted to be there. We didn't get to know each other much, but we used to joke during Grands Prix. A very nice relationship ".

What does the motorcycle world lose?

"A lot. Someone who has lived that world with passion and dedication for forty years, from a rider he became one of the most important teams in MotoGP, indeed of all three classes. But what we will miss is the man. In one way or another, companies move forward ".

When did you last see him?

“On the return journey from Valencia. He offered me a ride on his private flight. That was my last meeting with him. Then we spoke again on the phone ”.

Are you still thrilled or have you toughened up?

“No, I get very excited. I got old and the older you get, the more you become a child. In good times I try to enjoy everything to the fullest. This life seems to pay you back ten bad moments for every good one. But maybe that's the case for everyone ”.

Have you ever wondered what the meaning of an end is?

“I hope there is something, but besides hoping I have also had some certainty, something that happened to me. The desire to embrace Marco is so great that I know that we will embrace again”.

What kind of experiences?

“No, I want to keep this for myself”.

"I was hoping that this whole pandemic thing would be solved a little earlier, but it's a nasty beast. I think that from July, perhaps from August, we can start with a semblance of normality. Living like this, with not being able to plan, not thinking about tomorrow, not talking to anyone, everyone is doubtful, everyone is afraid, it's really stressful ".

And on a racing level?

"We will win the world championship and we are fine". (laughs)

“We want to be protagonists, yes. Suzuki has all the right credentials to be up there. And Fellon instead has plenty of time to mature. So we aim to do well. In the CEV I have five other riders, and then the electric bike with Casadei is not to be overlooked ”.

Did Suzuki understand who Fellon is?

(laughs) “Yes, yes. Fellon is the Suzuki who started with me, I hope he has the same desire, the same determination. He’s very tough, but there are things that no one has taught him, he's a bit rough, we have to do a good job. "

How difficult is it to carry a team ahead with this situation?

"It is difficult, a lot. Apart from the fact that it is now an all-year-round job. You first started in January-February and finished in November. Before there was family, free time, now everything is different. There is no longer the father who arrives with a cart attached to the car, and you go and do a race or the world championship. No, now a Moto3 team is something else. And if the pandemic is not resolved it is difficult to recover ”.

Has it lost its charm?

"No, the charm is always there, and then the TV is now spectacular, there never used to be races like this and they weren't so popular. The problem always remains an economic problem, which conditions everything ".

You are dealing with so many young guys, how has the generation changed?

"A tyre change costs a certain amount of euros, think of an average of ten laps ... It's cruel for everyone".

What has the pandemic taught you?

"Nothing. It takes time away, it castrates me, it's not good, at my age I need to enjoy everything, even the minutes ”.

Are you afraid or are you used to it?

“I try to be careful, but you can't do anything about it, everything is all mapped out. There are certain things, coincidences. Did you hear about the guy who was hit by a boulder in the driver's seat? It could have ended up on the boot or somewhere else. But no. Marco died because the wheel hit him on his helmet. Sometimes there are things that make you think it couldn't be otherwise. So let's be careful, let's do our best ”.

You have also lost two cousins…

“I was very attached to one, Sergio. It happened last March. The second passed away a few days ago, he was older than me. But it is really something horrible ”.