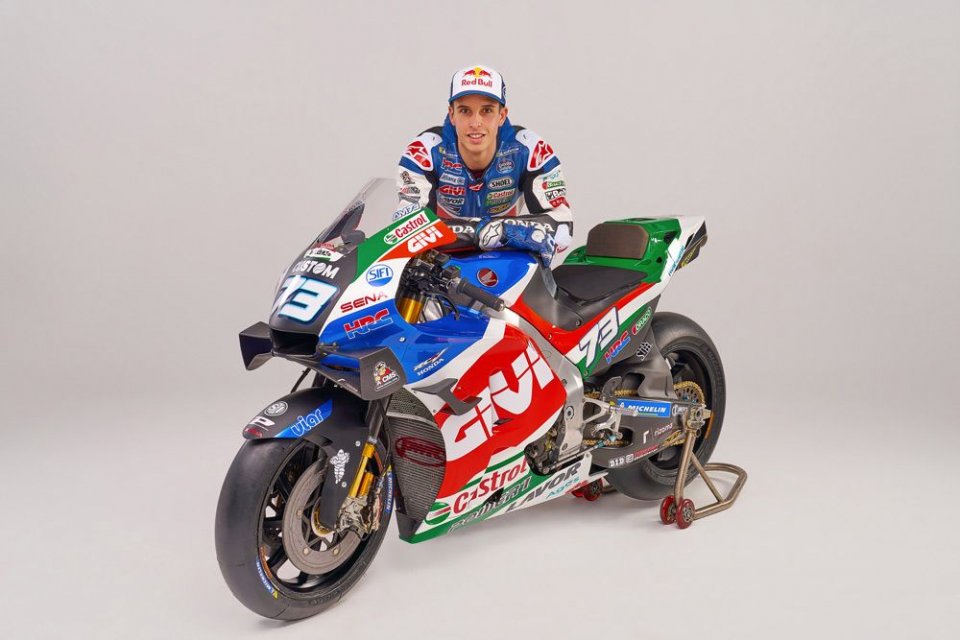 The big day has arrived and Alex Marquez didn't even have to move from his home town Cervera for his first day as a rider of the LCR team. “Lucio wanted a theatre, here we have one and it's also cheap” the Spaniard joked. His passage from the official Honda team to the Cecchinello satellite team was discussed at length last year, for Alex the situation is that: "in this team I think I will only have advantages, there will be less pressure and more tranquillity, as well as a family environment. I wouldn't have come here if I wasn't sure I could grow as a person and as a rider ”.

Also because the RC213V will be 100% official, like all those of the other Honda riders, regardless of the colour they wear. Furthermore, with Marc still on the side-lines and Pol Espargarò who does not know the bike, the LCR riders will be the ones with the most experience. As the other Marquez, Alex doesn't really like to answer questions on the subject too much, but at least one regards him.

"Marc is better, you can also see it from social networks - he said - Of course I miss not training with him, but also considering the two operations behind him, this is the third winter that we haven’t trained together, let’s hope we can do it next year. Meanwhile, I’m training with Vierge ”.

Alex is preparing as best he can for his second season in MotoGP and, after the two podiums in his debut year, expectations are high.

"I don't think I will have more pressure than last year, when after Marc's injury I found myself having to develop the bike and, honestly, I was not prepared to do it - he admitted - Now I am and we will have many things to try in Qatar. What will I bring from the official team? I hope good results - he smiled - We all want them, from the team to me to Honda, they are not a goal but the result of the work. Logically I would like to win my first MotoGP race, and last year we saw that anything can happen, but I'm not obsessed with it. If it has to come it will come, I only think about committing myself and continuing my progression. The goal is to be regularly in the top seven, even better in the top five".

Marquez last year was a surprise, not many people expected to see him on the podium in his debut year on a difficult bike like Honda…

"This year I think it will be easier for me; after a complicated first part of the season, in the second I improved day by day - he recalled - But, as someone said, it was not only thanks to the bike but to my evolution as a rider. If now the others look at me differently it is positive ”.

The Spaniard also knows where he has to work…

“On qualifying - he said without hesitation - There have been races in which I lost seven seconds in the first three laps because I started too far back, then it was impossible to recover. On the one hand, I still have to understand the Michelin tyres better, but I'm also training in motocross and flat track to be more aggressive. However now I have more experience, this will allow me to make more changes to the set-up. Already last year I went in Marc's direction, his set-up is critical for the front tyre but it's the right way to go well on the Honda. "

The bike shouldn't change too much…

"As they have not been able to intervene on the engine, Honda has focused on the details - confirmed Alex - In short, it will be an evolution and not a revolution. All of us riders have asked to be able to put down all the horsepower we have, which we have not always been able to do, and in Japan they have clear ideas ”.

All that remains is to start and, perhaps, this year to be able to have a good battle with his brother Marc, who many observers put as favourite for the title when he returns.

“We will see when and where that will happen, but I'm sure he will have a great desire to get back to being competitive quickly and get on the podium again. I don't know who will be the favourite, before starting all the riders have a chance to win” he concluded.