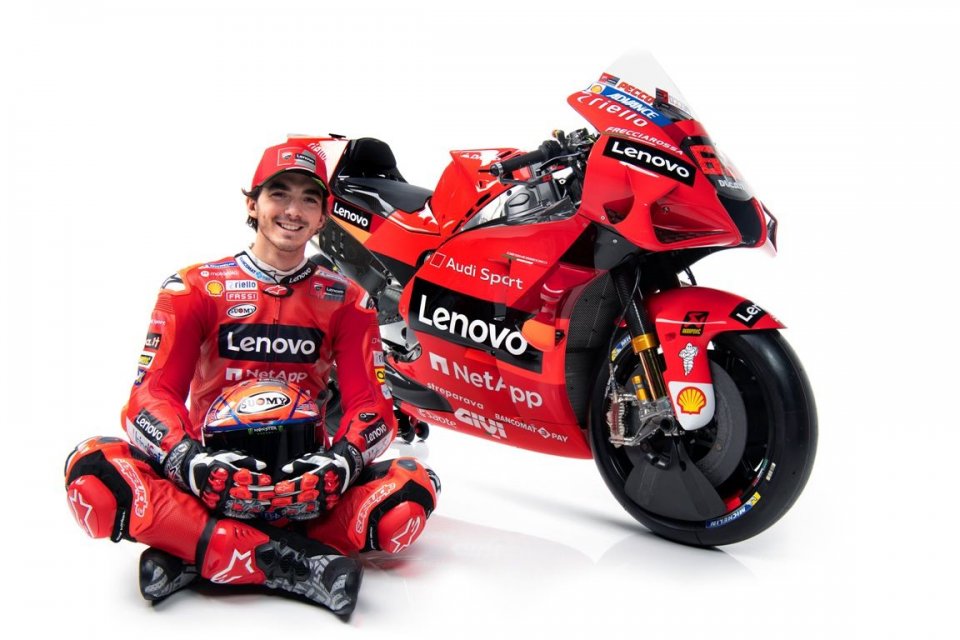 It could be defined as the classic first day of school, even if the bell has yet to officially ring. The fact is that Pecco Bagnaia's new adventure in Ducati as an official rider begins today.

With the farewell of Andrea Dovizioso, in Borgo Panigale they have decided to gamble heavily on him, alongside Jack Miller. On the one hand there is therefore the joy and satisfaction of having crowned a long-pursued dream, on the other hand the stimuli for a challenge that sees the bar rise more and more.

“What can I say, from dream to reality - began Pecco - when I wore this gear for the first time it was exciting. In fact, ever since I was a child, I have dreamed of being in this team, because we are talking not only about Ducati, but about the factory team. I am therefore proud, but above all happy and with me my whole family is too, as well as my girlfriend, who is a huge fan. I must say that the moment when I took the veil off the new bike was particularly exciting, since I hadn't seen it before. It was wonderful".

Bagnaia: "When you are in an official team the goal is the world championship"

Pecco, a new adventure begins. What is the goal?

"When you find yourself in the factory team, the goal is the World Championship, but first of all I have to win my first MotoGP race. In 2020 I came close, but unfortunately I wasn’t able to. I will therefore have to try to be consistent and fast, avoiding making the mistakes of recent years, especially when you find yourself having to deal with the cold conditions. In fact, an official Ducati rider cannot expect to finish fifth or sixth, or have blackouts after good performances. Precisely for this reason the goal is to win. There will be pressure, I don’t hide that, but pressure must be considered as a positive aspect to give the maximum at all times. Being in this team involves great responsibilities, but we are all aware of it ”.

“I've always felt good with Ducati and I have been faced with every situation, so I'm not worried, let alone the fear of being put under discussion. I am convinced that it will not happen, also because I have a good relationship with all the team members. It’s obvious that if you finish 15th in all the races, I'll be the first one to take a good look at myself".

Bagnaia: "It's a great challenge: many have tried but only one has succeeded"

In your life you have faced several challenges, but you have always managed to overcome them or at least come out unscathed.

“This is certainly the most important challenge of my life. Many have tried, but to date only one has succeeded. So I'd like to be able to be competitive and bring Ducati what it deserves. Taking up the baton of Dovi and Danilo will not be easy, because they did a great job together with Lorenzo. So I think I have a great responsibility, aware of the fact that it will be tough, but at the same time to show that the bike and the riders are fast ”.

Bagnaia: "I'll have more say in the official team"

What are the sensations inside  you?

“I feel strong and aware that I can fight for the top positions. Last year was tiring for me, especially due to the crash at Brno which resulted in a fractured tibia. I was tired, but at the same time I proved to be fast with the Ducati. I mention, for example, the Jerez race, or the Misano one after returning from injury. Now that I'm in the Ducati Factory team, a new challenge begins and I'll have even more say in the matter. I will give my best, trying to understand how to solve the problems that emerged in the second part of last season and understand how to bridge the gap that emerged with Jack. In fact, I'd like to arrive at the end of 2020 and see the Ducati bosses happy and at the same time me too”.

Bagnaia: "I explained to Luca Marini how the Michelin tyres work"

You will be in the official team, while in the Esponsorama team we will find Bastianini and Marini. Have you spoken to each other?

“I’ve spoken with Luca several times about the Ducati. I explained how the tyres work and the braking, one of the key aspects of this bike. Compared to him, I was missing these things when I arrived in MotoGP. Luca and Enea, however, have a more similar style than mine in riding the Desmosedici, since Marini is a rider who braked hard in Moto2, while I had more corner speed. I hope for him that his adaptation is more simple than mine, aware of the fact that Luca is a very intelligent person. On the other hand, I see Enea less, but I will meet up with him in Jerez in the next few days. I won't have any problems exchanging ideas with him, since we don't need to hide anything between us, as we will then discuss things with each other during the season. I just told both of them to stay calm and not to be like me, as I immediately looked for the flying lap time on my first exit. In fact, it is better to try more styles to find the right way forward ".

Bagnaia: "The Ducati today has nothing to do with the one ridden by Valentino Rossi"

Your mentor Vale also joined Ducati, but it did not go the way he wanted...

“Today's bike has nothing to do with the one Vale had. Many riders suffered with that Ducati including Dovi. When Rossi then returned to the Yamaha he managed to return to winning again. So I don't want to make comparisons with him, since this is one of the most competitive bikes on the grid ”.

A new challenge for you, but also for your father, who will be involved in CIV this year managing the VR46 team…

“My dad has always had something more than the other dads on the human side, as he is someone who loves being around young guys and interacting with them. I am therefore proud of this possibility and I am convinced he can do a great job. When he calls me, lately, we spend more time talking about his projects than about my results on the track or the races ”. 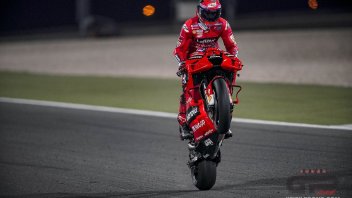 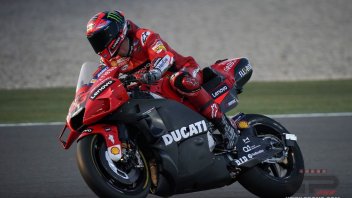