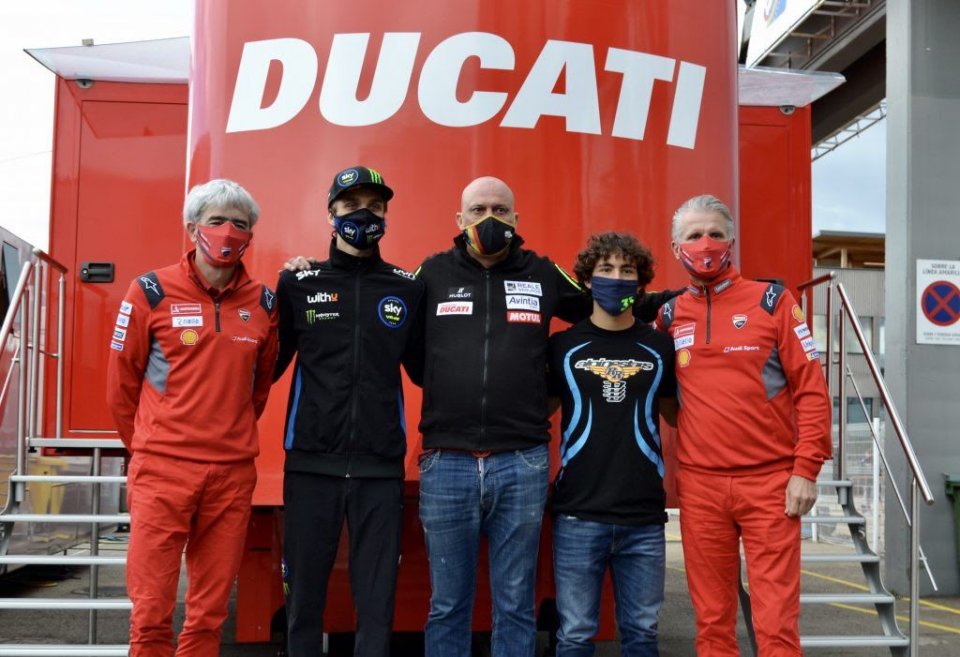 Until a few months ago they were fighting against each other for the title in Moto2, now they are preparing to start a new chapter in their career. Enea Bastianini and Luca Marini this evening, in Andorra, took the veils off their Ducatis, as teammates under the Avintia banner. In the eyes of the two rookies you could read the same emotion for what the future holds and together they also faced their first interview as MotoGP riders. Same questions but different answers, as different are their characters, while they do have the same desire to do well among the greats of motorcycling.

What was your first impression on the Ducati, even if it was stationary?

Enea Bastianini: “It's certainly positive, it's nice to get on it but I'm waiting to race with it”.

Luca Marini: "Fantastic, already last year I got on Dovizioso’s and Petrucci’s bikes but I didn't like the position on the saddle, on ‘my’ bike it's already much better. We have already made some changes to the ergonomics in view of the tests in Qatar ".

EB: "They were good even when we were fighting for the title, we get along with each other well".

LM: “I'm great with Enea, we've known each other for a long time and we've always respected each other”.

EB: “If that happens, it means we're making a difference. However, in recent years the performance of the bikes and riders has been much more even, I hope we can be protagonists but we will not on our own anyway ”.

LM: “I hope for this rivalry because we would both go strong, but things have changed in recent years. There are no longer just two or three riders to challenge each other but 12. I don't know if it's easier or more difficult, but it's different than in the past ”.

For the title of rookie of the year there will be three of you with Jorge Martin, all on Ducatis.

EB: “We are three different riders in style and build, it will be a great challenge and I want to win it. But first we have to get on the bike ”.

LM: “It's nice to be all on Ducatis. Martin will have something more than us, but I hope that if we are fast Ducati will give us some updates, as happened last year with Zarco ”.

Have you already got to know your crew chief?

EB: “Of course, I've already met up with Alberto Giribuola 3 or 4 times in order to prepare for the tests in Qatar. The first impression was positive, he is a young guy but he has a lot of experience with Ducati, he has worked with Dovizioso and will be able to teach me a lot ”.

LM: “I will work with Luca Ferraccioli, we talked and discussed our working methods and I have already asked him a lot of questions about the bike and the other riders. We are trying to prepare as best we can for the tests in Qatar, it is a pity we could not test in November, we will have to do our best to make up for the lost time ”.

What are your expectations for the first tests?

EB: “They are not very high, it will be all new and I will have to understand a lot of things and adapt. In MotoGP there is more electronics, a lot of things to fix, it will take time but I'm excited to get started. Each rider has his own times, I want to have fun and I hope the results will come ”.

LM: "None, you just need to get to know the bike, the tyres, the electronics and a different working method. We will have to start calmly ”.

Is testing only at Losail an advantage or a disadvantage?

EB: “It's not good to always lap on the same track, but it will allow me to have more experience for the second race”.

LM: “Testing only on one track is not positive, I remember a winter in Moto2, after nine days of testing in Jerez I wanted to set everything on fire (laughs). By doing so in the second race we might be faster, but we could then suffer for that when we go to other circuits ”.

What do you think the first time on the track on the Ducati MotoGP will be like?

EB: "The emotion is great and the desire even more. I will find a lot of riders with whom I raced in Moto2 and Moto3 ”.

LM: “Everyone labels me as cold and rational, but knowing that I'm riding a MotoGP is incredible, every day I think about what sensations I will feel. The first day is always the best, even in Moto2 it was like that, let alone on a MotoGP! I feel energized and motivated, there is nothing better than riding a MotoGP bike and I want to enjoy every day ".

Have you changed your training for MotoGP?

EB: “I worked harder this winter, in the gym and on the motocross bike”.

LM: “Not much, I’ve been following what Valentino, Morbidelli and Bagnaia are doing”.

Have you received any advice for your MotoGP debut?

EB: “Carlo Pernat, my manager, gives me a lot of advice but only half of it is good (laughs). But it’s are important, he is wise ”.

LM: “I haven't talked to my brother, Franco and Pecco yet, not having tested the bike, I don't know what to ask. There will be time during the season ”.

In the latest episode of the series by Vanessa Guerra: the Spanish champion's GP, Oliveira's secrets, a challenge between Nakagami and Alex Marquez
4 hours 57 min ago