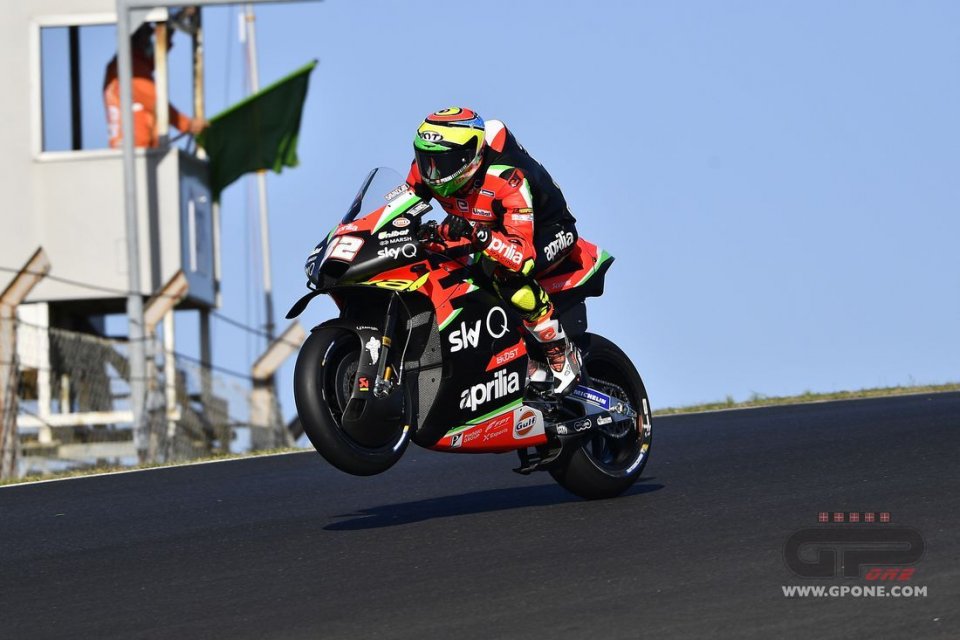 Who will race in MotoGP with Aprilia in 2021 alongside Aleix Espargarò? We don’t have the answer yet and won’t for some time. The name of Lorenzo Savadori appears in the provisional entry list of the next championship, but with a press release the Noale manufacturer explained that it is still deciding between him and Bradley Smith as to who will start the season.

In short, we will still have to wait and until the end of the winter tests.

Below is the press release.

Aleix Espargaró, Lorenzo Savadori and Bradley Smith will be the Aprilia Racing riders for the 2021 MotoGP World Championship season. The forced loss of Andrea Iannone, and above all, the vast amount of time his ordeal took, severely damaged Aprilia Racing, whose only “fault” was remaining loyal to their rider and rightfully trusting in reasonable times for the conclusion of the proceedings.

Over the last few weeks, the names of several riders have been associated with Aprilia Racing, as always happens in the negotiating phase. Some of the possibilities evaluated did not come to fruition independently of Aprilia Racing’s desires, so between the situations that were actually feasible and the possibility of continuing with the three riders who rode the RS-GP this season, the latter was chosen.

Given the clear growth of the RS-GP, which was improved in every area and continued to improve significantly in the final part of the season, this will provide continuity to the project for the upcoming season, which will be crucial in preparing for the subsequent five-year period, during which Aprilia intends to put more bikes on the track and implement a rider search and assessment policy.

Massimo Rivola, Aprilia Racing CEO: “It’s no secret that we offered three young riders an opportunity because we felt that our project could be very interesting for talented young riders, but they did not yet feel ready for the leap and, at the same time, the teams that have already signed them for the 2021 season preferred to keep them. We respectfully acknowledge their decision. We prefer to continue with our riders, rather than choosing solutions that are still open but about which we are not entirely convinced. Even in the difficult conditions of this season, particularly penalising for a fledgling project, the bike improved greatly and significantly reduced the gaps both in the races and in practice on basically all the circuits. Aleix finished on a high note and, even in the race yesterday, was lapping with the same times as the leaders. Lorenzo has also shown significant progress in just three races and we know that we can count on Bradley’s professionalism and experience. Aleix will obviously be our top rider. The roles of second rider and test rider will be decided at the end of the winter test schedule.”