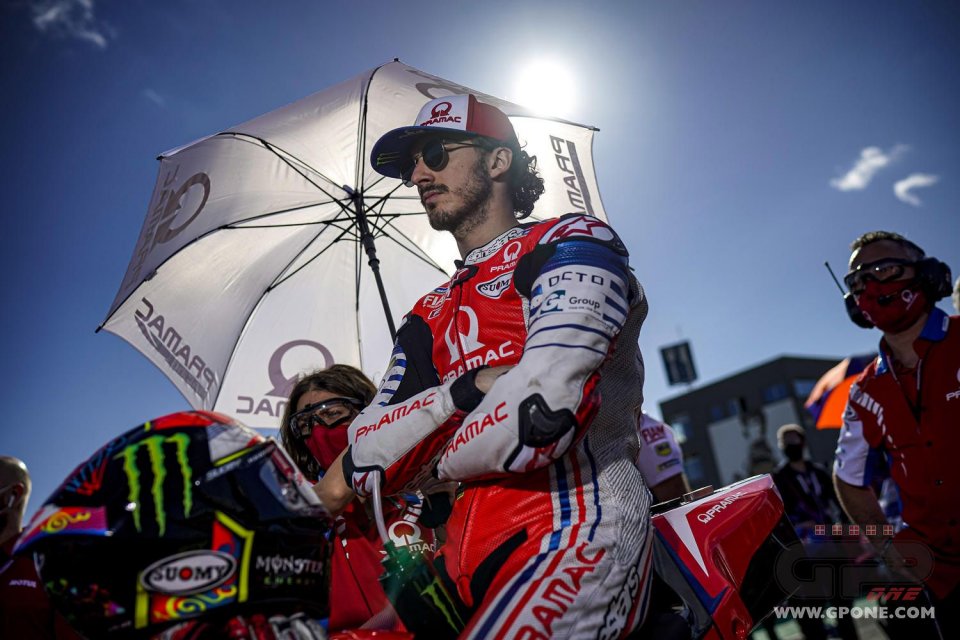 "I only had a few bursts of speed" is the sentence that sums up the season of Pecco Bagnaia, the rider who thrilled and convinced Ducati to give him an official bike for 2021, but who also sometimes disappointed by making a few too many mistakes. Bagnaia, who is in his last Grand Prix on a Pramac bike before heading to the Factory team, is aware that he will have to make a major step forward.

His pride is also stung by the results of two other riders who, between 2019 and 2020, emerged in all their talent in MotoGP and we are talking about Fabio Quartararo and Joan Mir. Bagnaia beat them both soundly in Moto2, so finding them now in front of him in MotoGP is a further reason to improve.

"We certainly had three different approaches to the category - explained Bagnaia talking about his two rivals - Fabio arrived and immediately found himself feeling good, getting on the podium already in his first year, also winning the first two races this year. Mir took a little longer, but then he was the most consistent this year. I only had a few bursts of speed during this year. They are riders I have raced against many times in the past and we have always had fun battling with each other. Next year I hope to be fast, but I think about myself more than anything else. If I can be fast and competitive and consistent, I will be happier also because there are not three of us on the track. It will be essential to beat the others too, not just those two".

It was certainly a strange season. Do you think 2021 will be just as balanced or will you now return to 'normality' now you know the tyres better?

"Hard to say, the situation this year was really strange. Two races on the same track, very little time between one race and another. It was a rather difficult world championship mentally, but also for the various teams, for the mechanics. I think that next year the situation will remain quite similar because now the bikes are all the same, they are very close and there is not one that is better than the others. Probably for this factor, those who can adapt better to a tyre can make the difference. It's a bit like what happened this year, because if we see how things went, Yamaha dominated every now and then, recently Suzuki has been dominating, at Misano it was awesome how fast we were. It is very difficult at the moment to understand what will happen next year. What is certain is that as a factory Ducati rider I will have more responsibility and certainly the ups and downs of this year must no longer happen and I will have to adapt quickly to various situations. That's for sure, but I have a whole winter ahead to grow, to be able to understand all these situations ".

It will be a farewell race for you with the Pramac guys. Does it have a particular significance?

"We have not yet talked about goodbyes, because we have this last race to do. It will certainly be important to be able to have a good race to say goodbye to the team in the best possible way. Let's say that this year things did not go very well for the team, we threw away several races in which we were close to podiums or victories, we were a bit unlucky. But in the end we always did a good job, we always gave our best. I would like to repay them for the trust given to me by Guidotti and by Campinoti and Ducati in these first two years of the MotoGP World Championship. It would be nice to be able to have a good race and say goodbye to them in the best way possible ".

What do you expect from Portimao?

"Portimao is a wonderful, old-fashioned track. One where you really need a lot of nerve. I liked it very much immediately, I was enthusiastic and we also went pretty fast with the road bike, so in my opinion given its layout and knowing our bike, I think it could be a good track for us. But I've been saying it too often lately. I'd like to go really fast first. Certainly I had fun here like I haven't had in years, in all the laps I've done. I can’t wait to ride the MotoGP bike tomorrow, in my opinion it will be a lot of fun and I think it is perfect for my riding style. We will have 25 minutes extra, but it will be important to be very competitive right away. We will be able to work a little more on the bike, so we should all find a good pace for the race. "

In Valencia you expected a lot more than how things went in the race.

"I would say that I expected to do better at Valencia. In FP2 I had lapped in 1'31.1 with used tyres, then in the warm-up I lapped in 1'31.6, in the race to do 32' I had to give my soul instead. I was expecting much more to be honest. There are no precise explanations. In the race conditions are always a bit different, probably my rear tyre was not as good as another rear tyre. But I could certainly have made more of it, I don't know. I struggled a lot with the tyre grip in the race".