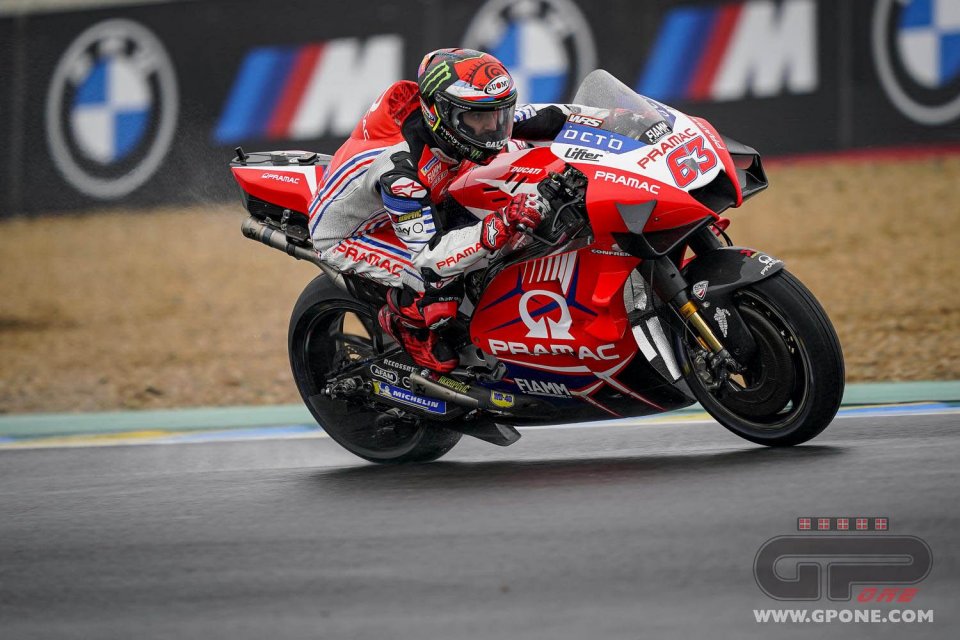 Pecco Bagnaia finished 15th in the combined timesheets on Friday at Valencia, but the result does not really reflect the situation. The Ducati rider did not take advantage of the right moment to set a useful time to be already qualified in Q2, but with the right tyre management strategy he could have done it without any problems.

In wet track conditions Pecco suffered a lot at Le Mans, but here, despite a very low temperature, he managed to find the right sensations in the saddle, perhaps recognizing that he had found a useful way to avoid having another bleak weekend like those at Aragon.

"I came to the conclusion that perhaps this is my limit - commented Bagnaia - when I am not 100% comfortable with the bike I struggle more. I must say that up to Barcelona things were going pretty well. From then on. I always found it cold and I never felt good. It is cold here, but I was more competitive, so I hope I have been able to find a solution. I hope I learned something. At Le Mans the conditions were the same as this afternoon and I was in trouble there, while today I started and was immediately first. I think I have taken a step forward and I hope to be more competitive in the future when I find more complicated situations. It is certainly my main goal ".

Can you tell us how this Friday went?

"This morning I was not bad on the water, on the third lap I was already fast. But then I crashed, at turn two the track was very slippery and I basically crashed straight on. Instead in the afternoon I started and I felt great, I felt sensations that I hadn't had in the saddle for a long time and I immediately went quite fast. We put the new soft on too soon, perhaps a wrong strategy. When I had to do the time attack it was already worn out and I couldn't take advantage of the extra grip of the track which was drying. I made a mistake too, I lost tenths, but all in all it was the best Friday of recent times. "

All in all then it didn't go badly…

"It was better to be in the top ten! Better still if it’s dry tomorrow, but rain is still expected, so I see it’s going to be tough. I will try in any case to enter Q2 and on the water it is always very difficult to understand everything. We will see, I think I have a great potential, better than what we have seen today. For the first time in my life I was going strong in these mixed conditions ".

These are your last three races as a Pramac rider. Have you set yourself any particular goals?

"I would love to get on the podium, maybe give the victory that the team has not achieved for a long time. Unfortunately this year things for me and also for the team in general have not gone very well. In my opinion we could have done many more podiums than we did. But we also had a lot of bad luck. In Misano I could have won and I crashed, Jack could have won at Le Mans and he broke the engine. We weren't very lucky as a team, but I'd like to finish the season in the best possible way ".

You saw Gerloff on the track today. Not bad for a rookie…

"For SBK riders, getting on a MotoGP bike is special, just look at the tyres we have. You can be good on everything, our bikes are not easy, but if you start off on the right foot it's different. In my opinion it was also lucky that this morning it was wet, because MotoGP bikes in the wet are easier to understand, the Michelins in the wet are impressive and he immediately felt comfortable. Seeing the way he rides, it seems that he already has a good style. A positive day for him.”

Jack Miller: "The Ducati works well when there is grip and Valencia has a lot of it"

First in the morning in the wet and the same result in the afternoon, with the track gradually drying: when the going gets tough you can always count on Jack Miller. The Pramac rider got the most out of his Desmosedici and the clock was the proof.

"The wet is not the ideal condition to start a race weekend, but it went well - he commented - The same in the dry, in the afternoon, although in this case there is room for improvement. I started from a standard setup, I still have to improve my confidence in the front, but I'm not talking about anything critical, just normal setup changes. "

The impression is that we will see the Ducatis competitive again at Valencia, not just that of the Australian.

"I think it will be like that - confirmed Jack - Our bike works well when there is grip and this asphalt has a lot of it. So I think we will see a more normal weekend, a little bit like what happened to me at Misano ”.

“He was very good - he complimented him - he threw himself on the track in the worst possible conditions and made no mistake, it was nice to see him riding. Replacing a rider like Valentino and riding a MotoGP for the first time is certainly not an easy thing to do ”.

New sponsor for Franky: the automotive industry is one of the main sectors in which Belotti solutions are applied and have always been appreciated,...
2 days 3 hours ago

MotoAmerica and AMA have given the green light to the RS 660 model to compete in the Twins Cup starting next season in compliance with the...
4 days 23 hours ago

For 2021, Herrera will take part in the WorldSSP Challenge, featuring at the European stages of the championship, which currently make up the first...
5 days 3 hours ago

Friday, February 27th, at 6 pm, live streaming on the team’s social media channels, but also on GPOne, Facebook, and YouTube: presentation of the...
6 days 3 hours ago

Moriwaki won the inaugural Moto2 world championship with Toni Elias: "Toni won riding the MD600, one of the best achievements in Moriwaki's history,...
1 week 2 hours ago

The Indonesian track is one of the reserves on the MotoGP calendar: “It recently flooded, but our drainage system worked.”
1 week 23 hours ago