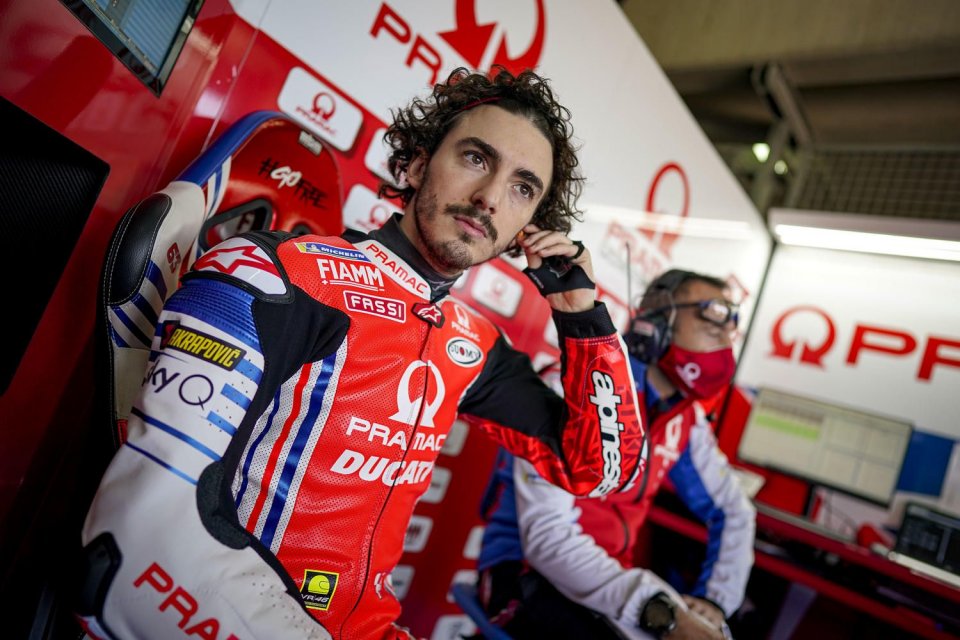 Pecco Bagnaia has a great desire to return to Valencia at the same level of competitiveness shown at Misano and Barcelona. The double-header races at Aragon were simply disastrous for the future Ducati factory rider and getting back to competing for the podium in this final part of the season represents a sort of moral obligation in view of the great change that Pecco is gearing up for in view of 2021.

Bagnaia is determined to change the inertia of this part of the season by turning the situation around, having now perfectly understood what the problem is. On the one hand, his particular riding style makes it possible to maintain the grip of the Michelins in the race, but on the other hand it represents a problem given the characteristics of the French tyres this season. But there is a solution.

"In the end, the question is simple - said Bagnaia - on the Ducati the problems disappear only when you push 100%. With these tyres it is essential to get on the track and go straight to the maximum, something that Miller does well and that I still have to learn to do. Here I think we can have a nice weekend, even if I have never achieved much at Valencia. I seem to remember I finished fourth in 2017, but I am sure I can do a good race because this track resembles Misano and Jerez a bit, so this gives me confidence and I think I can get back to that level here. "

Are you already working with Dall'Igna also in view of 2021?

"I’ve talked to Dall'Igna, we always work together to find solutions. The problem is that it is still difficult to understand everything perfectly, because this season there are tracks where we have been very strong despite having suffered in 2019 and vice versa, tracks where we were fast and this year we found ourselves slow. There is no solution at the moment, we do the last three races and then we will all draw a line under everything together to see how the season went. "

Has there already been any briefing in which you discussed the development plan for the future?

"Ducati technicians take notes at every single outing on the track of each rider. Preparing the material for 2021 is not done in a single session, in a meeting. They know what to do, I wouldn’t know what needs to be done on the bike to develop it, on the contrary. At Jerez and Misano my bike was really good, cornered well and had no problems, while at Aragon I struggled a lot. It's hard to say something in those moments, surely we should find a way to warm up the tyres first, this would be something that could help us a lot ".

Brivio joked that having only two riders helps Suzuki because there isn't too much information. Ducati has a lot more riders, do you think this may have been a problem?

"In my opinion Suzuki can't find a team where to put two more bikes, but it would like to have two more bikes on the track, it’s been trying to do it for a long time. More information can only help. They too have said several times that they would like a satellite team to carry out development ".

Do you rate the 2020 Michelin or would you like to go back to the old tyres?

"I feel fine with the 2020 tyre, I feel good and have never had any problems. When I was able to push I felt better than last year. The temperatures affect the warming of the tyres a lot and I generally suffer when it's colder, I have to learn to be more aggressive. Miller is a master at this, while I manage to be fast when things are perfect. Jack exploits the full potential of the tyre and the bike always."

Do you think Ducati can give you something extra to be more competitive, did you expect some more new developments?

"Ducati has always given us everything we need to be fast. In my opinion it is the riders who have to make the difference, we saw that at Misano, Jerez. At Brno Johann Zarco went very fast. This year everyone is very fast, it doesn't take much to get left behind. At Aragon I improved my best time by a second and this year I started further back, the level is incredible. A tenth makes a huge difference and I think that only the rider can be so decisive. "

Will you stay in Valencia for this double race?

"As per Dorna directives we will stay here. They don't force us to do anything, but they asked us to stay here and since I don't want to risk staying at home, I'll stay here. The days will be long, it will be difficult, but we can make this sacrifice and manage. Mir said he was afraid, and I feel the same way as well. When the world championship ends I will stay at home for a while, also because I fear that in Italy everything will soon be shut down again. I am terrified of staying ten days stuck in a hotel around the world. Travelling on an airliner in this period scares me, you never know what can happen".

Did you hear from Valentino, do you know how he is?

"I don’t have any different news to you on Valentino's conditions. I know he is waiting for the result of the swab. Staying at home for so many races is very hard for him, I think the only time was in 2010 and then in 2017 I seem to remember. It’s strange not to have him here and I hope he will be back soon".