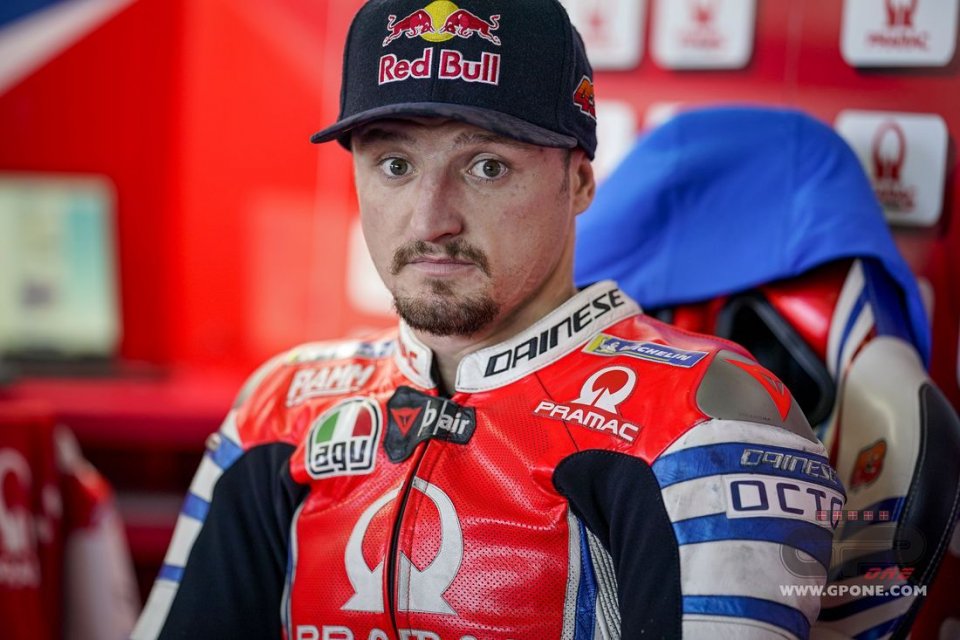 “What is happening here at Ducati? I don't know what to say, if I had the answer I would have solved the problem”. Jack Miller is also forced to spread his arms and settle for the fifth row to start tomorrow’s race from 14th position.

His is the best of the Desmosedici GP20s, if you want to see the glass half full at all costs, but even the Australian knows it would be a bit of a stretch. Especially as he knows that his rear tyre, on his second exit in Q1, had something wrong with it.

“It just didn't work - he said – That’s all, it had no grip and that was the main problem”.

The problem that changed his qualifying session and also that of Dovizioso, who was behind him and could have used his slipstream.

"I didn't help him, he was just behind me, but it wasn't anything planned," Jack explained.

Tomorrow will be difficult and it will be for all the Ducatis, despite the fact that this is the second weekend at Aragon and the amount of data should be enough to find some light at the end of the tunnel.

"It's the second weekend, we are on the same track and I did practically the same time – admitted Miller, although in truth today's qualifying time was a couple of tenths worse than last Saturday - I made a lot of changes on the bike to find more grip at the rear, but I couldn't. I watched Q2: in two weeks I haven’t been able to do the last corner like the other riders do on every lap. I will continue to try, to give my best, even tomorrow. Marquez and Mir, two riders who were on the podium last week, will start in the row in front of me. For the rest, I can only cross my fingers hoping that something magical will happen, but I don't think it will”.

After talking about his day, the Pramac rider once again commented on the rule that a lap time is automatically cancelled if you pass in an area where there is a yellow flag.

“It seems a stupid rule to me - he declared bluntly - I mean, most of the time, after a crash, the bike and rider are not in a dangerous position and it seems stupid to cancel the time anyway. I would agree instead to increase the penalty if you crash creating a dangerous situation. I don’t make the rules and just look at what Race Direction has done for Moto3. They decided on tougher punishments for riders who are waiting on the track in that class, but the same thing happens in Moto2 and MotoGP too. We should set a good example to younger riders, if heavier penalties are decided it must be done for all classes, not just for one ”.