Tito Rabat decided not to speak last weekend, canceling all meetings with journalists. A way to disconnect from the constant rumors about his future, about the arrival of Luca Marini on his Ducati. Today, however, the Spanish rider changed his mind and resumed his press conferences.

He appeared cheerful and calm and ready to joke.

“I didn’t want people to think I was angry or anything, so here I am,” he said. “But I don’t have much to say, except that I’m only think about the present and in doing my best this weekend.”

Yet everyone is still really curious, because the rumors about the agreement between Avintia and Marini claim that it’s almost a done deal and, therefore, Tito won’t have a place in the MotoGP anymore. How does all this affect him?

“A few weeks ago, all this made me more nervous, but now it doesn’t. I have four races left this year, and I want to take advantage of it,” he  stated. “Better to only worry  about the present. You reach a point where you break down, and it’s best to think about the present in order to survive.”

“I don’t know anything about next year. I can’t see beyond this weekend,” he said  smiling. “It’s not worth thinking about. Better stay focused and give one hundred percent.”

Despite everything, Rabat’s results this year were not exceptional. In the standings, he has only eight points after ten races, but the Spanish rider doesn’t want to argue about it and  offers  a different point of view.

“I took twenty-five seconds from the winner last week. A few years ago,  with that gap, you were in the top positions,”  he explained, “Now, in the MotoGP, the level of the riders and bikes is very high, but I’m also sure that my level is not lower than that of most of the other riders. I know this because I train with some of them, and I can see it. I could bet on it. I’m fit, and have the desire and the level to be a MotoGP rider." 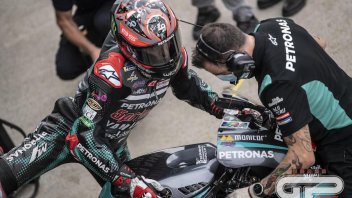