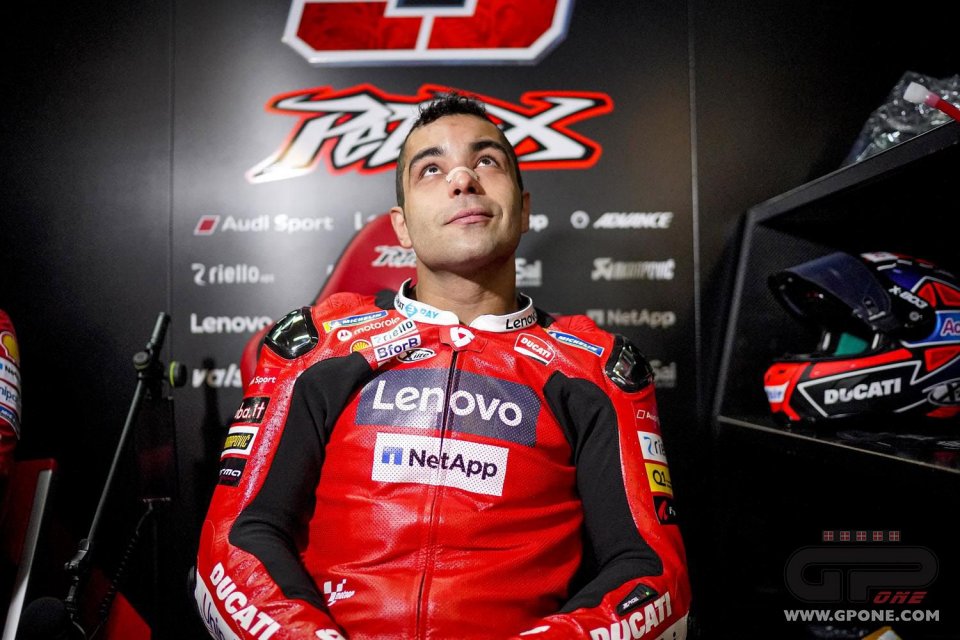 Danilo Petrucci was the protagonist of a good qualifying session at Aragon. He managed to get through into Q2, where he took a third row grid position, a result that all in all can be viewed as positive, especially considering the conditions of yesterday. Yet the key focus during his meeting with the media did not directly concern his performance on the track, but rather Dovizioso’s failure to get into Q2, almost as if it had depended on something Petrucci had done wrong.

Danilo only took advantage of Dovizioso's slipstream, which happened to him twice on the track. He did it as he would have done with any other rider and saying this was the reason for Dovizioso's failure to qualify for Q2 seems ungenerous towards a rider who has given his all in a difficult situation, because we must always keep in mind that Petrucci has raced the entire 2020 season in a house divided with Ducati: a situation that Danilo himself explained perfectly.

"In 2019 I was racing for Ducati. At the beginning of 2020 I was sent away, so I'm racing for myself - declared Petrucci - it's clear that if I get some indications from Ducati I will respect them until the last race. But as I said, here I have not received any indications and I have to do my best. It's a shame that I was dumped before the season started. "

So you confirm that there was no agreement with Dovizioso?

"We didn't talk, Dovi and I. I think we are free to race and it’s qualifying. I used all my weapons to get into Q2, for sure we’re suffering, In Le Mans we weren’t struggling. There is no team orders, I'm very sorry that Andrea is out of Q2. I’m racing for myself, and recovering from a bad first part of the season and I have to use all the chance I have. I just thought about doing my best and nothing else. Of course I used Andrea as a tow, but if he had entered Q2 I would have to answer the question 'why aren't you in Q2?'. I did not receive orders, I was only told to do my best. "

"You’re talking about team orders for a qualifying session of one race out of 14 - Petrucci replied a bit annoyed - you are making a case out of it because I used Andrea as a benchmark because my bike goes 10 km/h slower. You are doing everything because I got a tow from Andrea and he was out? For sure I'm sorry for Andrea. We have no orders, I used my weapons. At Le Mans I was faster, I didn't need a tow. Here, on the other hand, I needed it and I'm sorry that it was Andrea who gave it to me. I'm very sorry for him, I'll talk to him. But tomorrow is another day, we'll just do our race and that's it. "

At least you are having a positive moment, you have returned to consistently good levels…

"I found a good set-up with the bike in the Misano tests and in Barcelona I felt very good with the bike, as well as at Le Mans. Here I have an excellent feeling under braking but we are missing something, we lack the necessary grip to make the bike slide in the curve. We are all struggling with the Ducatis, but I'm in the middle. The low temperatures are helping me, but the problem is that there is little grip here and we have always suffered a lot in these conditions. "

What do you expect tomorrow, at least there is no dreaded wind to cause any more problems…

"With less wind it's easy, but there just wasn't any today. The problem is that the asphalt is very old here, it has never been redone. We depend too much on the rear tyre and we have to wait for it to have good traction before turning into the corners. We lose a lot of speed in the corners, it's difficult to keep a good pace. I don't know the pace of the best riders, but I know that now we are suffering too much and we have to work on it. "

“Is the Honda difficult? All MotoGPs are. It depends on the rider. Tonight my head will work a lot, and tomorrow it’ll be better.”
5 hours 11 min ago

"We tried some small new things and I'm confident". Martin: "I have pain in my neck after yesterday's crash, but I'm happy with today's improvements"
18 hours 52 min ago