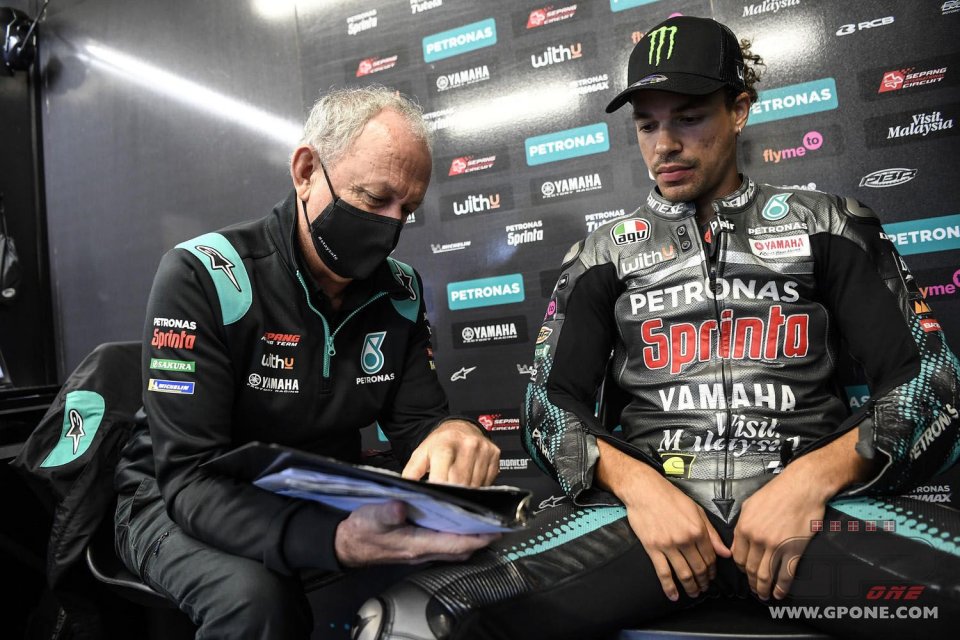 Franco Morbidelli is always smiling, calm. He almost never has fits of anger even if things don't go quite right. Le Mans was a half disaster on Sunday in the race, while until the warm-up it seemed as if he was on his way towards a second win of the season after the one at Misano. Unfortunately the Team Petronas rider did not pick up the result he could have but this did nothing else but renew his energy in view of the double round at Aragon, a track he really likes and on which he is ready to do the business.

But before talking about the Aragon round, in the meeting with journalists before the race weekend, we asked Morbidelli to tell us what he thinks about the work being done by Jorge Lorenzo as a tester this season. At Portimao, the Spaniard lapped very slowly, setting a time that was over two and a half seconds behind Pirro with the Ducati. Morbidelli offered his point of view on the situation.

"We have seen that due to Covid this season, the testers have not been able to do many kilometres on the track - said Morbidelli - it almost seems like they spent more time in the garage than on the track, due to force majeure. Jorge is a great rider, with a lot of experience and sensitivity. I am convinced that he can give a hand to Yamaha. We need the situation in the world to improve so that the testers can do their job."

From a certain point of view, you also have your feet in two shoes, especially if also in 2021 you should have the current package available and not a Factory bike…

"I also make this selfish reasoning. For the package I have, the less progress the factory riders make, the better it is for me, because in this way the gap between my bike and theirs will remain the same. I hope the situation in the world improves, but at the same time if I look at myself, I hope that the official manufacturers do not go too far ahead because I am having a lot of fun being in front of them, and I would like to continue to do so ".

But are you already sure you will have the current package also next season?

"It’s not said yet if I will have this package or not. I spoke with Razali, with Wilco also and Stiggy and told them what my ‘wish for Christmas’ is. It doesn’t depend just on my track performance, there are other things. But of course my performance on track makes a huge difference to the choice and on the level of effort that the team is going to make for me. My aim is to control what I can control and put down on track the best performances I can, so that the team think very well about the machine they want to supply to me next year, and make Yamaha think very well about the package to give me for the future ".

Now let's talk about the present and Aragon. What do you expect from this weekend?

"I was really looking forward to getting here to race in Aragon. I really like this track, in my first year of the world championship in 2014 I rode a lot here and it's a layout that I like. I also won here, so it gives me some good emotions racing here and I think the Yamaha can be really fast. We were fast at Le Mans as well, I'm sure we'll bring all that speed here too. Then I've been having a lot of fun with the team lately, I'm having fun on the bike, so I really can’t wait to go out on track ".

Last year it didn't go very well for you…

"In 2019 it wasn’t an exciting weekend for me, I had a lot of ups and downs. But this year the story is different and I hope it is the same here. I am excited, as I was at Le Mans, because there I think I missed a great opportunity. I'm ready to push hard, that's the truth. "

Do the straights scare you? Power is important here and we know Yamaha's situation compared to some rivals…

"Certainly the straights will be a problem here, but it is a characteristic of our bike. What we lose in the straight we gain in the corners and I think it will be the same here. The doubt of course is always whether we will be able to gain more than what we lose on the straight and it is a question we ask ourselves every time we go to tracks with long straights. The sure thing is that our strong point is the corners, there we are always fast ".

Low temperatures are expected. Could the second corner be a problem?

"The second corner will be tough because the conditions will be tough. There will be wind, the temperature will be low and we will get to that corner after spending a lot of time on the left side of the tyre. Then we get there and it's a fast corner too, it will be tough. Michelin has brought several soft rubber options for both the rear and the front and I believe they will adapt well both to our bike and to the temperatures we will encounter. But this is the situation, so we will simply have to take things easy at first. "

Did you know what went wrong at Le Mans?

"In my opinion I wanted to control the race too much and when I really pushed hard the tyres were not ready. In general our speed was good, on Sunday morning I was very strong in the warm-up on very used tyres. I will try to bring that pace here, while at Aragon in the race I made a mistake when Vale crashed, because in trying to do the chicane in the same way I must have lost seven or even eight positions. Then in my approach to racing in the wet I have to improve a lot. I'm also fast, but not consistent, so I have to improve ".