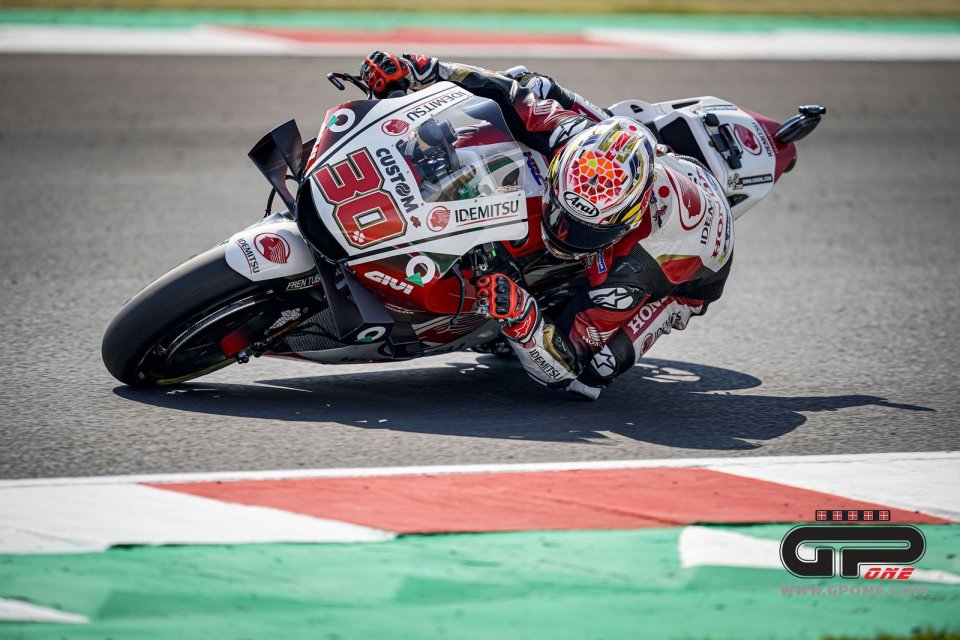 With ninth place in the world championship, just 23 points from the top, Takaaki Nakagami is the best Honda rider on the track… and one of only two left after the forced departure of Marc Marquez and then Cal Crutchlow.

In the second Misano round, Stefan Bradl was also forced to abandon, leaving Taka and Alex Marquez as the only two riders representing Honda. Is that a bad or a good thing?

“From my point of view it is negative - replied Nakagami without hesitation - Unfortunately Crutchlow pulled out last week and now that Stefan has also left it's just me and Alex, we have less data to use during the weekend. It is certainly not the best situation for us and for Honda ”.

However, you will get more support from HRC, with probably a relative increase in pressure…

“I don’t have more pressure. Obviously, there were a lot of Honda engineers in my garage during the tests last Tuesday, but today we are calm. And from the point of view of strategy, nothing changes. Obviously, I am very sorry for Honda, but I am focused on my work: I would like to score my first podium this weekend. We will do our best because last Sunday didn't go very well, but as you have noticed, today we have improved a lot. It will be difficult to take pole, but my target is the front row ”.

In the combined times of the first two sessions Takaaki took the second fastest time, just two thousandths from Brad Binder's KTM and ahead of Quartararo. Sign of a better set-up also for the numerous undulations in the asphalt that were a problem last weekend?

“As for the bumps, it depends a lot on the trajectories: a few centimetres are enough and you're on them and the bike is very sensitive. Last week I looked for other lines, also changing the lean angle but without having much improvement. In the third sector, however, I am behind only Quartararo, and also in sector 4 I am doing quite well. The feeling with the bike is good. Last week was a disaster but now we have improved.”

“Yes, I tried Bradl's 2020 bike, and I didn't experience any negative feelings. As a first impression, the bike is not bad, and the times with the soft tyres are consistent, too bad he crashed at turn 2 due to a dip ”.

Would you use it immediately, if given the chance?

"At the moment I feel more comfortable with the 2019 bike due to the set-up and the character of the engine but riding the 2020 more often I could go better. Obviously, if HRC asked me to ride it until the end of the championship, I would say yes. "

“We have been unlucky: first Marc's bad accident, then Cal's problems and now Stefan's. Luckily, we raced here last Sunday and then we had tests on Tuesday so we have enough data, but I don't know how it will go next week in Barcelona. However, HRC is supporting us well, they help us during and after the sessions".

Who would you like to have alongside you at Montmelò?

“I hope to have Cal by my side. Obviously, we have different bikes, the engine is different but the chassis is very similar. I don't see any other solutions. It is not possible to have Bautista, because he is concentrated on Superbike”.

You are still without a contract for 2021, have you started talking about it?

"After the tests I talked a bit with Kuwata-san, but we are only at the beginning. However, the reports are positive and we have time. We will talk again before Montmelò”.