On Thursday Franco Morbidelli and Johann Zarco will be summoned by the FIM Stewards to decide if there is any blame in the incident that saw them involved last Sunday at the Red Bull Ring. In the collision between them, two riders who risked the most were Valentino Rossi and Maverick Vinales, who were both just missed by Franco's bike, which passed between them almost to the millimetre.

In the heat of the moment, the Doctor had accused Johann of having voluntarily caused a dangerous situation. A few days after the accident, Valentino returned to the matter on his social media profiles, adding the words to the video you see above.

These are his words, in which he recognizes the involuntary nature of what Johann did while not justifying it.

“The images from my TV camera are the ones that scare me the most, because from here you can understand the speed with which Franco's bike crossed the track right in front of me. It passed so fast that I didn't even see it, when I got back to the pits, I was already shaken enough to have seen Zarco's bike literally fly over Maverick's head. Miraculously, nobody got hurt but I hope this incident makes everyone think, especially us riders. Zarco did not intentionally cause such a ‘pileup’, but it is still a serious error of judgement, which a MotoGP rider cannot afford to make, especially in braking at 310 km/h. Moving quickly to the right and braking "in the face" of Franco, he didn't give him room to slow down, so Morbidelli couldn't help but hit him at full speed. I understand that in the race we fight a lot and everyone gives their best to stay in front, but we must not forget that ours is a dangerous sport and our safety and that of our adversaries is much more important than gaining a position. " 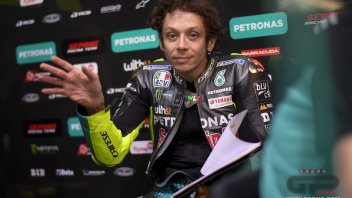 Rossi: “The new frame? Similar to the old one, and I have no rear grip.”