At the end of Saturday at the Red Bull Ring, Carlo Pernat commented on the day live with us. Not only the qualifying, but above all the news of Andrea Dovizioso's farewell to Ducati after years together.

The Genoese manager sided with Dovi, no 'ifs' and no 'buts'.

Above you can see the full video, below you can read some excerpts.

"I'm not surprised because it was clear that Ducati no longer had any confidence in Dovizioso, otherwise it would not have brought his hypothetical renewal up to this point – said Pernat - Every company has the right to do what it wants, like every rider, however they had at home what was the first of the humans for three years, the rider who has beaten Marquez many times and taken Ducati to the top. You can get divorced, but frankly you don't do that after 8 years. A rider like Andrea shouldn't have been treated like that. It could all have been solved earlier, you had to tell him first that he was no longer in their agenda. I will cheer for Dovizioso to win the World Championship title; it would be the best gift for him and Ducati ”.

For the Italian manager, things could not have gone any differently...

“Andrea and Battistella did the right thing, they were fed up. The negotiations never took off. The rider always decides, but his manager did everything he could. I'm not discussing Ducati's desire to rejuvenate its riders, but the way it did it,” he underlined.

Now the race has opened for the place vacated by Dovi…

“Personally, I don't see Zarco in the factory team, I wouldn’t take Lorenzo, maybe I would give him a 20% chance. Instead I give a lot more to Bagnaia, otherwise this whole operation would not make sense, 60% Pecco will go to the factory team. The Iannone option I see very difficult" he said.

So, what will Dovizioso's future be?

"A couple of months ago there was contact between KTM and Dovizioso, but Andrea had preferred to stay with Ducati. At that moment Dovi's value was very high because it was not known even if his bike was fast, now KTM knows it has the bike to win - he observed - A year ago we said: either he stays in Ducati, or he goes to KTM, or he stops. The first option is no longer there and I'm starting to fear that only the third will remain and it would be detrimental to everyone".

The ball seems to be in the hands of Aprilia…

“If I were Rivola, I would go to Colaninno and ask him to take Dovizioso, to increase the development budget and I would guarantee the results. If he doesn't, he'll be making a big mistake”.

If Bagnaia were to go to the factory team, Pramac would have to revamp its whole team.

“The key point is Martin, KTM also confirmed it to me - revealed Carlo - Then I don't deny that there have been contacts for Bastianini, but it doesn't mean that a contract will be signed. Enea has always stated that Ducati is his passion. KTM has also come forward, but it would be a question of staying in Moto2 next year and then going up to MotoGP in 2022 ”. 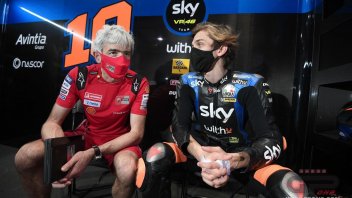 In addition to Donington Park, the BSB riders will be in action in three further practice sessions at Silverstone, Snetterton and Oulton Park before...
16 hours 41 min ago

In Qatar, the first day of the Sky VR46 Avintia team rider in a selection of images on and off the track
17 hours 4 min ago