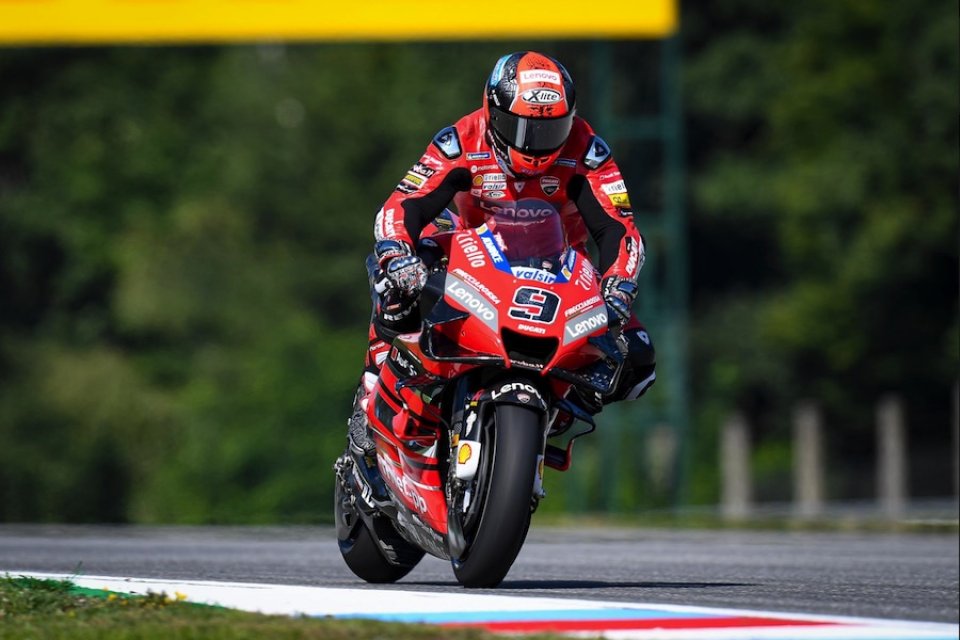 It is a bit of a bruised and battered Ducati that emerged from the first two sessions of the Brno weekend, the third of the season after the Jerez back-to-back. The dents come from the forfeit of Pecco Bagnaia, the best Ducati rider in Andalusia before his engine failed, and who has now ended up in hospital with a fractured tibia. The difficulties are, however, all for Andrea Dovizioso and Danilo Petrucci, respectively 15th and 14th in the combined standings and who were the protagonists of a forgettable afternoon.

"The arrival of this new rear tire has shuffled the cards on the table - Danilo Petrucci told us at the end of FP2 - We did not expect such a difference, I have been on this bike for years and I had learned to ride it in a certain way. Now it is no longer possible. In Qatar I did a quick race simulation, just like the one this morning and it was not hot on both occasions. Unfortunately, this year even two-tenths make a big difference and our bike does not respond consistently under braking and the behaviour also changes in relation to the track conditions. We are looking for a consistency that is not there at the moment and for this reason we are unable, with the team, to make changes ".

Danilo, in the past few seasons the Ducati always seemed to be the most complete machine, on a par, if not better, than Marc Marquez's Honda. This year, however, you have started a bit further down. Doesn't the arrival of other manufacturers like KTM make you think that this could be the last chance for Borgo Panigale to take home the championship?

“Surely our opponents have got closer and making a difference is becoming difficult. We are at the beginning of the development of these bikes and only the KTM and Aprilia have progressed thanks to the concessions. From September many things could change given the drop in temperatures, which is good for us, but now we are not in the top 4 on the grid ".

The big absentee of this weekend (and the next ones) will be Marc Marquez who had to have another operation after breaking - according to Alberto Puig - the titanium plate he had in his shoulder opening a window. Puig also declared that winning a championship without Marquez is worth less. Do you agree? Does the 2020 title have a different meaning?

“This is a championship like any other. Marquez got hurt but we all started in the same condition and injuries are part of the game. Alberto may have his point of view but I don't think the winner of this season will be worth less than the winner of any other championship ”.

Dovizioso has been second in the world championship for 3 years now. Do you think finishing in that position this year would be even more demoralizing for him since Marquez is not in first place?

"The values ​​on the track are not yet well defined, if I had been in Dovizioso's shoes in the past few years it would have always hurt me to finish second, I hope that this year he can fight to the end like in 2017 and that maybe it goes better. At the moment Quartararo is fast in all conditions and it seems difficult to unseat him ”.

What race are you expecting on Sunday? Do Yamaha have something more?

“At the moment Yamaha and Suzuki are fast, we have to work and I don't know what race to expect. The degradation of the tire will be the key to the race as already after 6 laps the tires drop a lot, I can’t imagine after 20. With our work we can get among the best too, this morning I thought I would be fighting for the podium, this afternoon no ".

Today another injury: that of Pecco Bagnaia. What are all these crashes due to? Too much desire to race after a period without bikes?

"There is incredible competitiveness and even a tenth of a second can move you up a lot of positions. We are at the limit and this is why we are seeing so many crashes, as well as the conditions of the tracks where we raced since it was very hot in Jerez and here in Brno they have not redone the asphalt for 12 years and it is full of holes, it is one of the worst in the championship. We all have little grip and we are a long way from the times we did on this track a few years ago ”.

MotoAmerica and AMA have given the green light to the RS 660 model to compete in the Twins Cup starting next season in compliance with the...
1 day 58 min ago

The Indonesian track is one of the reserves on the MotoGP calendar: “It recently flooded, but our drainage system worked.”
4 days 51 min ago