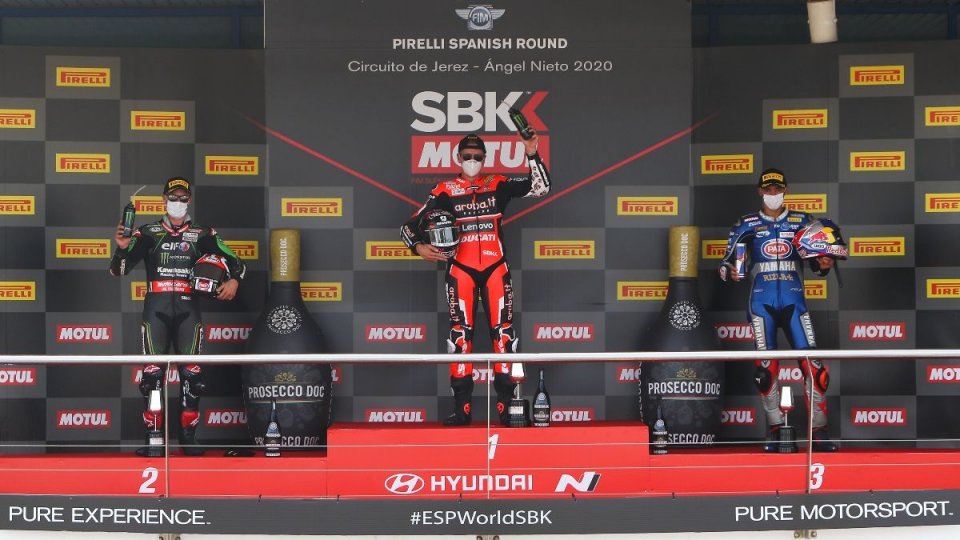 Johnny Rea tried to make a break, but this time he could do nothing. Race 1 at Jerez left the Kawasaki rider a bit disappointed after he was forced to settle for second place behind his fellow Brit.

The five-time world champion had to settle for the runner-up place, but he is satisfied with having lost only five points to the Aruba rider.

“I think it was one of my best performances here in Jerez - Johnny said - this is not one of my best tracks as you know. Today I struggled for most of the race with the front, as I probably didn't have the best set-up. In some areas, however, I felt I was performing better than Scott, even if I was struggling out of the corners. As I said, this is not the best track for me and therefore I am satisfied with the result ".

Johnny, like all the other riders, also had to deal with the heat…

“Today we raced in over 60 degrees and it was really complicated, especially because of high temperatures. It's a truly unusual situation for all of us, but we have to live with it given the calendar ”.

How much do you think the speed of the Kawasaki influenced compared with the Ducati?

“I don't think it's a question of speed, given that in the past on tracks like Argentina and Qatar or Portimao, I didn't suffer the power of their engine. What I can say is that the balance of the bike matters the most. Today I had to fight with the front of my ZX-10RR, since it wasn’t OK."

Scott showed his muscles the moment he overtook you. Did you expect that attack?

"I thought Scott was going to overtake me and waited for his attack, maybe I wouldn't have done the way that he did, but it doesn't matter, it's not a problem. With the Kawasaki I have always felt good on braking, but I know I have to do something to improve. Tomorrow is another day and I will give it another go. "

You started well, did you think about getting away or was it too much to think of in this heat?

“I didn't have a well-defined strategy, I only thought about doing a good race and trying to manage the rhythm I had in mind. I was surprised at my pace, it wasn't bad at all, but I will have to do something more on Sunday. The key will be to find a better balance, especially at the front, which represents the biggest problem with this bike. "

What struck you about Redding? For the first time there was a direct head-to-head between you…

"The Ducati has electronics that allow it to be a stable bike, unlike my bike which moves around much more than his. This is as far as today's race is concerned, but if I find the right set-up I can definitely improve "

Riding the VisionTrack PBM Ducati V4R, the Australian won his second career laurel in the UK’s domestic championship at the end of an exciting season...
6 hours 47 min ago