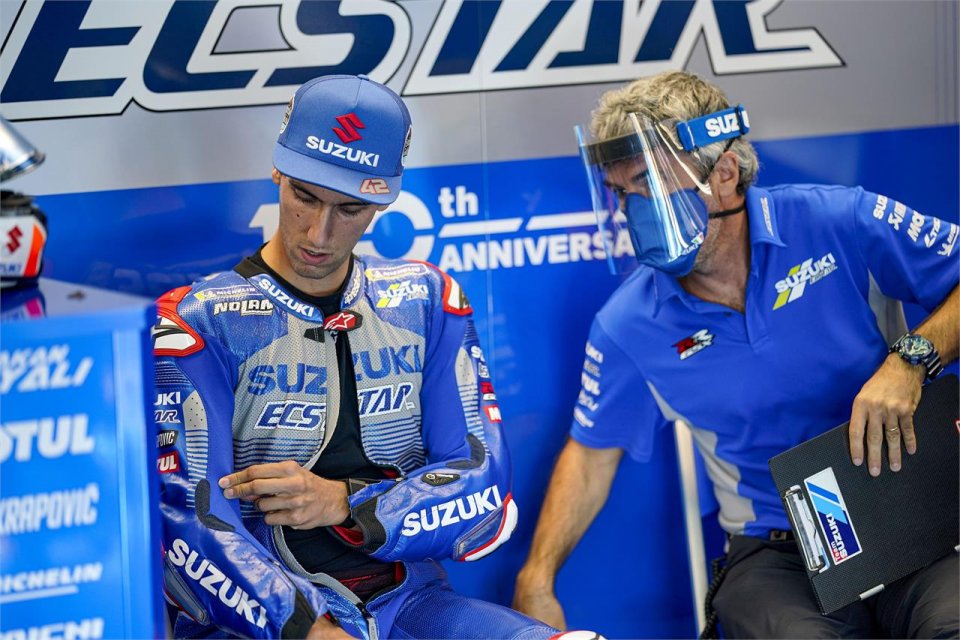 While waiting to know what Marquez's conditions will be tomorrow on the Honda, today it was Rins and Crutchlow who put themselves to the test on the track. And it was tough for both, as we saw by the end-of-the-day standings, with the Suzuki rider last and the Honda one preceding him.

Cal didn't show up at the scheduled press conference in the afternoon, preferring to go to the Mobile Clinic to continue with his therapy. "On the bike, I felt a bit strange, but I didn't feel that much pain in my wrist," he stated. "The team and Honda are not forcing me. I'll continue to work to feel more comfortable on the bike."

This is also Alex Rins' goal, but he was hoping to feel better riding his GSX-RR.

“I'd like to say that it was a good day but, instead, I have say that it was a painful and difficult day," the Spanish rider admitted. "I felt a lot of pain on the bike. I thought it would be less. Before I started the FP1, I thought I could ride well, but that wasn't possible. I didn't take painkillers in the morning. I did in the afternoon, but it wasn't enough."

Yet not everything went badly.

"The positive aspect is that, at the end of the day, my shoulder wasn't very inflamed. Thas means I'm not putting my tendons at risk," he specified. "But I'm in a lot of pain, I have to be honest. If we had raced today, I wouldn't have been able to finish the race."

Alex, however, doesn't want to throw in the towel, even if he's aware that he has to be careful.

"Let's see how I'am tomorrow. If I realize I don't have enough strength, then I'll stop, because I don't want to be a risk for myself or for the other riders,"  he promised. "I was at my limit today, but I never exceeded it."

The team is trying to make the Suzuki as gentle as possible.

“We worked on the electronics, in order to soften delivery. Even a bit too much. The first time I went out, I felt like I was riding a Moto3. I went back to the garage and asked for more horsepower," Alex said with a smile.

But he was clear on one thing: he doesn't want to do crazy things.

“I know that people believe we riders are a little crazy," Rins joked. "My goal is to race and bring home some points. Each rider knows his own limits, and I know mine well. If I feel I'm becoming a danger to others, then I'll stop."

And the climate in Jerez doesn't help either.

"It might be worse than in Malaysia, because you don't have the opportunity to rest on this track, not even on the straight," he said. "As far as I'm concerned, I feel pain especially when braking with the bike tilted and in right corners."